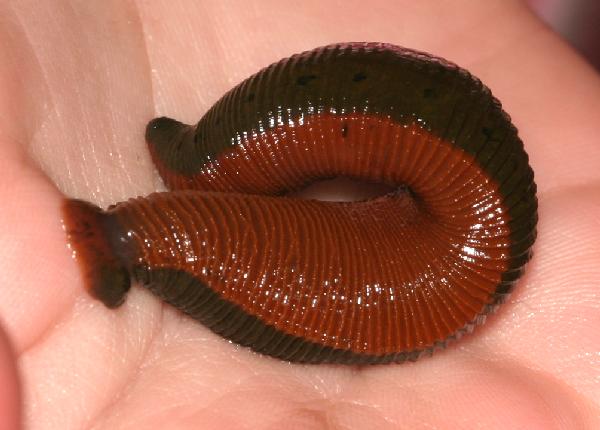 A naturalist must cope with whatever Nature deals out.  Once when I took a course in invertebrates, I had to walk through shallow, warm ponds in the middle of summer, an action that would surely attract leeches (known by some as bloodsuckers).  Sure enough, after traipsing through one particularly muddy body of water, I looked down to discover that one had attached to my leg.  It was not only attached, but was apparently feeding: it wouldn’t let go.

When one’s life blood is being sucked out by a predator, one does not always behave rationally.  Not entertaining the notion of spraying an offensive chemical on the animal so it would let go on its own, I used my fingernails to scrape it off.  Not a good idea.  The wound bled and bled, taking twenty minutes or so to stop.  Thus, I learned about the anti-coagulant properties of leech saliva: leech bites don’t readily stop bleeding because the creature injects hirudin, an chemical that prevents the blood from clotting.

The wound didn’t hurt—I am told the clever leech employs an anesthetic as well as an anti-coagulant.  It would never do to annoy a mammal to the point it would forcibly remove the animal feeding off it.: better to feed quietly and drop off to browse, sated with food and satisfied for any number of months to come.

This predator leech—the word “predator” is more appropriate than “parasite” since it feeds for only minutes instead of days and months—was Macrobdella decora, the American medicinal leech, the red-bellied leech.  As its name implies, it sports an attractively decorated array of red spots, a possible design pattern for a necktie or a scarf.  The animal is a distant relative of the earthworm with its concentric rings that encircle its body, marking off no fewer than 34 segments.

While the practice of leeching, using leeches to bleed patients, has fallen into disfavor since the nineteenth century, it still is occasionally employed in modern medicine whenever it is necessary to increase circulation to a blood-starved part of the body such as a newly reattached finger that has been accidently cut off, for example.  I remember distinctly that in our own Munson hospital not too many years ago, a young girl had a finger reattached and submitted to treatment with leeches.  “It’s kissing my finger,” she would tell visitors.  Indeed, in a way, it was.

Most leeches do not feed upon mammals, preferring frogs, fish, and, especially, snapping turtles.  Some do not attack large animals at all, being satisfied with earthworms and smaller creatures found in water.  One of the largest leeches to be found in the area, its body extending a full six inches or more, seldom feeds on humans or their pets–the horse leech, Haemopis marmorata.  I have observed this creature in Lime Lake, Leelanau County, where it can be seen rapidly scudding across the marly bottom, fully as capable of swimming as a fish.

Horse leeches sometimes are found on mud at the edge of the water.  If they are grabbed to use for bait—as bass or walleye fishermen will occasionally do—they will readily try to climb out of the bucket, unlike other more docile species.

Leeches are given a bad rap.  They seldom bite, they do not spread disease, they have medical uses, and they make good bait.  However, the idea of having our blood sucked does not go down well with us.  We despise things that do that–mosquitoes, black flies, or biting midges—and we cut them no slack.  Perhaps, we should, though, with leeches. After all, they do us little harm–much less than mosquitoes—and at least one of them, Macrobdella decora, looks terrific!

2 thoughts on ““I vant to suck your blood”: Encountering Leeches in Northern Michigan”