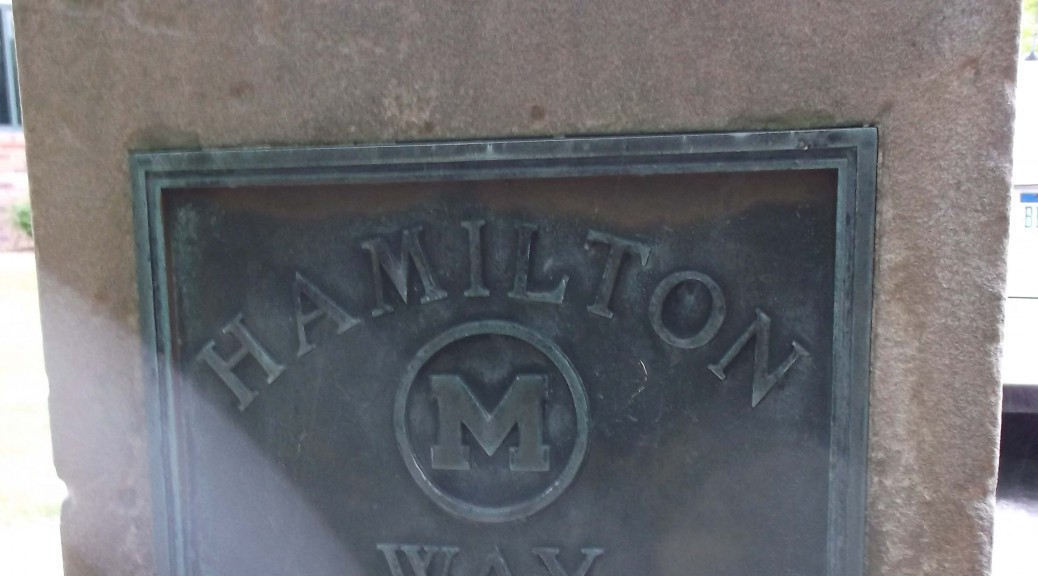 This monument located at Garfield Township Hall on Veterans Drive in Traverse City calls up a number of questions. Who was Hamilton? Why is his name associated with better roads? Why was it placed there? Any correct answers to the above questions will win you instant fame as a contributor to Grand Traverse Journal !

Thanks to Dr. Stacy Daniels, author of The Comedy of Crystal Lake, we have an answer for June’s Mystery Photo!:

“Frank W. Hamilton (b 24 Nov 1848, Waterboro, York,  Maine; d. 10 Sep 1940, Traverse City, Grand Traverse, MI) was Chairman of the Board of County Road Commissioners of Grand Traverse County so Hamilton Way was probably named after him.  Curiously the story at Find-a-Grave.com doesn’t mention roads among his many accomplishments, including being a partner in Hamilton & Milliken.  He appears to have been quite an esteemed citizen of TC – politician, businessman, bank director, and treasurer of the asylum.”

Good sleuthing, Stacy! Frank Hamilton was all the above, as well as being a leader in the “good roads” movement, which lead to the paving of many of the major thoroughfares in the region, especially the Circle Tour highway on the Leelanau Peninsula.

It’s 1910, and you’ve got the wagon hitched up, ready for a Sunday drive around Leelanau Peninsula… but there are no paved roads. Sometimes, you’re on a dusty, well- walked path, other times a bumpy two-track, and if you miss a turn, you’ll be in a farmer’s field. Bridges were scarce, and you might find yourself stuck on the wrong side of the river for miles. Not to mention, there are no shock absorbers on your old buckboard. Hamilton saw the value in creating a road system, to improve driving conditions for year-round citizens and visitors.

Dr. Daniels also found a number of digitized books that contain information, both on the “good roads” movement and Frank Hamilton himself. As you will read, his reach extended throughout all of Michigan, and wasn’t just limited to our neck of the woods. Here are a sample of those works for you to follow up on. As Dr. Daniels would say, “Happy Sauntering!”: