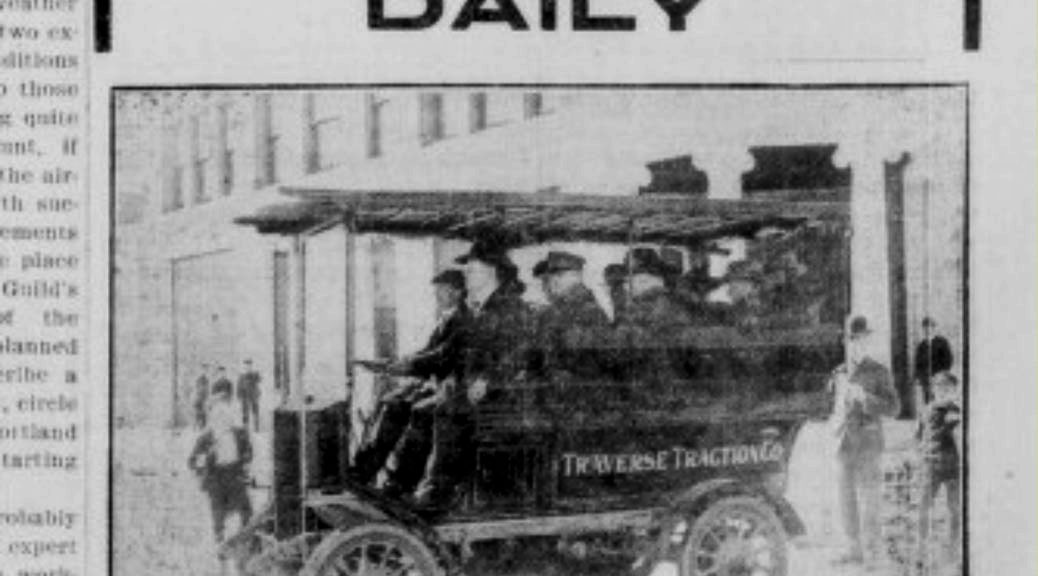 Starting in the mid-1890s, there had been much discussion among the residents of Traverse City about the necessity for a rail line running from Traverse City out Old Mission Peninsula. It was thought that transportation for people residing, resorting and farming on the 20-mile-long peninsula would benefit from such a service. Years passed without the plan ever becoming a reality.  Farmers, residents and resorters would continue to rely on carriages, wagons and livery services offered in Traverse City.

One last effort to raise funds for the electric railroad was attempted in 1907, but this dream (which had been debated for over a decade) eventually came to an end due to a lack of support. Early in 1905, however, entrepreneur Wm.H. Blake of Cheboygan, chose Traverse City for a new transportation enterprise that might finally resolve the Traverse City to Old Mission issue. The January 1905 edition of Automotive Industries  explained this emerging industry:

One of the greatest fields of usefulness for the commercial automobile undoubtedly will be in the interurban passenger and freight traffic between cities and villages that are not connected by steam or electric railroads. There has been for several years a constant and steadily growing demand for reliable and economical automobile stages and ‘busses for such work, and the effort to fill this want, together with the demand for gasoline delivery wagons and trucks, is just now furnishing the greatest development in the industry. Auto manufacturers were looking for ways to expand their sales of these  “mechanical traction” vehicles. [Mechanical traction was a term used at the time to describe a mode of  mechanized transportation rather than that using animal power.] The Olds Motor Works company advertised a Wagonette  designed for exactly the service Mr. Blake envisioned for Traverse City. He saw it as a town that could benefit from “the establishment of the new rival of the electric cars.”   After founding a successful bus service in the downstate town of Chelsea, Blake arranged to have the manager of the commercial department of  Olds Automobile company of Detroit,  come to Traverse City and offer his opinion as to the success of the proposed Traverse City and Peninsula Traction Company.  He found it to be a sound prospect.

With the financial backing of several prominent businessmen, The Traverse Traction Company was organized in June,1905. The company was funded with thirty thousand dollars in stock and subscriptions. Officers and directors were elected with Blake as president and general manager of the company.

The first vehicle arrived on May 30, coming in from Detroit on the steamer Missouri.  Over the next month, the fleet grew to eleven vehicles– three auto busses used in street car service in town, a second touring car and a twelve-passenger bus available to charter.  Two more busses were scheduled for twice daily service to Old Mission, and three heavy-duty vehicles for hauling freight. These freight wagons were equipped with twenty-four horse power engines, five-inch tires on thirty-six inch wheels and capable of running ten miles per hour. A Saginaw newspaper noted the usefulness of the freight wagons in an area famed for its orchards: “The freight cars will have a capacity of 500 fruit crates each way. As the peninsula is virtually an orchard  eighteen miles long, this will prove a great convenience to the farmers who heretofore have had to haul their produce to the docks.” Beyond the practical value of early trucks, the novelty of the touring cars became a favorite with locals just wanting to get out and take a ride.   The Traverse City Record Eagle took note of the joys of auto touring: The Traverse Traction company…received yesterday a twenty horse power Olds touring car… and will be open to charter by private parties. The car is one of the most handsome in the city and will undoubtedly prove popular with those who like auto riding but do not own a machine… many have taken advantage of it to take the beautiful rides along the bay shore.”

On June 29, a trial run of the Old Mission routes was tested out. The vehicles were loaded up with company stockholders and prospective stockholders as well a newspaper reporter, all eager to experience the bus ride. Indeed, it may have been the first ride in a motorized vehicle for many of them. The trip out and back took an average of two hours and twenty minutes. One car had mechanical problems and had to stop for nearly an hour to make repairs, a common occurrence with early automobiles. The twelve-passenger bus went on its test run the following day, presumably without difficulty.  The trial run had not gone perfectly, but results showed promise.

One issue that came to light during the trial run was the sorry condition of roads.  At the time, rural roads were maintained by the people who used and lived on them.  Pleadingly, the Traction Company asked local farmers to try to keep the roads near their farms in good condition.  For the most part, they were willing to do their part, though some demanded proof the company was serious about providing transportation service to friends, visitors, and family. Even with their compliance, washouts were common, and sand on the road and in soft areas could make it difficult to get through.

Daily Old Mission service began on July 10.  It was scheduled twice daily with fares .75 cents one way or $1.25 round trip. This service was to provide transportation for resorters as well as Peninsula locals wanting to go into town and back. The Traverse City Record Eagle was enthusiastic about the possibilities of success for the new company, “…the facilities for rapid transit which the project provides are certainly attractive, and when the regular street schedule is perfected the service will prove of great convenience and benefit. To the peninsula people the line will be of especial value, both as to convenience of passengers and to quick handling of fruits…in addition to the proposed street and freight service the arrangement is for charter parties to the various resorts is admirable and will be favored during the summer season.”

The Traction Company employed twelve drivers, two wipers, a stenographer, and a chief engineer, who maintained the vehicles. A facility to house and maintain the cars and busses was established in the Boughey building on the corner of State and Cass streets. Large double doors and an approach from the street were added in order to accommodate the busses into the building.  The facility not only serviced the busses, but also operated as a general auto repair shop.

Prominent citizens of Elk Rapids also showed an interest in the bus service and talked with company officials to see if Elk Rapids could be added as a stop on the route.  Everyone could see the advantages of road travel over the horse-and-buggy or even the infrequent trains.

The busses were used for just about any need one would have to get from one place to another: taking people from train depots to resorts on the Peninsula; conveying them to dances, the circus, or other entertainments; or providing a means for chartered group outings.  One car took two doctors from Elk Rapids to deliver a man to the Asylum. Even locals who had cottages at one of the East Bay resorts used the bus service regularly.  It was not only cheaper than keeping a horse, but more convenient.

Only one accident was reported during the summer of 1905. While on its East Bay route, one of the busses hit a tree.  The Record Eagle reported that its top caught some low hanging branches which drove the car into the tree. The top was wrecked, one front wheel sprung and the lights damaged, but no one was hurt.

The service was successful throughout the summer months, but as tourist season came to a close, the need for the busses dwindled.  Sadly, on September 23, 1905, this posting appeared in the Record-Eagle: “…owing to the decreased traffic, the Traverse Traction company will cease operating their busses tomorrow for the season. It is stated that the busses will be shipped soon to some southern city for the winter.”  The September issue of The Motor Way reported that the company was “pleased with the patronage received and the service will probably be repeated next summer.”  Mr. Blake told a Record-Eagle reporter that he liked Traverse City and had considered making it his home. However, the service must not have been profitable enough for the investors, as Mr. Blake stayed in Cheboygan and there is no evidence of the company still existing the following year.

Bus service in town was not dead, however. In October 1908, Morgan’s livery added an auto bus and a touring car to their fleet, providing service to Edgewood and East Bay resorts in the summer months and were available for hire as well. It took some time for riders to convert from horse-drawn transportation to automobiles. During the years the two modes overlapped, the noisy machines spooked horses, causing runaways and novice drivers sometimes didn’t realize the speed of their machines, resulting in accidents.

As years passed, the novelty of the “horseless carriage” wore off as automobiles became affordable for just about everyone.  As better roads made travel more predictable and less hazardous, autos forever changed how people traveled. Some tourists began bringing their own machines in on the ships they arrived on, or else braved the uncertain condition of roads and drove themselves up from major centers of population like Chicago or Grand Rapids. Locals too, eventually set aside the old ways and purchased vehicles. Over time, the demand for passenger ship and rail service diminished, finally disappearing altogether–thereby bringing to a close the era of big resorts and summer-long vacation stays in Northern Michigan.

Julie Schopieray is a local historian and writer. She is currently working on a project concerning Jens C. Petersen, a Traverse City architect who practiced in this city from the early 1900s to 1918.