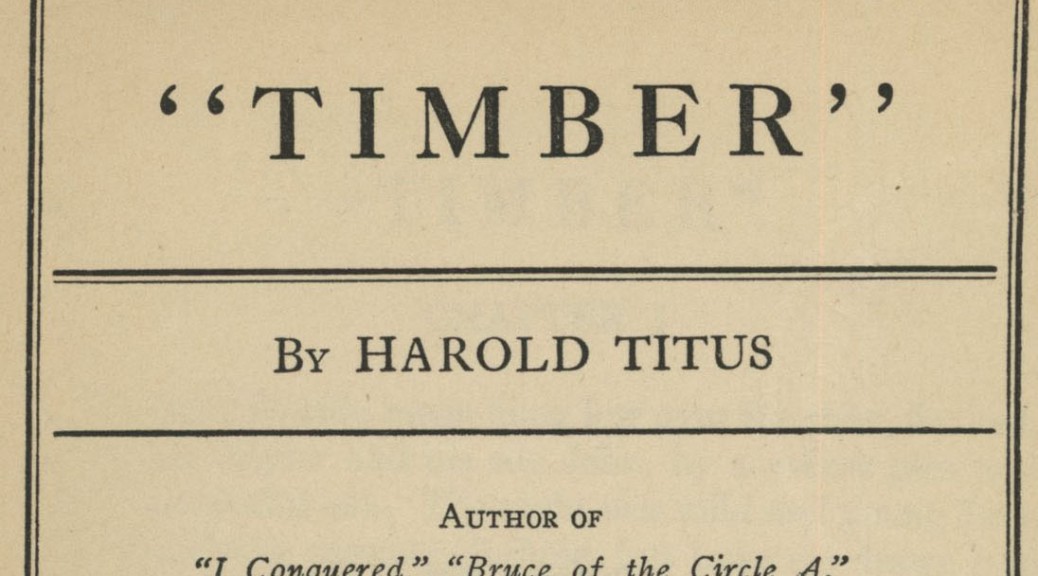 Harold Titus was a noted writer and conservationist, born in 1888, died in 1967.  He wrote more than a dozen novels, among them “Timber,’ a work that expressed his lifelong interest in conservation.  Titus was a founding member of the Izaak Walton League, established in the same year as the book appeared.  He is buried in Oakwood cemetery in Traverse City.

In the following excerpt Helen Foraker, a character who speaks out for scientific management of forests, expresses her view (and Titus’s) of the importance of woodlands and the tragedy of their destruction.

“Less than fifty years ago this land was stripped of its pine; today it is maturing another crop.  The same could have been done with any other piece that grew good trees: Just keep the fire out and nature would have done much in time.  Fire, fire, fire, without end!  Every summer it eats across the plains country; every summer it does its damage on cutover lands in all the timber States.   It not only destroys trees, but it takes the seed bearers and the seeds that lie ready to sprout and the life of the soil itself. “To exist as a nation, we must have forests; to have forests all we need to do for a beginning is to give this worthless land a chance.  We can speed up its work by helping—by keeping out fire, by planting trees by good forest practice.  Can’t you see all these Michigan plains growing pine again?  And in Wisconsin and Minnesota, Pennsylvania and New England, the South, and everywhere where hills and valleys have become blackened eyesores?  Don’t you see what it would mean to people, not only in cheaper homes and steel and railroads, but something else?  Fish and game and a chance to play as men were intended to play!  It is so simple to do; to show people that it is simple is such a task!”p. 125,6

“In the woods when a saw gang has cut into a tree until it commences to sag and snap they stand back and cry ‘Timber!’  It is the warning cry of the woods; it means that trees are coming down, that men within range should stand clear.  My father used to say that the cry of ‘Timber!’ was ringing in the country’s ears, that the loggers had given the warning, that the last of our trees were commencing to fall—but we haven’t heard!  Our ears are shut to the cry, our backs are turned and unless we look sharp we’ll be caught!” p.128

Excerpts taken from the 2nd printing of Timber. Copies of Timber are available for circulation through Traverse Area District Library. The book is also available free online through Hathi Digital Trust.