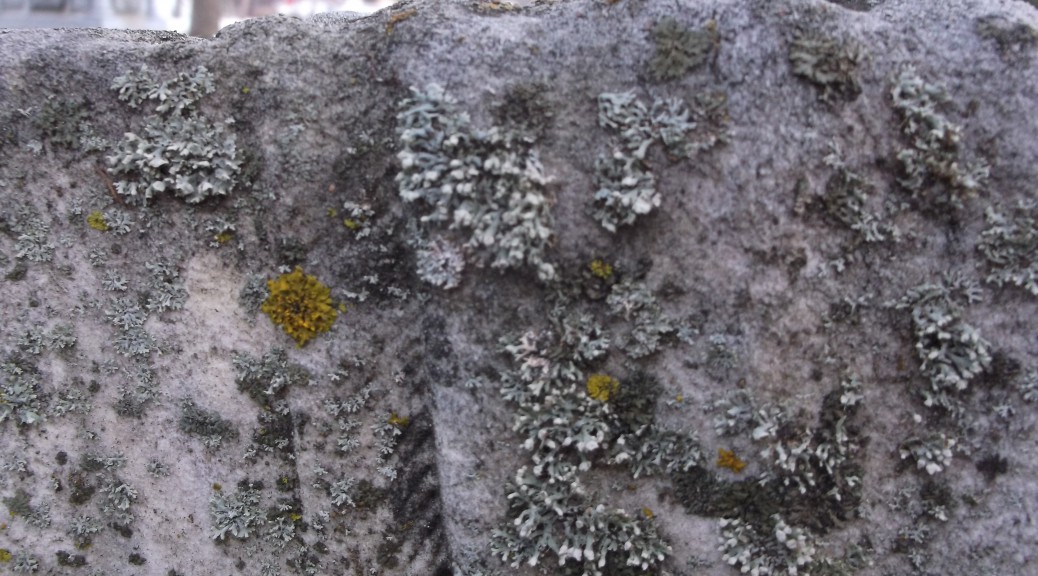 O broken life! O wretched bits of being,
Unrhythmic, patched, the even and the odd!
But Bradda still has lichens worth the seeing,
And thunder in her caves—thank God! Thank God!
– Thomas Edward Brown, quoted in Lichens of North America, p. 3

More than 24,000 souls are buried in Oakwood Cemetery on Eighth Street.  Their monuments fill sixty acres all told, the earliest ones dating from the 1860s.  They are made of limestone, granite, and even zinc, the last material only used for a few persons buried between 1885 and 1890.  Draped urns, lambs, weeping willows, angels, passages of Scripture—even baby shoes—are carved on them, symbols of grief and the hope of life to come.  Besides these human expressions of emotion are marks Nature herself bestows upon the stone as a reminder of continual change: lichens.

Lichens are informally called “moss” by most people, but are different from that organism.  Mosses have leaves and stems, for one thing, and lichens do not.  A moss is a single organism, every cell with moss DNA, while a lichen is like a chimera (an animal made up of two different kinds—like a centaur).  Its body is made of a fungus which has captured a colored food-making element, an alga or a kind of bacteria. Often forming a crust or spreading as a leaf-like thallus over a stone monument, many of them are stunning, especially when examined under a ten-power lens.

We think of organisms only when they impact our lives and, in this regard, lichens are no different from other living things.  What good are they?  What harm do they do?  What is their role in nature?  These questions tug at us even as we admire their beauty.

We can’t eat them, though a few cultures—like the Inuit–manage to extract scant nourishment in extreme habitats like the arctic.  They colonize our statues and monuments, their slender filaments penetrating even hard granite to a few millimeters and softer limestone to a depth of 16 millimeters (more than a half inch).  Lichens are colonizers: they move onto unfriendly substrates like tree bark, barren soil, or rock, creating patches of organic matter which are taken over by more complex plants like mosses and ferns.  They are pioneers.

Lichens are not friends to sextons of cemeteries.  Degrading statuary and carvings, they make inscriptions hard to read, obscuring names and dates.  Only the scattered zinc monuments are free of the problem, that surface providing scant toeholds for colonization.  Inscriptions on the oldest stones are scarcely legible, so encrusted with green and orange lichen growth that observers vainly scratch them away to capture the names and dates of persons long forgotten.

Yet we should not despise lichens, for they charm us with their intricate structure.  Under the lens, some of them present an array of disks aimed upward, not to catch something from above but to give something off: spores.  Called apothecia, these miniature dishes produce millions of fungal spores which enter the streams of the wind.  Upon landing in a fertile place, they send out tiny threads and wait for the landing of the right bacteria or algae, photosynthetic cells responsible for growth.

Slowly the colonies grow, and we should be glad, since lichens only thrive wherever the air is pure and clean.  It is well known that tree trunks downwind from polluting industries are bare of lichens.  When our tree trunks are bare of them in Northern Michigan, when gravestones stand without those round patches of sage green, orange, and yellow, then we will know that the air has gone bad.  We should take joy in the lichens around us.

Books of most interest to readers are Michigan Lichens by local author Julie Medlin and the ponderous Lichens of North America by Irwin M. Brodo, Sylvia Duran Sharnoff, and Stephen Sharnoff.  Both of them may be found in the Traverse Area District Library.

2 thoughts on “Lichens: A Broken Piece of Life, Wretched bits of being”