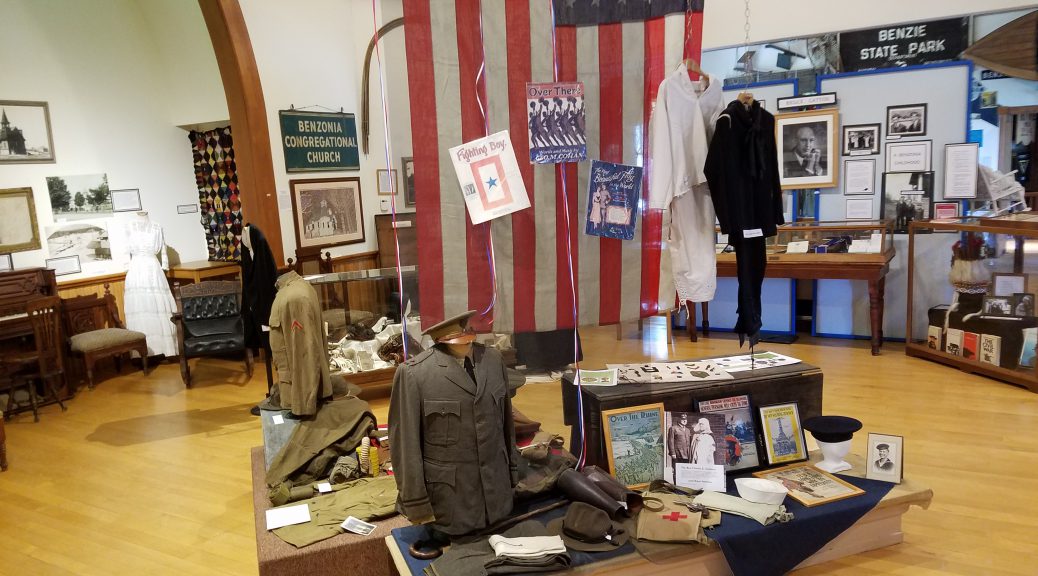 by Andrew Bolander, Benzie Area Historian, Museum Volunteer
The experiences of the American North Russia Expeditionary Force during World War I are often overlooked. The units arrived in Archangel, Russia on September 5, 1918. From its inauspicious start, in which 175 soldiers were unable to disembark their troop transports as they were quarantined with the Spanish Flu, to its cold, bitter end, the Expedition was largely seen as a waste of manpower.(1)

Why the Americans were involved in the North Russian theater of operations was a convoluted diplomatic mess.  Their military purpose was to maintain an Allied presence on the Eastern front of the European conflict. After the Bolshevik Revolution (November 7, 1917), the Allies were weakened by the loss of Tsarist Russia. The Bolsheviks signed the Treaty of Brest-Litovsk with Germany in March 1918,  and the line of battle on Germany’s eastern border disappeared. So the American North Russia Expeditionary Force appeared in Archangel, Russia, to keep the Bolsheviks south and the Germans out of Murmansk. This adventure later became commonly known as the Polar Bear Expedition.

Although the Americans were specified not to be an offensive force, on September 6th the British command ordered a push south along the Trans-Siberian Railroad to Vologda. It was hailed as a victory, but it had created a front of 450 miles in length that the Allied forces struggled to defend for the next nine months. The Americans, who comprised the majority of the boots on the ground covering the area outside of the city of Archangel, numbered 5500 men. In comparison, the front between France and Germany was roughly 500 miles long with millions of soldiers trenched in on either side.

The notorious Russian Winter battled the American troops. President Wilson determined that the American soldiers in Russia would not be equipped with standard Army kit. No American flags were to be officially brought to Archangel and the soldiers did not wear the uniform of the United States Army.  Cold weather gear provided by the British Army was criminally inadequate. Soldiers bartered for improvements in the markets or looted the dead for fur lined hats, gloves, boots, and coats, which were suitable for the environment they were commanded to occupy.

Gilbert T. Shilson was a Lieutenant in Company “K” of the 339th Infantry, and despite this small sample of the trials he and his companions experienced he would willingly return to the same frozen countryside a decade later. Mr. Shilson, who was widely known as “Duke”, grew up in Traverse City and lived there until he joined the Army for World War I. His parents ran the Hotel Shilson that was on the corner of Lake Avenue and Union Street. The Boardman River House was opened by his grandparents and his grandfather, William Shilson, was the first miller in Traverse City. Duke was employed at the Record-Eagle as a reporter and Sporting Editor and later left Traverse City to work at the Detroit News.
Mr. Shilson was recognized by the French Government for his courage during the battle of Kodish, which took place at the end of December 1918:
“Fine Conduct during the battle of Kodish on December 30th & 31st, 1918. Facing an enemy ten times superior in number and under violent fire, he constantly maintained the spirit of his men. Being constantly at the most dangerous places of the fight, he succeeded, after a battle of fifteen hours, in repulsing the enemy. There were five men killed among which were one officer and twenty-nine wounded, out of a total number of sixty-five men.”

In 1929, Michigan Governor Fred W. Green appointed a commission to locate and retrieve fallen American soldiers that remained in Russia when the troops were withdrawn. Shilson was appointed as its chairman. By July 1929 enough research and fundraising had been accomplished to send a team over to Russia and retrieve the fallen American soldiers. The Polar Bear Association dedicated the Polar Bear Monument on Memorial Day 1930.  Fifty-five bodies from Russian soil were interred at White Chapel Memorial Park in Troy, Michigan.

The Benzie Area Historical Museum will conduct a cemetery tour Tuesday, July 11th from 7 to 8 pm and will hold a remembrance ceremony at Mr. Walter Dundon’s grave. Currently the museum is maintaining a display on the Polar Bears as part of the World War I exhibit that will be open for the duration of this summer.
References:
(1) Harding, Warren G. (President) quoted in “American soldiers faced Red Army on Russian soil,” Army Times, September 16, 2002.