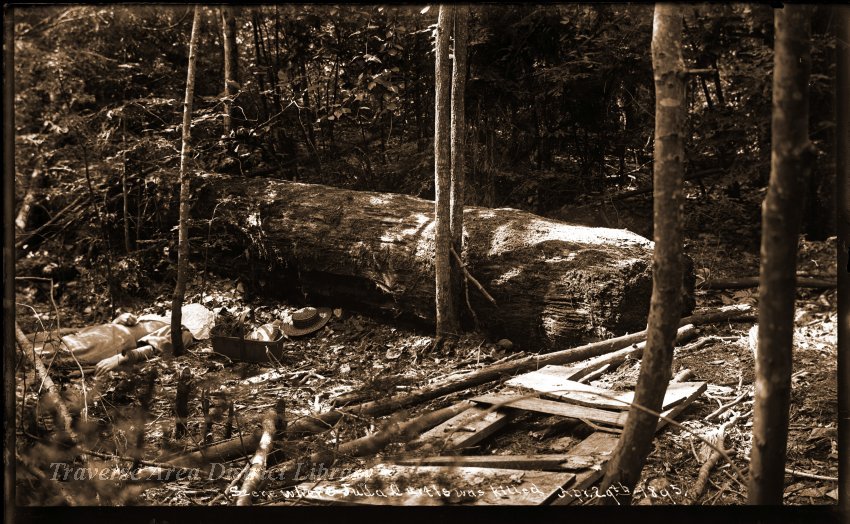 In 1895, Woodruff Parmelee, the son of a prominent Old Mission Peninsula fruit farmer, was convicted of murdering Julia Curtis, his pregnant mistress. His son supported his alibi that he was clearing a new road toward West Bay while Julia’s body was found in the hemlock swamp across from East Bay. Yet Parmelee was still convicted and sentenced to life in prison at Jackson State Penitentiary.  Parmelee was in his 40s, twice Julia’s age, already twice married and recently divorced from his second wife. His checkered history no doubt influenced the jury that convicted him. That story forms the basis of Murder on Old Mission by Stephen Lewis, an Old Mission resident who is re-issuing the novel in January through Mission Point Press. (Originally covered in the December 2015 issue of Grand Traverse Journal).

Lewis is simultaneously publishing a follow-up novel, Murder Undone, in which he reveals this startling fact: In spite of the sensational nature of the crime, Parmelee was released from prison in 1915 after the direct intervention of then Governor Woodbridge Ferris (after whom the state university is named).   Although no new evidence had emerged to determine exactly how Julia died, this sequel provides a fictional answer to the puzzling intervention of the governor 20 years after Parmelee’s conviction. Murder Undone tells this story largely from the perspective of the same son who testified at the trial. Lewis also writes a dramatic parallel plot line of the copper mining strike culminating in the Italian Hall Tragedy in 1913, when 70 people, mostly children, were trampled to death in the panic caused by a false cry of fire at a Christmas party for the striking miners.  The governor was involved in both the strike and Parmelee’s pardon, his oversight tying the two plot actions together.

Both books, a reissue of Murder On Old Mission and the publication of Murder Undone, are coming out in January through Mission Point Press. The books are available locally and online at Amazon.com.

Born and raised in Brooklyn and Professor of English Emeritus at Suffolk County Community College on Long Island, New York, Stephen Lewis now lives on Old Mission Peninsula not far from a local, private cemetery where the Parmelees, except for Woodruff, are buried.  He is married to award-winning short story writer Carolyn Johnson Lewis, whose father, local historian Walter Johnson, first introduced him to the Parmelee/Curtis case.  Lewis’s previous novels were historical mysteries, so this case was a natural fit for him.   He can be reached at 231-631-4727 or stevelew@charter.net.