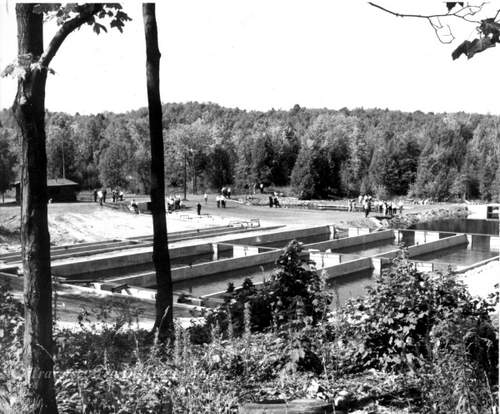 by Stewart A. McFerran  GTJ Contributor

September 2017: The Aisling (the author’s own boat, whose reintroduction to the water after a long absence was detailed in a previous article) approached the Manistee light from the deep water of Lake Michigan under sail. We encountered the sports fishing fleet trolling the waters for some of the 25,470,199  fish that were raised in DNR fish farms and released into the rivers and open waters around the State. The inner harbor was busy with large boats hauling complex arrays of bait. The Aisling, with a weight of over two tons pushed by the wind, was dogged by fishers with powerful engines, diesel and gas. No expense was spared to transport clients from the Manistee dock to fishing grounds miles out in Lake Michigan.

Once at dock in the Manistee River we learned a fishing tournament was taking place on the big lake. The fishing was not good and the sporting men were grumpy but still purchasing rivers of fuel. Many of the crews were catching nothing. The fish that were caught were small. But the trophies were large. They were chasing the non-native, farm raised creatures released into the open water. I wonder if this scheme is sustainable?

Fish farming is practiced by the State of Michigan in service of the sports fishing industry. The ecological changes in the big lakes have put that industry on shaky ground. If big fish are not displayed and celebrated at tournaments one has to wonder what the future holds for the sports fishing fleet.

Fish farming by the commercial fish farmer is sustainable.  I have been in contact with Dan Vogler of Harietta Hills Trout Farm about fishery management and asked his professional opinion on matter fishery practices in Michigan. During our conversation, as you will see, we often came back to the conundrum, ‘What is native, what are we protecting’.

D.V. That’s an interesting read (referring to a previous article published in Grand Traverse Journal). Fishery management is certainly not something that draws unanimous consent in most proceedings.

S.A.M.  The DNR has the funds and is pushing forward with the Fish Pass project on the Boardman River. But just what fish are going to pass?   Northern Michigan Environmental Action Council, The Grand Traverse Band of Ottawa and Chippewa Indians and the Adams Chapter of Trout Unlimited, feel that the “Fish Pass” is a dubious proposition.

D.V. In my opinion, having open river systems with 100% passage would be great…if we were still dealing with native systems…but we aren’t.  We now have fish in the Great Lakes that will exploit passage to the detriment of many species upstream.  Sometimes “natural” isn’t as natural as it might first appear.

S.A.M. Yes. Bill Scharf (Professor Emeritus at Northwestern Michigan College; Professor of Biology at Lake Superior State University) shared an article with me that documents how the lake-run trout (steelhead) can contaminate the upper reaches of streams that have been isolated for many years and effect areas managed as separate units. I will send you that link . . . (Notre Dame University; Janetski et al. 2012)

D.V. Imagine also runs of Pacific salmon and Steelhead up the Boardman….some folks would be enthusiastic, but probably not good for our native species.

D.V. Not only that, but much higher predation rates by huge lake run piscivores!

D.V.  So, not all desirable natives are trout….although I have to admit that these come to mind first….and Brookies are arguably in that category.

S.A.M.  Maybe it is cynical, but if you accept that there are no native species of fish left (except for Coregonids) you can say: Why not have commercial aquaculture?

D.V. The reality is that we already have large-scale aquaculture in the Lakes.  State hatcheries propagate and stock huge number of non-native fish that are essentially “ranched” on the “open range” of the Lakes, then “rounded up” by a fleet of fish cowboys.  Why not have aquaculture that can feed lots of people?

D.V. Imagine a Fish Town in Leland that actually featured locally grown whitefish, and that it could actually support itself as a commercial enterprise again.  It is possible.

S.A.M. I know Bill Carlson (commercial fisherman and owner of Carlson Fisheries in Leland) wanted that.

D.V. Unfortunately, only fish heretics talk about this type of thing nowadays…..The mythology that has been developed to discount aquaculture has the mainstream and most of the fish community running scared.

S.A.M. I would like to see a study comparing the pollution from a dock with motor boats to a small aquaculture operation.

D.V. So the studies on the aquaculture side have all been done up in Canada in the Georgian Bay and the Experimental Lakes region….Real science…peer-reviewed science.  As for studies on marinas…I’m quite certain that they can’t possibly have any negative environmental impacts…otherwise everyone would be up in arms to make sure that they were banned.

Northern Michigan Environmental Action Council, in a resolution recently stated: “If a chosen fish is a species currently raised in a hatchery, then passage up the Boardman River is tantamount to aiding and abetting aquaculture.”

There is a long history of aquaculture in all the Great Lakes States. It is not a crime. As we approach the “paradigm shift” that many fisheries biologists refer to we need to consider ending the State-run monopoly on fish farming. Decriminalizing private aquaculture operations is the least that can be done.

(BTW, an epic quest for Moby Dick does not have to be a part of every boat ride on the big lake. A sailboat ride is much more sustainable.)