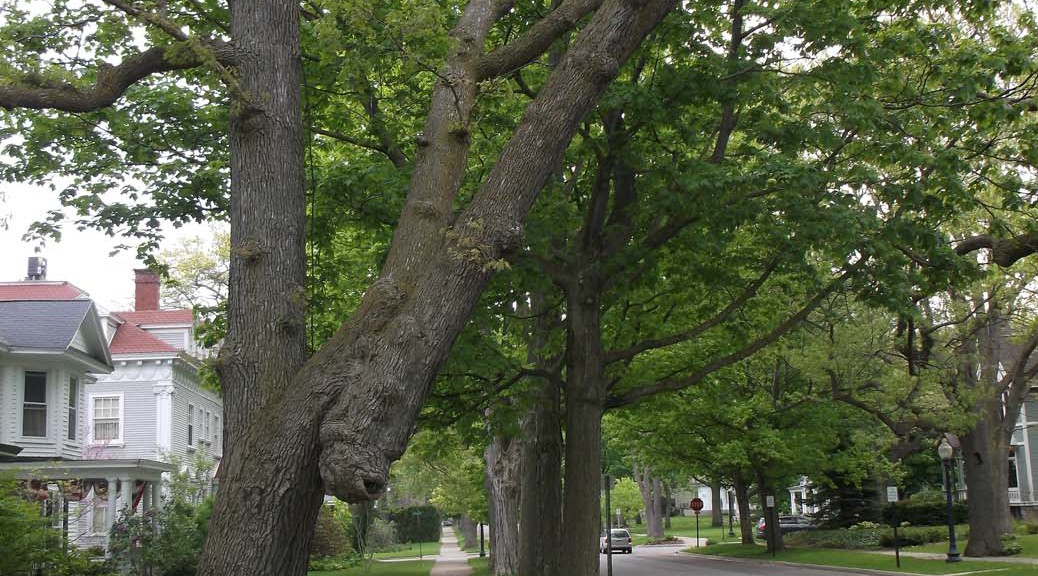 The Forest That Is Traverse City

In summer, preparing to land in Traverse City, it is hard to see the houses below through the airplane window.  A vast forest spreads out there, obscuring houses and streets alike.  It is a forest of a sort, yet it resembles no forest growing wild nearby.   Local forests do not have sycamores, tulip trees, Japanese lilac, Norway maples, and Gingko.   Nor do they have Colorado Blue Spruce and Norway Spruce.  All of those trees are exotics, having been planted by individuals or by the City Parks Department to provide shade as well as grace and beauty to the city landscape.  They are native to other lands, some as close as Southern Michigan and others as distant as Tibet.  Whatever their lineage, they have found homes along the streets of Traverse City.

Before there was Traverse City, there was forest.  Most of the city was built upon level, gravelly lake bottom, its sand still visible whenever sewer projects require excavation.  The great White Pines grew there, along with a scattering of Red Pine and White and Red Oaks, a mixture still in evidence on the Northern Michigan College campus.  The pines were the first to be taken by the Hannah Lay Logging Company, while the oaks were generally left alone.  Some of them remain today in the back yards along the streets of both the east and the west sides of town.  Oakwood Cemetery is home to many.

The far west side of town provided different habitats for trees.  Along Kids Creek, from Meijer’s to the Boardman River, a vast swamp covered the land.  Street names like “Spruce” and “Cedar” were named after the trees that grew nearby.  Early in the city’s history, the Creek was dammed to make a mill pond at a location near the Kids Creek viaduct under Division Street.  Valued by young potters even now, the clayey soil of the area still can be seen along the stream banks.

Finally, ascending the hills that border the west side of town from the Commons to Hickory Hills, the forest changes again.  Giant beech trees inhabit this area, some admirably cared for by homeowners who apparently do not mind the beechnuts, hollow trunks, and occasional breaking of dying branches under winter snow.  Hard maples–sugar maples–grow along with them, the two species forming most of the canopy of a beech-maple forest.  Soils here are richer than those of the city’s flatlands: Glaciers deposited more clay, enabling higher soil moisture and faster growth during dry summers.  The large trees of Ashton Park near Willow Hill School are examples of the virgin hardwoods that occupied this forest of glacial moraines.  Repetitions of these beech-maple forests can be seen throughout the hilly regions of the Grand Traverse area.

Most trees growing along streets are not relics of the primeval forest that city founder Perry Hannah knew.  They have been planted by the City and by townspeople in an effort to make the barren landscape more hospitable to early residents.  Early photographs show an empty landscape from the Bay to the hills surrounding the city.  The sun burned hot in summer and a heavy rain would send streams out of their banks without the trees to hold back run-off.  It was only natural people would try to restore what loggers had taken from them.

Centered in large cities like Chicago, the City Beautiful Movement began in the early twentieth century as a response to industrial pollution and environmental neglect.  It promoted the segregation of railroads and factories from residential spaces, city parks, sidewalks, and the planting of trees along broad, paved streets.  Influenced by the movement, Traverse City set about making its streets beautiful.  It laid out Hannah Park at the present location of the Carnegie library (now, the History Center) on Sixth Street and began planting trees, sugar maples by the hundreds.  Early photographs of the library show rows of thin saplings bordering the street.  Most have disappeared to be replaced by other—perhaps more fashionable—trees.

According to Rob Britten, City Parks and Recreation supervisor, the city chooses its trees carefully, attempting to harmonize diversity with resistance to the abuses of city living, all the time paying attention to rate of growth, sturdiness, and the attraction of flowers, fruit, and colorful leaves in autumn.  It is not an easy job.

No longer emphasizing sugar maples, the City plants a wide variety of species: Japanese silk trees, Ginkgos, Hackberry, Autumn Blaze (a cross between sugar and red maples)—even Chinese pears, downtown and elsewhere.  The harmful consequence of depending too heavily on one tree species is visible in the demise of ash trees through the depredation of the Emerald Ash Borer.  Healthy ashes along city streets are doomed to an early death due to the insect.

Even without attacks by insects, life is hard for trees in the City.  First, there is the broiling sun in summer.  On sunny days black asphalt heats the air above it, raising temperatures far higher than those experienced by nearby trees in the forest.  Winter salt dehydrates roots, conifer needles, and buds.  Add to that the confinement of roots by paved surfaces and it is a wonder they survive at all.  But they do and we are grateful.

Trees enrich our lives in so many ways.  They cast shade and cool our houses.  They turn colors in autumn, bringing us joy even as we contemplate the return of winter.  They make fruit of many kinds, enjoyed by animals that normally spend their lives in wilderness.  They provide homes for birds, squirrels, and other mammals, thereby giving us a glimpse into their lives.  Most important of all, they connect us city dwellers to the rhythms, textures, and beauty of Nature, a perspective that comes easy to the farmer but not to us.  Leaves and twigs, roots in sewer pipes, pollen in spring, a downed tree in a wind storm—it is all worth it.  Imagine the barrenness if they were not there.