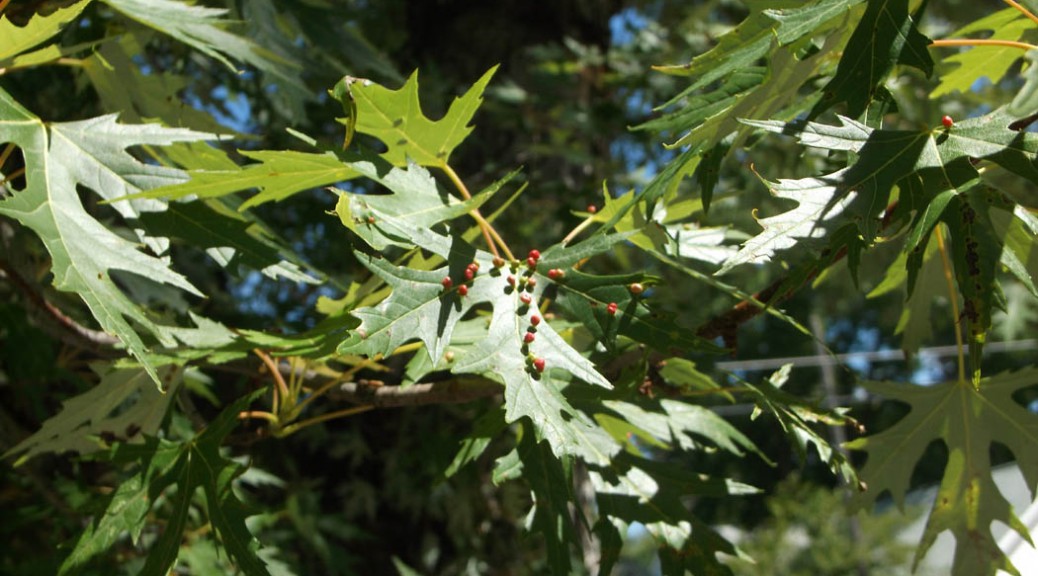 In early summer you may have noticed small pouches on red and silver maple leaves.  If you open one up, you will find—nothing at all.  Or so it seems.  In fact, the creatures that live there are swarming all around.

They are microscopic mites of the eriophyid family, so small you would need a 400X magnification to study them in detail.  Unlike most mites, they have but four legs—not eight—with two pairs clustered around the animal’s mouth.  Dwelling within such a small space, eriophyids hardly have need of legs at all: for most of their lives their universe is no bigger than the gall they inhabit.

The life cycle of the mite is simple.  They mate and reproduce within the secure enclosure of the gall, producing several generations within a summer.  Before leaves change color in autumn, obeying a signal we do not know, they migrate out of their chamber to the bud scales of next year’s leaves or to protected areas under loose bark.  Dormant, they wait there for the cold blast of winter.

In spring, before leaves expand, they enter young leaves on the underside, their presence initiating the balloon-growth of many pouches, the number ranging from a half dozen or so to an ugly multitude that deforms the leaf.  While the mites undoubtedly sap energy from trees, they cause little permanent damage.  Gardeners and foresters generally ignore their presence, not wasting effort or chemicals to discourage them.

I think leaves adorned with crimson maple bladder galls are attractive, resembling miniature Christmas decorations in the month farthest removed from that holiday.  They can be pointed or inflated depending upon the species of mite involved and colors vary, frequently starting off green and becoming red before fading to a dull brown.  Can they be thought of as a rash trees get?  Not exactly, since they do infect the surface tissues alone, unlike human dermatitis.

Another kind of eriophyid attacks plants in a different way.  Instead of making galls, it secretes a chemical that induces plants to grow a forest of slender hairs called an erineum.  An erineum—taken from the Greek word for fleece—can be found on the lower surface of leaves of many plants: oaks, maples, viburnum, and grapes are especially affected.  It may appear as a velvet fuzz, white or commonly red in color.

As with the gall-forming eriophyids, the erineum mites are exceedingly difficult to see even with a powerful magnifier.  A twenty-power lens might reveal their presence, though sharp eyes will be called for.  A microscope, of course, would work better.

Somehow I connect these animals with larger herbivores like bison..  I imagine them roaming over the fields of hairs they caused to grow, feeding upon them as the bison would, a prairie in a square inch.   Throughout early summer they graze, finally retiring to bud scales and bark for the winter.  Occasionally a stiff wind will blow them right out of the erineum, something bison do not have to worry about.  Of course, the advantage for the mite is that it might get blown to a new tree, fertile ground to establish a new miniature prairie ecosystem.

Nature performs its work at every scale: planet, ecosystem, organism, organs, tissues, and cells.  Isaac Asimov, the famous science fiction writer, once wrote about exploring the world extending from his backdoor.  After much study he had gotten as far as a few feet from his porch, so numerous were the species he encountered.  Most likely he did not get around to the mite-formed galls or erineums on his shade trees.