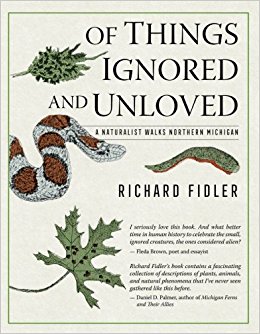 Of Things Ignored and Unloved: A Naturalist Walks Northern Michigan contains over thirty essays by the esteemed Dr. Richard Fidler. (Before you ask, no, he is not standing near me engaging in threatening gestures as I write this review. It is a totally unsolicited piece, however, the quality of this collection should be commended on the highest mountaintops and lowest freshwater sponge-riddle waterways. For real.)

Long time readers of Grand Traverse Journal will recognize parts of some of the essays, as many of Fidlers’ first iterations of these essays were published in this very magazine, a very distinguished honor to be sure! He covers nearly everything we regular, un-inquisitive folk visually pass right over, from ant nuptials to Trailing Arbutus. He includes the misunderstood milk snake, the repulsive sea lamprey, and the confusing clubmoss, giving each organism he sets his sights on the respect they are due. What are these things, and what, if anything, do they do? You will find these answers and more in this collection.

This is a truly unique collection, one I have not seen the like of before. Often, descriptions of the flora and fauna that are not well-loved (seal pups and baby orangutans, for example) are limited to brief, uninteresting, and ultimately uninformative encyclopedic clap-trap. Take, for example, this description of freshwater sponges from Britannica:

“Freshwater sponge, any of about 20 species of the genus Spongilla (class Demospongiae, siliceous sponges), a common, widely occurring group. Spongilla species are found in clean lake waters and slow streams. Freshwater sponges are delicate in structure, growing as encrusting or branching masses. They usually appear greenish because of the algae that live on them.”

Boooooorrrrringgggg. Also, nothing about what really interests me, which is primarily, what would this thing be like to squish between my fingers, and where can I see one in northern Michigan? Fidler answers both questions in his essay Godzilla vs. Spongilla: A Contrast in Lifestyles.

Perhaps you are interested in all things unique to our region? Fidler covers local phenomenon including ventifact fields and lag gravel, seiches specifically in Grand Traverse Bay, how the windstorm of 2015 affected local forests a year later, and other similar curiosities.

Truly, one of my favorite additions to these essays is Fidler’s hand drawn illustrations. Unlike in Grand Traverse Journal, which I typically illustrate on his behalf by using just okay, public domain images, you will get to see these organisms through the artistic pen of a man who cares. My favorite? The image of the water bear, which you can see in the essay At Play With Water Bears. I’ve never thought of Tardigrades as adorable before, but I certainly do now!

“But Amy, I’m not excited by nature, what does this collection have for me?” If you are one of these people (and I’m not accusing you if you are), I dare say you have not looked at the world around you with Richard Fidler. His writing is informative, engaging, quick, and light. If you believe you have no interest in its content, I challenge you to pick up a copy, flip to any random page, and not be fascinated by some tidbit you had never considered before. This would be a fun book to read with a younger person who is just getting interested in the creepy-crawlies whom we share the world with. Impress your friends, astound your enemies, and open your eyes to the natural world of Northern Michigan with Fidler as your guide!

Of Things Ignored and Unloved: A Naturalist Walks Northern Michigan is on sale at Horizon Books, 243 E. Front Street, Traverse City; and online at Amazon.com. 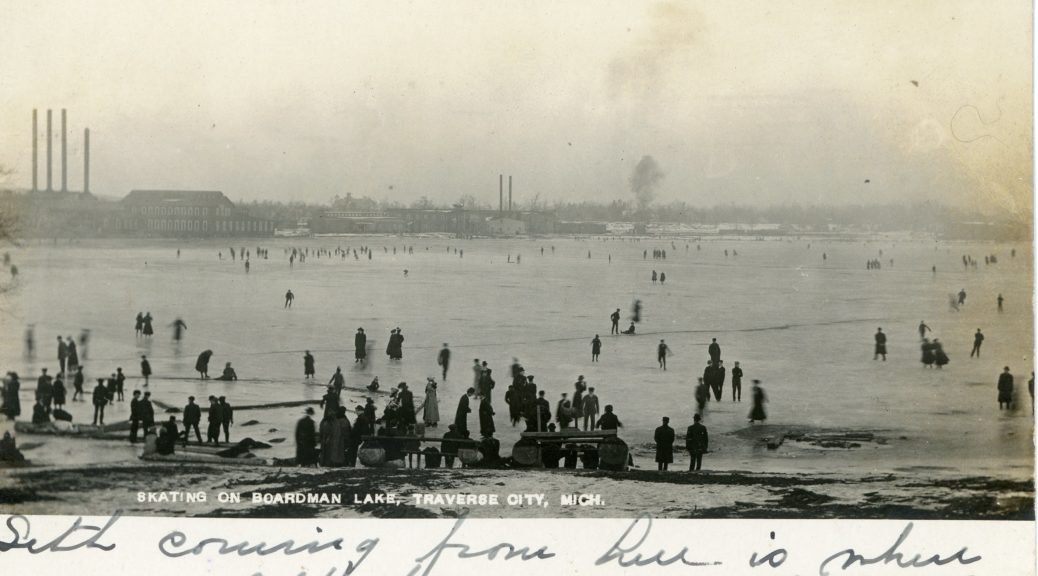 To date, January 2018s mystery photo has created the longest debate in the history of our publication! Thank you for being engaged and keeping your editors on their toes!

This image is easily one of your editors’ favorites! Taken about 1910, here is Boardman Lake, taken from the northern end and looking south. In the photograph, we see a number of fun-loving Traverse City residents ice skating, playing hockey, and in general enjoying a perfect frozen lake with no piles of snow to contend with. Solve the mystery of this image: What is that large factory shown on the background on the left? Bonus question: What building now sits where that factory was?

Congratulations to reader Biff Martin, who successfully identified the factory on the far left (with the three tallest stacks) as the Oval Wood Dish Company!

The bonus question raised some debate, but Mark Roberts answered successfully: the Boardman Lake Apartments is the former site of the Oval Wood Dish Factory.

Between the Factory and it’s famous family owner-operators, the Hull family, there’s a real story to be told! Maybe you would be interested in researching and writing that history? Let us know! 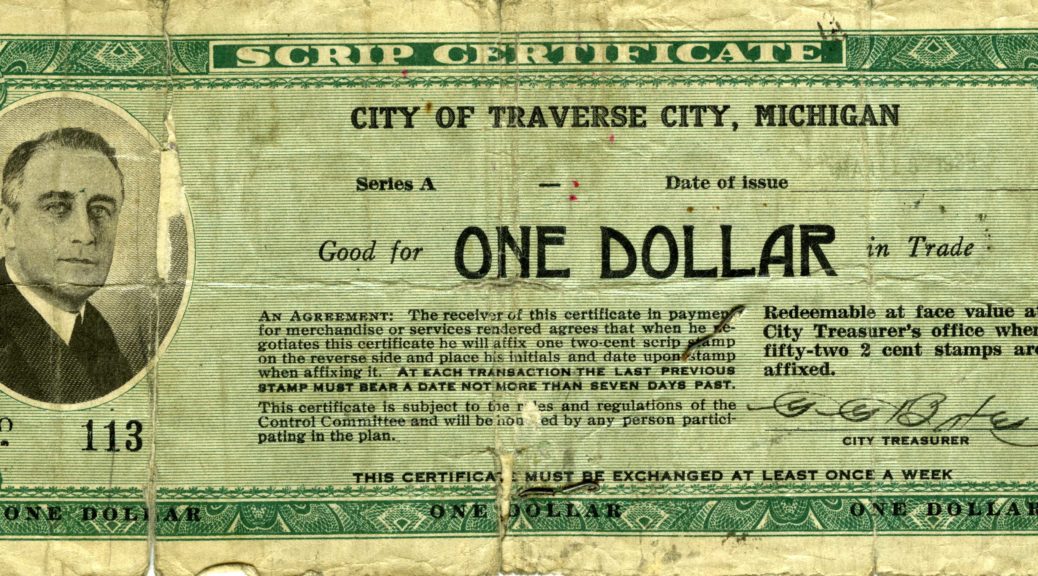 For this month’s Mystery Photo, we show you two sides of scrip, a currency Traverse City city leaders issued in 1934, the height of the Great Depression.  This money could be redeemed at many Traverse City businesses in exchange for goods.  At one point teachers were paid in scrip since there was no other money available to them.  The question is—why is the back filled with stamps?  What goal did that accomplish?  Good luck, history buffs! 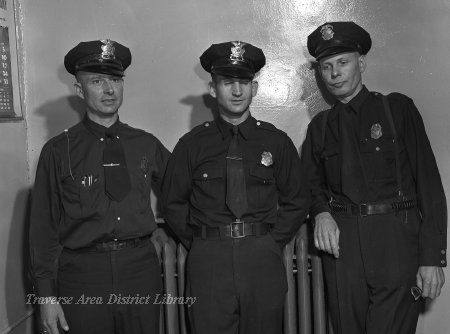 More bits of news from the Traverse City Record-Eagle, January 1968

Police Chief Howard V. Ritter dies at 54.  Chief Ritter was born July 19, 1913 at Rapid City, and moved to Indiana with his parents where he attended school. He then moved to Traverse City in 1930 where he graduated  from Senior High School.  After graduating from County Normal School in 1933, he taught school for a number of years in Kingsley.  In  1942 he joined the Traverse City police department as a patrolman, and was appointed chief in 1966.  Mr. Ritter was and active member of First Nazarene Church, serving as chairman of the board of trustees, as treasurer, and as a member of the building committee.  He was also a member of the local chapter of Youth For Christ, was a past president, secretary, and treasurer of the Fraternal Order of Police, served on the local Boy Scout board of review, and was a Boy Scout leader.  Capt. John McCloskey is expected to be certified as the new chief of police.

Romney visits India.  Republican presidential hopeful George Romney discussed food production and birth control with Indian governmental officials.  He was told that although India was sympathetic with America’s cause in Vietnam, they were unable to lend active support as a matter of survival.

Home for the Holidays.  Misses Brenda and Joann Duff, daughters of Mr. and Mrs. Keith Duff of Buckley, are visiting their family for the holidays.  Brenda (Biederman) has just returned from a trip to South America, and will work in San Francisco, California after the holidays.  Joann will return to New York City where she is employed by the United Nations.

Miss Hildah Cummings, 69, of 422 Washington Street, Traverse City, was pronounced dead on arrival at Munson Medical Center Saturday after an apparent heart attack at her home.  Miss Cummings was born September 30, 1898, at Lake Ann, the daughter of Henry and Ada Cummings, a pioneer family in the Grand Traverse region.  Miss Cummings later lived in New York and Detroit, retiring from the YWCA organization in 1965 and moving to Traverse City to make her home.  She will be interred in Grand Traverse Memorial Gardens.

At WTCM Station:  Traverse City Chapter of Sweet Adelines will hold its practice Wednesday night at the WTCM Radio Station instead of the regular Monday night rehearsal.  Members are invited to attend a social hour from 8 to 9 p.m. to become acquainted with the new members.

In the movie theater on this day:  “More Than a Miracle” starring Sophia Loren and Omar Sharif.

Dare-All Squares Square Dancing Club will dancxe Friday evening at 8 p.m. at the Garfield towhall.  Darrell Figg will be the caller.  All western style square dancers are invited and memers are reminded to bring sandwiches.

Quints born in Australia.  Australia’s Braham quintuplets weighed i a more than three pounds each today, and doctors say the three girls and two boys are doing well.  They were Australia’s first surviving quints.

Half of the world’s present population has been born since World War II as of this date.