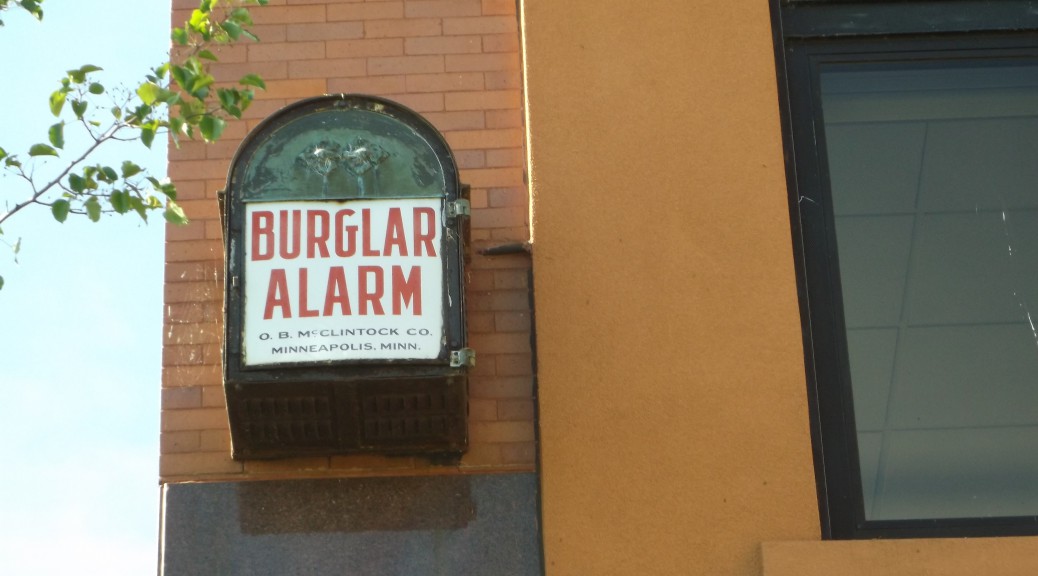 For the benefit of the customers, we assume this business uses a “security system” now, as opposed to the Burglar Alarm pictured here. On what building in downtown Traverse City does this alarm box remain?

Thanks to Betsy for her masterful location of this Burglar Alarm! The alarm is hanging on the Fifth-Third Bank on the corner of Front and Union, on the north side of the building; The alarm has a twin in this city, found on Bijou by the Bay (formerly the Con Foster Museum).

The O.B. McClintock company of Minneapolis was the most prolific in alarm company sales to banks from the early 1900’s to 1947 when it was taken over by Diebold. You’ll find evidence that  thousands of these alarms were in use at banks all across the country, as many are now for sale online. According to Diebold, these boxes were operated by a control panel enclosed in the vault and triggered by a switch just inside the vault door or push buttons at each teller cage. If the vault door was opened before the opening hour in the morning or any teller would push the button during the day it would send the current from dry cell batteries within the panel to the bell inside the alarm box. Those alarms were intended to get the police running their way, and could be heard for blocks.