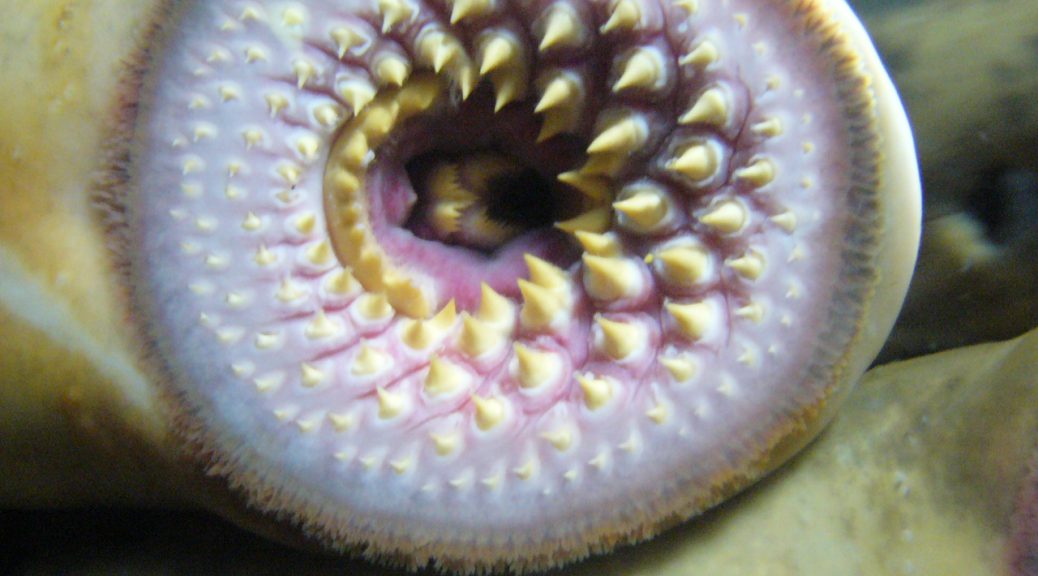 There are few animals in the world that get less respect than lampreys.  They are ugly, lacking fins and the grace of a recognizable face.  They are slimy.  They are deemed inedible, at least in the United States.  They parasitize fish we like to eat.  They are the animals we love to hate, and yet…

My encounters with lampreys have been few, but always interesting.  There was the time my fish class went to a lamprey weir many years ago, and allowed them to suck onto the palms of students’ hands.  Lacking jaws, that is all they could do—give us an intense rubbery kiss.  Perhaps it was the time of year or else the disgusting nature of mammal skin, but they did not try to bore into our flesh to suck our blood as they might do with the Lake Trout.  It was hard to detach, its body not offering traction for the other hand to pull it off (scraping turned out to be the best method).

Earlier that day we had gone upstream with a box sieve, a wooden frame with a wire screen affixed to the bottom, to capture immature lampreys.  We would plunge it into a muddy bank and swish it around in the water to wash out the mud and silt.  What was left were—among other invertebrates—many several-inch long young lampreys.  Many, if not most, were native to Michigan, not having invaded by way of the St. Lawrence Seaway as the parasitic sea lamprey did.

Our native lampreys seem content to wallow in the mud, straining out organisms from the water with gill filaments.  They transform into adults, mate, lay eggs, and die, much as salmon do.  The sea lamprey goes one step farther, leaving its stream for the Great Lakes, feeding off fish such as Lake Trout for one year or more, finally returning to a stream to lay eggs and die.

Because lampreys return to streams to spawn and die, they can be controlled by several methods.  The simplest of these is to erect a dam to keep them from migrating upstream where they may find gravel beds for spawning and muddy banks for nurturing the young larvae.  The Union Street dam serves this purpose in Traverse City.  Unlike Brown Bridge dam upstream, it will not be removed, in part, because of this useful function.  Another method of controlling sea lampreys is to poison them periodically with poisons that work only on lampreys.  It is necessary to use these chemicals once every several years because the larvae spend so much time buried on mud, feeding on microscopic organisms.

Oddly, we humans are related to these creatures.  While lacking a jaw and a skeleton made of bone, lampreys have a nerve cord running along its back, a larval rod-like structure in its back that evolved into a backbone, and gill slits towards the mouth.  We all have those features as embryos, but they change into other things as we develop.  Our gill slits morph into a jaw and the structures in our necks, and our dorsal nerve cord lies within a bony column of vertebrae.

Lampreys and their kin are the ancestors of the dominant groups that we know today: the bony fish, amphibians, birds, reptiles, and mammals.  They are evolutionary throwbacks, relics of a time that preceded the appearance of more modern vertebrates.

The kiss of a lamprey is singularly unrewarding, both for that animal and for us.  To an appropriate fish it is the kiss of death, since many fish die as their blood is drained out.  It is a kiss of death: Is that the reason we cannot love these animals—they plague our sleep with night terrors?  Are we remembering our ancestral past when, as fish, we felt the sucking disk attach to our side, the creepy sensation that spelled our doom?  Should we let down our fears as the Europeans have done to feast upon these animals?  I don’t know—you go first.

However, should any readers be inspired to extend their range of culinary skill, I offer this recipe for the preparation of sea lampreys.  It was taken from the Middle Ages, so cooking methods will seem a bit unorthodox.  However, the success of the preparation may explain why King Henry I of England died from eating a surfeit of lampreys.  He could not hold himself back from eating them all.