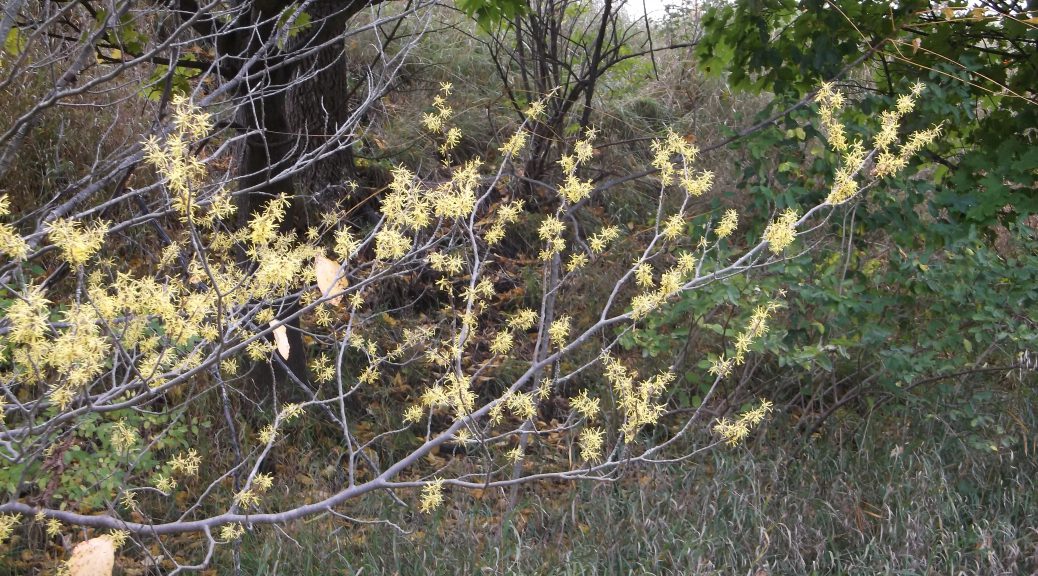 Which native plant is the last to bloom before the onset of winter?  Everyone knows Chrysanthemums, but they aren’t native to Northern Michigan.   Certainly, goldenrod blooms late, as do asters.  Mostly goldenrod has finished by the time our most elegant aster, the New England Aster (Symphyotrichum novae-angliae) begins to bloom. It can be found growing in moist places in the sun, its hairy leaves clasping the stem giving away its identity even before the flowers appear.  When they do open, they present a glorious purple, sometimes almost a deep red.  They do bloom late, sometimes as late as mid-October, but they are not the last to flower.

Jerusalem artichokes (Helianthus tuberosus), a native sunflower, show their bright yellow flowers at about the same time as New England Asters.  Standing as tall as seven feet, they prefer open fields, forming dense thickets of flowers as they spread from underground rhizomes—which make a fine food if the preparer has enough time and energy to clean and cook them.  Jerusalem artichokes grow tall, but will not be confused with the more common sunflower used for seeds enjoyed by humans and birds alike.   Jerusalem artichokes, (sometimes called ‘sunchokes,’ brighten our lives at a time the days grow shorter and shorter, but they aren’t the last to bloom.

The last to bloom is witchhazel (Hamamelis virginiana), a small tree that grows at the edge of the forest or as an understory tree.  Its leaves are distinctive with wavy margins, never toothed as most leaves are.  Its flowers become most apparent just after its leaves have turned yellow and fallen off.  Four thin yellow petals can be seen hanging from twigs sometimes as late as November.  They aren’t as spectacular as the New England aster or the Jerusalem artichoke, but they give us joy that a plant has the fortitude—or foolishness?–to brave days of 45 degrees at a time when pollinators are all dead or sleeping.

Witchhazel not only cheers us up at the end days of autumn, but it presents itself as a useful and interesting plant–useful, because its extract gives us an important astringent used in folk medicine, a treatment useful wherever swelling is a problem—and interesting because it can explosively shoot out its seeds from their capsules.  Earlier in autumn they do just that.  At such times it might be a good idea to wear safety glasses when walking in a grove of witchhazel because seed missiles can fly 30 feet in the air, certainly with enough force to put out an eye!  (I hope readers know me well enough to suspect foolery).

Let us take joy in the last flowers of autumn.  It will be many months before the crocuses send up their bold stalks in March.