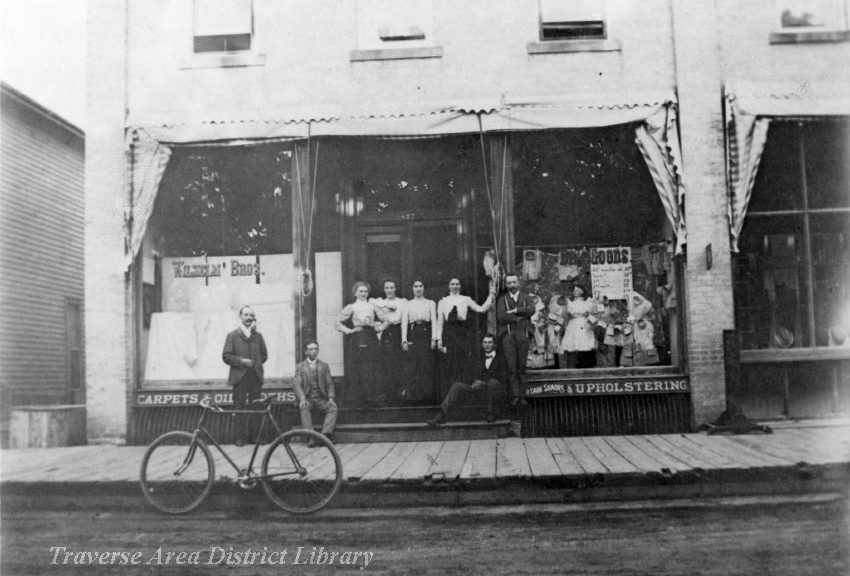 By Bob Wilhelm, author and historian of Traverse City

The Grand Traverse Journal already published the first three chapters of the late Bob Wilhelm’s history of the Wilhelm family in the November, 2016 issue.  Now we wish to continue the project with this excerpt describing the Bohemian community along Union Street in the 1880’s and the construction of Wilhelm’s clothing store at the corner of Union and Eighth Street (now the AT&T store).  We plan to offer Bob’s book online in its entirety at an early date.

Around 1880 when Anthony Wilhelm took up residence in Traverse city, Union Street was “paved” with sawdust its full length from downtown to Sixteenth street. The wooden South Union Street bridge was low and the slope from Seventh Street to the river provided fine sledding for the young.

In the spring when the pork barrels were low, people could be found on the banks of the river with dip nets and spears catching suckers, bass, pickerel and trout.

Two local Indians, Louis and Jake, who lived in a slab wigwam on Sixth Street near the river sold fish to the neighborhood. The price was always 25 cents regardless of the size or amount of the fish.

When the pigeons returned along the river, rifle fire was common.

There were only a few buildings from Seventh to Tenth streets. On the west side of the street at the corner of Seventh and Union was the Franz [?] Wilhelm’s meat market. Other buildings were the homes of Mrs. Furtsch, the Bartaks, E.P. Wilhelm, Charles Dupres, and Harry Holdsworth.

On the east side of the street were the Boardman River House, Chaloupka’s Saloon and Prokop Kyselka’s home at Eighth and Union. Further up the 500 block was the Dezorme home, the convent, Mattison Drug Store and the residences of Morris Sabin and the Weidenhamers. South of Tenth Street was a forest of second growth and poplars.

Unlike so many of the lumberjacks,  Anthony Wilhelm managed to save a few hundred dollars from his many years in the lumber camps. He joined his cousin John  Wilhelm buying and selling real estate. On the north side of Eighth Street near Union they purchased several lots. John kept two and built his home.

In 1883 Anthony exchanged the remaining parcels for lots 19 and 20 at Union and Eighth.

The March 26, 1885 issue of the Grand Traverse Herald reported:

Ant. J. Wilhelm is getting the material on the land for a brick building on the corner of 8th and Union Street. The building will be 25 x 60 feet, two stories and basement. It will be built entirely of white brick.

The April 23 issue of the Herald reported:

Work will begin soon on the fine brick store for Ant. Wilhelm corner Union and Eighth. The present building has been bought by Jas. Dunn and is being moved to his lot  corner Eighth and Cass St. He is putting in a cellar and brick foundation. This building was the first dwelling on the  south side of the river. The new building will be 25 x 60 feet. The foundation will be quarry stone. The west and south fronts of the best pressed brick, the first floor front of iron and glass and the front iron. E. Adaley has the contract and J.G. Holliday will have the carpenter work. The building will cost about $3,500.

The existing building formerly occupied by Caloupaka’s Saloon was raised and placed on the crib and moved on rollers. A large log would be dug into the street with a windlass. Ropes would run to the building and teams of horses or oxen would turn the windlass and slowly move the building.

Since all the brick production of the J.W. Markham’s brick yard on West Bay road was being used to build the Northern Michigan Asylum, it was necessary to go out of the area for supplies. White bricks were purchased in Zeeland and moved to the Lake MIchigan coastline to be transported by boat to Traverse City. The limestone foundation was purchased from the owner of a lumber schooner who had used it for ballast. The beams were two by twelve inches. In the front of the store were cast iron girders. The reason for the twenty five foot width was that this was the maximum width that could be constructed without extra support.

The building was constructed as a millinery shop for his sister Christine, but never opened.  While visiting her brother Charles in Milwaukee, she met William Theopolis Bunce at a church party in Wauwatosa, Wisconsin. The couple was married April 13, 1889 at the Congregational church in Milwaukee. Bunce  worked for the Chicago, Milwaukee and St. Paul Railway from the early 1880s until his retirement in 1942. In May 1946, Bunce was featured in Ripley’s Believe it or Not because he “has worn a fresh carnation in his lapel every day for the  past 65 years.”

With a vacant building, the Bohemian community urged Anthony Wilhelm to open a clothing store to serve the needs of the neighborhood. Anthony and his brother Emanuel formed the Wilhelm Brothers partnership in 1885. The business opened in 1886.

Emanuel Wilhelm had returned to Traverse City after spending three years in Kansas, Colorado and New Mexico. He was employed in cattle ranching, railroad work and mining. With his wanderlust satisfied, he moved to Milwaukee where he took several business courses and worked seven years before returning to Traverse City to join his brother.

With the establishment of the partnership a second 25 s 100 foot addition was constructed on the north side of the original building.

The Northern Michigan Asylum was nearing completion so bricks could be purchased locally from the J.W. Markham brick yards. The cost was $3.00 per 1,000 bricks.

The first advertisement announcing the opening was carried in the March 4, 1886  Grand Traverse Herald:

A large invoice of Spring Clothing just received. Men’s and Boy’s Suits in all styles and qualities at prices that will surprise you. No shoddy or second hand goods in stock. It will be to your interest to inspect our goods and learn our prices before purchasing. We will have a well selected and complete stock of dry goods about April 1st, 1886. It will be our aim to give our customers honest goods and perfect satisfaction in every respect.  South Side Brick Building Wilhelm Bros.