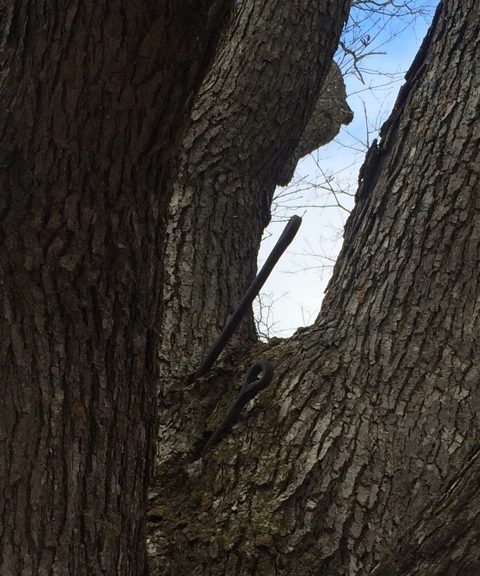 Two iron loops are buried in the wood of this White Oak, located on the shores of Boardman Lake, on the Highland Assisted Living Center grounds. We speculate that the tree, given its current size, was already very large a hundred years ago, especially since White Oaks grow so slowly . What were they used for? We will give you our hypothesis next month!

One theory is that the hardware was attached to a line that ran across Boardman Lake and connected to another post on the west side. The line was used to confine logs for release to the mill, further downstream, at the mouth of the Boardman. It’s only a theory!

Another theory is that the hardware was part of a pulley system, and either logs or barges were pulled out of Boardman Lake at that spot. The location is close enough to railroad tracks that it’s plausible this was a loading area.

One thing is for certain, the white oak is old enough to have been a large tree, even a hundred years ago! The hardware is so deeply embedded in the wood, obviously having been inserted in a much earlier time, and could have supported a lot of weight. 2 thoughts on “Skewered Tree Theories, but No Answers, For March Mystery”