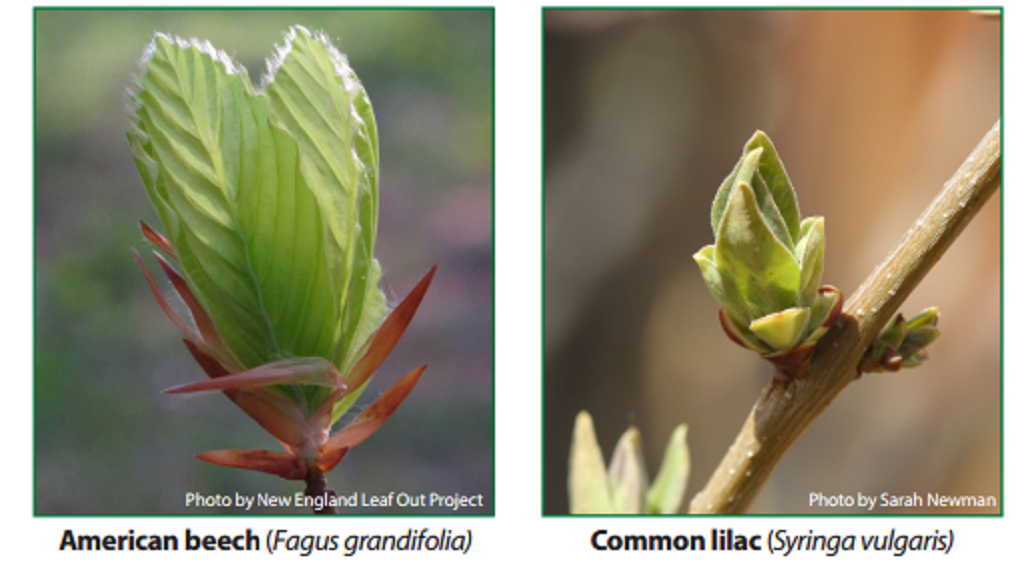 Why are some trees species eager to leaf out early in spring while others stay dormant until much later?  Poplars and maples break dormancy quite early, sometimes before the last frost, while black locust, oaks, and catalpa bide their time, often waiting until late May.  Certainly, as with most things in nature, many factors explain the difference, but here I would like to concentrate on one of them: the kind of wood trees make.

Wood is the water-conducting tissue of a plant.  Under the microscope it appears to be made up of long, torpedo-shaped cells liberally sprinkled with holes to let water pass through.  Wood is mostly made of these cells–called tracheids.  Pine trees have no other specialized cells to carry water up the tree, but broadleaf trees do, vessels.

Vessels are not torpedo-shaped at all, but resemble soda straws.  You need a microscope to see them, but they are quite large as cells go, and that size can be a drawback.  If air bubbles form inside them or ice crystals form in a late spring frost, they can be damaged so that no water goes up to service the expanding leaves.

Trees with large vessels are especially at risk.  Just when buds need water from the roots, none is forthcoming.  The solution, for such trees as black locust and oaks, is to manufacture a ring of vessels early in spring to carry the water up.  The trouble is, it takes time to do so, time which the tree yields to other species that do not have to form a fresh layer of vessels, maples and poplars.  That means those species get the jump on those working to make new vessels.  Trees that make vessels lose out for a time in the battle for sunlight.

For all that, they are quite successful.  Black locusts are “weed trees,” growing rapidly like weeds, whole groves of them joined together with underground rhizomes.  A white oak takes a different pathway, putting its energy into growing a single individual.  Both trees have a ring of vessels laid down in early spring, a ring clearly visible in the wood’s annual growth rings.  They will serve as the major plumbing system until dormancy in the fall.

However, some ring porous trees leaf out early.  The explanation, according to one researcher, is evolution: they simply evolved in a warmer climate, spreading later to the North.  Science is never straightforward in the answers to questions it provides.

Shrubs leaf out early for a different reason.  They need to get as much sun as possible before the large trees expand a dense canopy of leaves above.  This year, see if that is not so: Do smaller native shrubs leaf out before the trees of the canopy overhead?

The time of leafing out—budburst some call it—varies according to the year, the habitat, the species, and the weather.  Naturally, a warm spring hastens the process, while days of frost inhibit it.  In these days of climate change, trees spread their canopies earlier on average than they used to.  They flower sooner, too, and they change color later in the fall.  In recent decades southern species do better than before in northern climates: Will pecans enjoy the newly changed winters of Northern Michigan?

One project —budburst—seeks to enlist amateur scientists in charting the leaf-out times for different tree species.  If readers wish to join this year’s study, they can sign up this year at budburst.org