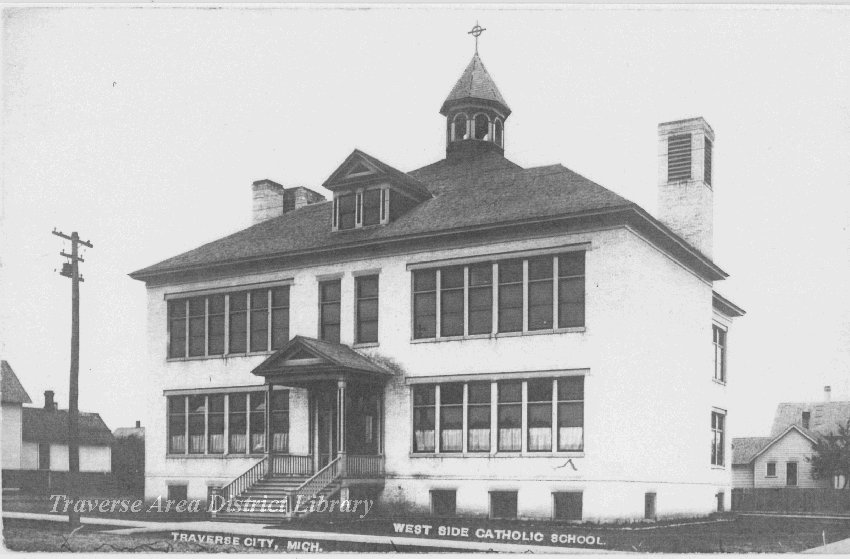 For those of us who appreciate the historic architecture of Traverse City, a sad fact is that many of our early buildings no longer exist. For most buildings, it has been either a result of fire or progress. When it comes to our historic schools, it is a combination of both reasons. There is only one remaining pre-1914 school in our town. It too, however, will soon be demolished and replaced. In the upcoming year, plans to raze and replace the Immaculate Conception school have been put in place.

As early as January 1900, it became apparent that a second Catholic church was needed. The Catholic population of the city had grown dramatically and the St. Francis parish was becoming overcrowded. Many poorer, working class parishioners on the west side of town also felt it was inconvenient to travel so far. By late 1901, there was more talk about a possible new church and school for the west side. This side of town was home to many Bohemian, Polish, French, and German immigrant families who did not all speak English. They voiced their desire to be able to attend services closer to their homes, and  in their own languages. St. Francis only conducted mass in English.

In May 1902, it was decided by a church committee to establish a new parish. It would be called the West Side Catholic Church and school. The Bishop at Grand Rapids appointed Rev. L. Krakowski, who had been associated with the St. Francis church as well as other parishes in the region, to establish a west side congregation and start the process of raising money for a combination church and school building. Fundraising was enthusiastically begun. Oyster suppers were held, plays and performances put on at the City Opera House, ice cream socials, raffles and many Pedro card parties were held, all to raise funds for the new structure. It didn’t happen quickly, however.

After much discussion between committee members, a location was chosen near the corner of Second and Division streets.  In January 1903, Rev. Krakowski went to Grand Rapids to get the official approval of the Bishop for the new church.

For two long years the parish worked to raise money for the proposed $15,000 structure to be designed by local architect, Fred E. Moore. Construction began in the spring of 1905. Contractor Bert Wilhelm supervised the building of architect Moore’s plans. The building plans included plumbing even though there were no water lines or sewers on that part of the west side at the time. It was decided by the City Engineer that temporary water and sewer lines would be extended down Division St. to accommodate the new structure, but, since plans to install city sewers there were not yet in place, “the easiest and cheapest [sewage] outlet would be to build from Second Street to the Asylum Creek at a cost of $150.” [TCRE 8 Aug., 1905]  The building was completed and ready to accommodate students by the beginning of the school year.

The Immaculate Conception Church  was officially dedicated on February 22, 1906.  Rt. Rev. Bishop Henry Joseph Richter of Grand Rapids, assisted by seventeen priests of the diocese conducted a four hour service attended by over 700 people.  So many people came that they filled the hall to standing room only. Many who came were not even able to  get in. The new church would have Rev. John J. Sheehan as priest in charge, with the school staffed by the Sisters of Mercy of Big Rapids.  The small parish worked through difficult circumstances, but eventually paid off the mortgage in thirty years and became debt free. The church and school were operated in this building until it too, became overcrowded. It was always intended to be a temporary situation- having the school and church in one building. By 1951 it was time for more room. “In the last few years the parish has grown…overflow crowds demanded an assistant priest, but even with four masses each Sunday, the church remained overcrowded and the school had to limit its enrollment for lack of necessary classrooms. The only solution was a commodious new church to accommodate the ever increasing throngs and to enable Catholic visitors to attend mass in the summer and  to allow expansion of school facilities.” [TCRE 28 May, 1953]  A campaign began to raise money for a new church. In 1951, Architect Harford Field was hired to design the modern structure. Ground was broken on May 23, 1952, “the cornerstone was laid and the bell blessed on August 10, 1952 in a colorful ceremony presided over by Monsignor R. H. Baker, vicar general of the Grand Rapids diocese. The church was completed and opened for services on Easter Sunday, April 5, with Rev. Passeno saying the first mass.” [TCRE 28 May 1953]  The church was officially dedicated on May 30, 1953.

Seven years later, it was clear that a larger school was critical. The parish officials once again turned to architect Harford Field to design an addition to the school. The new school building would cost over $400,000 and include “eight classrooms, art room, library, music rooms, visual-aid room, general administration offices, cafeteria, kitchen, adult social room and gymnasium-auditorium…” [TCRE 20 May 1961]  At the time, there were over 400 students enrolled in first through eighth grades which were staffed by the Sisters of Mercy as well as lay teachers.

So, fast forward to the present. Once again the Immaculate Conception school has out-grown its facility. In September, 2016, plans were announced that replacement of the 1906 and 1961 buildings was being discussed and brought to the planning commission for review. At that date, $9 million had already been raised for the new  $12 million structure.

Yes, it is sad that another historic building will be demolished, but that is the way of progress. The cost of renovating old buildings to today’s standards  is not  always the best solution, especially when so much more space is needed. This has been the consistent history for the majority of our old schools. Most were demolished during the 1950s because they had become out-grown, out-dated and just not in line with modern school needs and standards. So, the last of the city’s pre-1914 schools will soon be a memory, but the new building will be an attractive asset to the community and will meet the needs of the school and parish.

Though not the very first school buildings in the city, these were the first brick structures:

Julie Schopieray is a regular contributor to Grand Traverse Journal.