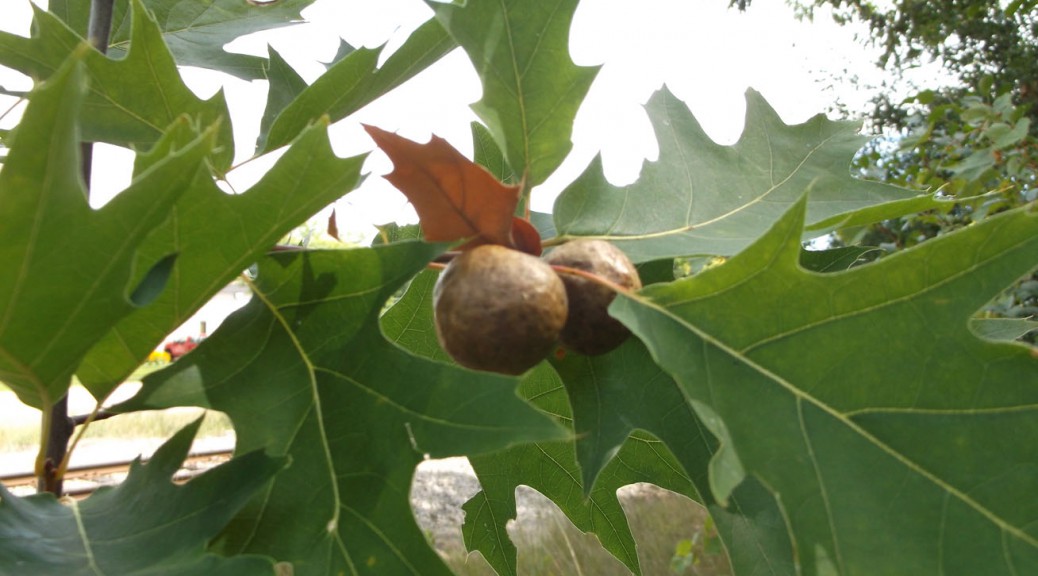 Oak apples are clearly a fraud.  Everyone knows oaks make acorns, not apples.  Still, the term exists—and if you look carefully in mid- to late summer, you might even find them.  Oaks grow in Northern Michigan, occupying the northern boundary of their range with few individuals being found in the Upper Peninsula.  In Traverse City we can find white oaks—those with rounded leaf lobes—and members of the red oak group—those with pointed lobes.

Compared to real apples, oak apples are puny, only a couple of inches in diameter, lacking both the texture and the crunch of the real thing.  If you open the firm papery shell of one, you may find long, stringy fibers extending from the rind to a central nucleus.   Alternatively, you may find that space filled with spongy matter like packing material.  This wooly stuffing contains tannin, a brown pigment that especially suited for artwork and documents of many kinds.  Here is a recipe typical of that Leonardo da Vinci might have used:

Take an ounce of beaten gaule, three or four ounces of gum arabicke, put them together in a pot of raine water, and when the gum is almost consumed, strain it through a cloath, and put into it almost halfe a cup of victriall beaten to a powder. A Booke of Secrets (1596) p. 5

Gum Arabic, a gum from the acacia tree, was used as a binder for the ink; “victriall” (vitriol) was nothing more than iron sulfate, obtained from passing water through “sulfurous earth” and exposing it to iron.  The resulting ink has a bold blue-black appearance, though it fades to brown as manuscripts age.  Many of the world’s finest artists employed gall ink in their drawings, Rembrandt and Van Gogh to name two, and composers like Mozart regularly used it for their musical scores.  The permanence of the ink is demonstrated by the masterpieces that remain for us to enjoy today.

If apples are fruit, then oak apples are not—since they do not contain seeds.  That being the case, what causes oak apples to form?  The answer lies with a tiny wasp, Amphibolips confluens.

In early summer the wasp deposits its egg on a young leaf.  The egg and the larva that grows from it secrete plant growth substances that compel the oak to make the oak apple.  After growing inside its comfortable chamber, the young wasp emerges to find a mate—both sexes are produced in equal numbers.  After mating, the females crawl down the trunk to lay their eggs on the roots of the host oak tree.  The young that hatch are all females,–a completely new generation!  They spend the winter underground, feeding casually on the roots as needed, but mostly remaining dormant until the weather warms.   When the young oak leaves are just the right size, they ascend the tree trunk to lay their eggs, thereby completing the life cycle.

Oak apples are not the only galls formed on oaks.  In fall in Northern Michigan white oaks shower the ground with pea-sized leaf galls, each one carrying a larva wasp.  Acorns and twigs harbor still more galls, all caused by the same family of wasps, the cypnids.  It is hopeless to wipe them out, the two species, wasps and oaks, having evolved together for untold generations.  Besides, who would want to?  Galls are fascinating objects and useful, too.  Won’t you find a tree full of oak apples and make your own ink this summer?