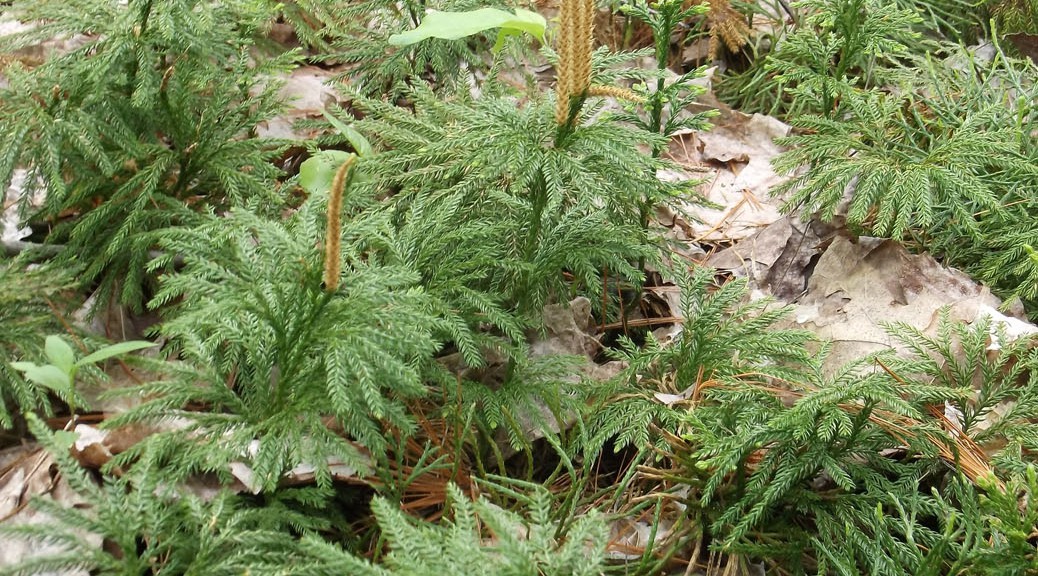 Club mosses are not mosses, nor are they armed with clubs.  They are small, however—only a few inches high on average—and are easily missed by hikers and those out for casual walks in the woods.  Like mosses, they reproduce by spores, but, unlike them, they have vascular tissue to transport water from the roots (like flowering plants).

Most species of club mosses bear those spores on a stalk held above the plant proper, this structure called a strobilus (or, in plain English, a club).  They shed their spores to the wind abundantly in the early summer: Just nudging a strobilus will send a cloud into the air, perhaps a danger to those with allergies, but perhaps not, since tree and grass pollen wreak far more damage.

Once in our history those spores had economic value.  In the days before photographic flash, photographers would ignite a charge of club moss spores to produce a burst of light.  Glass plate negatives were thereby exposed, making it unnecessary for subjects to spend many seconds in a strained pose.   The spores contained tiny droplets of oil, which instantly caught on fire, much as flour dust ignites in grain elevator explosions.

Most club mosses are clonal: that is, they creep along the ground or else have underground rhizomes that put up new plants at regular intervals.  An old clone can be many meters in diameter.  In Leelanau county I have paced off one clone that occupied a circular space more than 30 feet across.  There is at least one exception to the clonal habit of club mosses, however.

The shining club moss, Huperzia lucidula, grows in clumps, successive plants growing from horizontal stem often hidden under leaves on the forest floor.  In addition to creeping forward in this manner, it spreads in a way that is singularly interesting to botanists and to people that like to play with other living beings.  I count myself among the latter group, having spent many enjoyable hours turning click beetles over to watch them click upright with a bound, feeding ants to ant lions in their dens, and pestering pill bugs until they roll up in balls.  The shining club moss offers as much amusement to me as those organisms do.

In August they have developed tiny springboards among the upper leaves, each one of which equipped with reproductive structures called gemmae, which are capable of growing into new plants.  If you depress the springboard with the tip of a pencil, it will react convulsively, jumping upwards and releasing its gemmae.

How far do they travel?  The answer is readily available to us.  Look at the clump of Huperzia and see how far the farthest plant lies from the collection that comprises the clump.  It grew from a gemma that was propelled from one of its parents, that plant often two or three feet away.  Perhaps safety glasses are called for when the springboards are springing!

Huperzia is one of a few club mosses that does not bear its spores in clubs.  In late summer you can see tiny yellow bodies in the axils of the leaves, each one a sporangium that will release its spores.  The plant is unique in that way, and will not be confused with other lycopods (a word that refers to this group of plants).  It is a joy to find one growing in a Northern Michigan hardwoods.

That is where I have always found them: a rich forest composed of beech, sugar maple, red maple, basswood, with an understory of ironwood and striped maple.  It prefers a rich soil with a measure of clay.  Some lycopods can be found growing on sterile soil in partial sun, too.  Frequently the naturalist is surprised by their appearance in such unexpected habitats.

Club mosses have little practical value.  By Michigan law they are protected from harvest by persons wishing to gather them on state land and sell them at Christmas time for decoration.  Apparently, their evergreen branches remind people of cedar boughs at that bitter time of the year.   Some species resemble tiny conifers and are planted in terrariums with varying success.  Dried, they might pass for trees in a miniature railroad layout or diorama.  In any case, they brighten our lives with their curious growth form and unlikely habits.