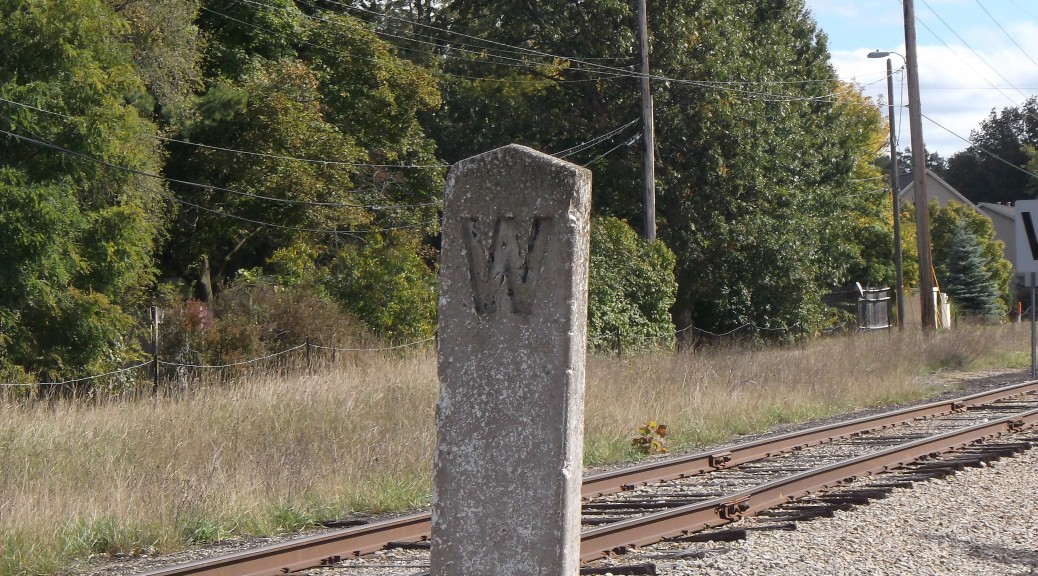 Dear readers, this marker is placed near the railroad tracks, close to the Woodmere Branch of Traverse Area District Library. What does that mysterious “W” stand for? And who should pay attention to it?

Here’s your clue: Your editors believe this to be rather antiquated, and feel that the “W” might be better replaced with a “H” for modern times.

Readers Rebecca and Robert hit the right notes with their answers! Indeed, the “W” on this marker stands for “Whistle,” which has been replaced on modern railroads with horns (and why we suggest the “H” needs to replace the “W” on these markers). Read Robert’s full explanation here:

“This is a whistle post that notifies the engineer that there is a road crossing where the whistle/now horn should be blown. Two longs, a short and a long blast of the whistle or horn/s is the Federally required law to inform people that a train is coming and they should be prepared to stop short of the crossing. Nowadays there are quiet zones in some localities that forbid the blowing of the whistle or horn/horns at crossings. In this case, the crossings are well protected by flashers and gates to keep motorists from crossing when a train is coming.”

Our readers are simply brilliant!  Thanks, Rebecca and Robert! 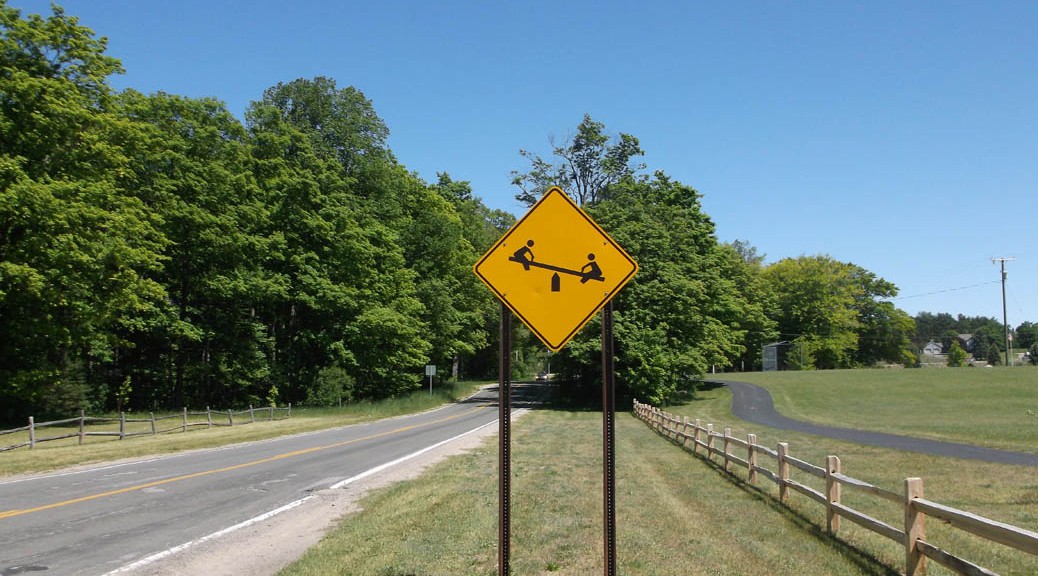 I am a member of a tiny group of history buffs entitled—we think amusingly—the Backspacers.  We occupy seats in a local coffee place for hours at a time, fueling our discussion of old buildings, old people, and old ways of doing things with plenty of pie and coffee.  While we have enjoyed long residencies in the Traverse area, none of us was born here.  For this we suffer the unspoken scorn of those few families that boast two or three generations in Northern Michigan.  That, however, does not raise our hackles in the least: we accept our short-termer status with grace.

One of the traits of us Backspacers is a pronounced tendency to linger over everyday things that express a connection to the past.  Long have we marveled at manhole covers with the writing “Citizens Telephone Company,” at the blockhouse just under the Union Street dam that was said to hold money for workers in the Flour Mill located there, at the faded printing on a landmark building declaring it to be the “Traverse City Gas Company,” at Civil Defense bomb shelter signs, at the evidence of fire that nearly consumed the Wilson Antiques building.  One of us—me, actually—spent time looking for cinders along Railroad Street, a curving road that paralleled tracks that accommodated coal-burning steam locomotives.

For Backspacers automobile travel can be hazardous.  Rapid stops occur as one or the other of us abruptly notices something out of time: an artesian well, an old home designed by a local architect more than a hundred years ago, the site of an old sawmill, or highway signs that suggest something misplaced in time.  In particular, those signs, yellow with black icons, fill me with joy. Take note of the warning sign advertising the presence of a fire station, found on Veterans Drive and elsewhere, no doubt.  Is it not comical—the silhouette of a 1930’s fire engine complete with helmeted driver?  How well it communicates “fire truck” with the ladder clearly hanging from the side of the truck.  No modern fire truck could substitute since most of them could be confused with any delivery truck in profile.  Still, you wonder how long we will keep an icon that resembles artwork from a children’s storybook.  A long time, this Backspacer hopes. The sign for “Farm Equipment” portrays a stereotypical view of the farmer.  An individual with a wide-brimmed hat sits on a primitive tractor, the stalk of grass clamped in his jaws apparently too small to be stenciled.  A modern fancy tractor with its enclosed air-conditioned cab is not pictured—since it lacks the clear connections among man, machine, and farming.  “Cattle Crossing” signs—the animals artfully represented–similarly urge caution in rural communities. The sign for “Playground” is equally charming: it shows two children on a teeter totter.  Oddly, teeter totters have been banned from modern playgrounds upon the discovery that they have injured large numbers of children.  Still, the image keeps the thing alive—at least for us adults—though young children have no idea what a real teeter totter looks like.  Another sign indicating children at play shows a boy (presumably) in shorts running carefree, possibly across the roadway.  He wears a curious conical hat, something I have never seen on a boy’s head.  Does it indicate archaic style or a figure from a foreign land? The image of a truck heading down a steep incline denotes a steep hill ahead, but the six-wheeler pictured and the admonition “Use Second Gear” seems out of place and time since it implies a manual transmission with three forward gears.  You can find such a sign on Leelanau County Road 616.  Of course, all of us old timers remember the installation of the “Runaway Truck Ramp” on M72 leading down to the Bay.  Some of us recall the small truck that wound up in the Bay before that salvation was constructed—was it in the seventies? Pedestrian crossing images tell us something about our society.  The crossing sign near a school shows a larger figure, wearing pants, with his hand on a smaller figure wearing a skirt.  Hazarding a guess about the gender of the figures—and nowadays this is only a guess not a firm conclusion—a man or boy seems to be walking with his hand upon the girl’s arm.  To me this suggests he is protecting her as she braves traffic in the crosswalk.  Could we have the larger figure wearing the skirt with her hand on the boy?  After all, it is just as likely an older sister is guiding her rambunctious younger brother across the street.  But, no—it is the way it is.  Boys protect girls, not the other way around. Then there are the wonderful depictions of animals.  In particular, the antlered icon rearing on its hind legs says “Deer” so boldly no one could miss it.  Often sharpshooters are unable to miss them, too, as they pepper them with indentations with their deer rifles, perhaps in frustration at never hitting the real thing. Bear crossing signs appear nearby, too, near Cadillac along highway M115, for one.  The mother bear and her cub are shown, providing gender equality to the buck shown on the deer sign.

Backspacers are not content to note the existence of relics.  They must do research to find out more.  Are the signs of Michigan recognized in other states?  In other countries?  Exactly when were they created and who does the creating?  The web provides us with a few answers: The United States Department of Transportation Federal Highway Administration sets the standards for traffic signs.  It publishes the official manual for signing, the Manual on Uniform Traffic Control Devices (MUTCD).  The manual has been constantly updated from its beginnings in 1935, the latest issued in 2009.

The 1971 edition expanded the kinds and numbers of signs considerably.  An effort was made to bring signs from various nations into conformity, telling us that the rearing deer beloved of Backspacers and most Americans can be seen in countries that deer inhabit.  The figure for Japan, though, faces the opposite direction from its American counterpart since Japanese drive on the left side of the road.  Perhaps the antiquated fire truck pictured on our signs represents those still in operation in less wealthy lands.

The history of standard sign usage goes back to the beginning of automobile travel.  In the first and second decades of the twentieth century there were no standard signs across the United States.  Signs could be any shape, any color, any size—with varying print fonts, messages, and iconic pictures.  In 1927 the Joint Board (a precursor to the MUTCD) published the specifications for the signage we use today.  Warning signs were to be yellow with black print in the shape of a diamond.  The standard shapes and colors for railroad crossings (round), stop signs (octagonal), and informational signs (rectangular) were spelled out in the report.  All at once highway signage had become clear, modern, and universal.

Yellow warning signs have proliferated over the last seventy years, indicating greater sensibility of automobile drivers to their driving environment.  How else to explain “Deaf Child Area”, Moose Crossing, or even an image of a mother duck with her ducklings trailing after—presumably a “Duck Crossing” warning?  We Backspacers hope these images will never disappear even as we proceed into an age without teeter totters and fire trucks without ladders.  Without pretension, they provide windows to our not-so-distant past.