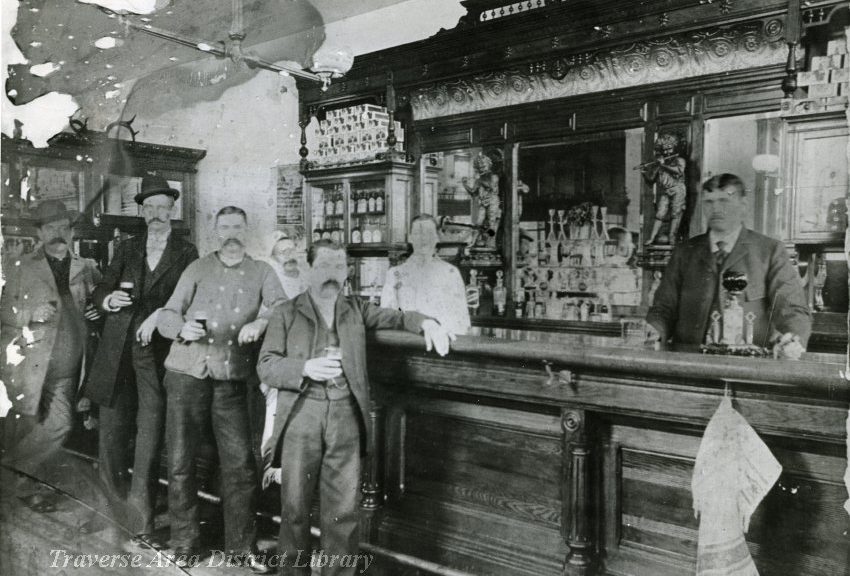 This article on Sleder’s Tavern was originally published in the January 2017 issue of the ThumbPrint News, a wonderful publication filled with history, insight, life-hacks and just plain fun. We are indebted to the editors of ThumbPrint News and author David Odziana. Read and subscribe at their website: http://www.thumbprintnews.com/

For many residents of Michigan, a vacation often consists of driving a few hours north until they reach one of the many popular tourist destinations throughout the state.

Traverse City is one of the more popular vacation spots in the Lower Peninsula, enticing visitors with an array of year-round activities. The area once known as Slabtown and Little Bohemia has an extensive history, which is a big part of the beloved city’s charm.

Sleder’s Tavern is one of the most established buildings in the area with the prestige of being one of the oldest restaurants in the state. A Bohemian wheelwright named Vencel Sleder came to the area in the second half of the 1800s, and soon made the decision to construct a local tavern where residents could visit with friends over a home cooked meal after a long day at work. Since most able hands were busy working in the mills or on their land, only Sundays were available to work on the restaurant. This caused construction to complete the building to drag on for three years. The building was manufactured using rejected wooden slabs from the local sawmill; Sleder’s Tavern was finally finished in 1882.

Vencel conducted his business with the mentality that goodwill is good business, later becoming the company’s slogan that allowed the bar to survive many dark economic times. The second generation of the Sleder family to work at the tavern was Polly Sleder, who was well known for offering her household medical advice with each $1.50 case of beer. It was also said she gave patrons a free beer and a double shot of liquor for each case of beer purchased. Prior to inheriting the tavern, Louie Sleder’s first job at the bar was to clean out the 21 spittoons throughout the restaurant, receiving 25 cents for each one. By 1920, Sleder’s Tavern was faced with a great deal of uncertainty, as everyday life began changing drastically during this time.

When Prohibition was enacted in Michigan, Sleder’s Tavern was already established for nearly 40 years, which gave the company a better chance of surviving the state’s dry period that lasted more than 15 years. Sleder’s secret for thriving during the country’s ban on alcohol was his special root beer, which was well known during the time. The mixture, which was actually a blend of rye and bourbon, was served in tea cups free of charge to all visiting law enforcement – this allowed the family business to flourish when a majority of taverns were forced to close their doors. Throughout the 1920s, local law enforcement mainly focused on out-of-town bootleggers who were bringing alcohol into the area. This continued until the 1930s, when state police decided to enforce the laws local police were ignoring. Sleder’s Tavern was quickly raided, and police discovered two stills, 231 pints of beer, 50 gallons of mash used to brew alcohol and six quarts of moonshine. Due to his clean record, Louie was only charged with possession, which resulted in a $600 fine, instead of the much stiffer punishment that came with a bootlegging charge. This raid was most likely a result of pressure from citizens, who collected 450 signatures to get local police to “exercise a higher regard for the moral protection of the youths of our city and a more thorough enforcement in dealing with violators of city ordinances, federal and state law.” Despite the fact that the petition didn’t mention alcohol or prohibition, it was assumed the paperwork was referring to the lack of enforcement on alcohol in the city.

During the 1930s, the building underwent a few structural changes. Prior to this time, men and women were not allowed to frequent the same area of the bar. Instead, the men drank in the main bar, while the women had their own section in the back, which they would enter through a separate door. After Louie opened up the two rooms to make one large bar and renovated the second story ballroom into living space, many of the regulars who frequented Sleder’s were not happy about having women in the same area of the bar.

Although some things have changed in the building throughout its 134 years of business, many original features still remain. Time-appropriate stamped tin adorns the 12-foot-tall ceilings, original light fixtures still hang on the walls and much of the historic collectibles still decorate the walls, but one feature tends to grab the attention of thirsty patrons more than anything else. The original 21-foot mahogany bar, equipped with an old brass foot rail and embellished with cherry wood on the sides, has remained in the same spot since 1882.

Louie Sleder was the last family member to own the tavern before it was sold. After changing hands a few times, Sylvia and Bob Classens purchased the restaurant in 1975. The couple’s main goal was to ensure the historical aspect remained. Renovations they accomplished were uncovering the original hardwood floors, redoing the paneling on the walls and constructing a Victorian style porch on the side of the building. In 1992, Brian and Deb Cairns purchased the restaurant from the Classens, and shortly after, the couple tied the knot on the recently constructed porch. When the Cairns took over, they changed as little as possible – all five of the Classens’ children, as well as many of the previous employees, remained employed at Sleder’s after the tavern got new owners. Today, Michigan’s oldest continuously running restaurant sits in the same spot at 717 Randolph Street in Traverse City. While much has changed throughout the city from the time it was known as Little Bohemia or Slabtown, Sleder’s Tavern stands as proof that some things can truly stand the test of time.