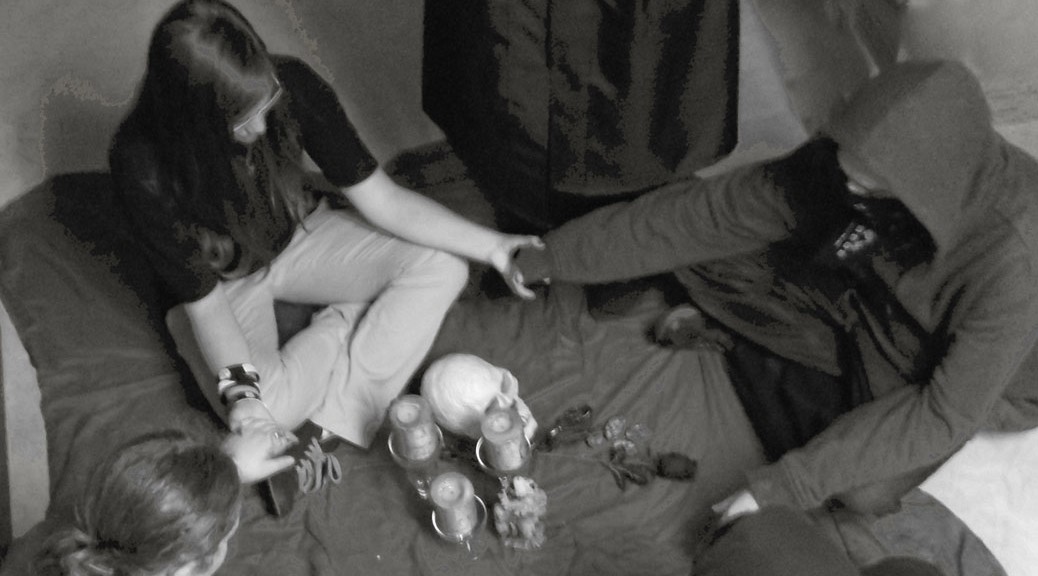 Copious amounts of thanks go to the Teen Sages of Traverse Area District Library, who were employed as free labor to illustrate this article. For more information and to get involved, catch up with the sages at http://www.tadl.org/teens.

Supernatural manifestations at the haunted house near Boonville Monday night were eclipsed by adventures in a purely human realm—when Mrs. C.R. Rogers opened fire with a high caliber revolver on the half hundred sightseers who had surrounded the house to await the nightly appearance of the celebrated Fortney Ghost.

So begins an article in the January 25th, 1922 Record-Eagle.  Boonville was an eastern suburb of the city, extending south along present-day Woodmere Avenue for some distance.  The house, itself, was situated  “south of Hannah and east of Barlow”, an unprepossessing frame building constructed only ten years before the article appeared.  No injuries were reported as a result of Mrs. Rogers’ fusillade of bullets: apparently, they were intended to scatter the crowd of onlookers, not murder them.

She was unprepared for the host of visitors loitering around her house because she was not aware that the Traverse City Record-Eagle had previously published two articles detailing the “supernatural manifestations” that infested her house.  Those manifestations included “a weird wail of a newborn babe, a light as bright as day that appears after midnight, and an eerie, luminous glow that cast fear into the hearts of onlookers.  With such advertisement, what citizens of the town would not want to trespass on Mrs. Rogers property?

It was not the first time the house was proclaimed haunted.  Two years before, another resident of the house, Francis Fortney believed the building housed a female ghost (of about thirty years old) which abruptly vanished up a hole beside the stove pipe—this according to the testimony of Fortney’s wife’s seventeen-year-old brother, Frank McPherson.  Mysterious floating lights also attended the haunting, their source unexplained and unexamined due to the absence of hand-held lighting.  The newspaper account takes the boy’s story seriously: His story had a convincing coherence, an analytical sequence, a profusion of detail that lent it a genuine aspect. These were not the half-baked ravings of an adolescent.

Fortney’s ghost—as the paper called it—dominated the front page for several days.  A newspaper reporter, taking courage in hand, explored the haunted house to look for evidence of the ghostly manifestations.  As the family had abruptly fled (leaving dishes upon the table as they ran),  he had the house to himself.  The hole beside the stove pipe where the ghost disappeared was plainly visible as was a detached piece of beaverboard residents had tried to nail over it—more than once.  Invariably it would come clattering down, no matter how firmly the nails were set.  The ghost clearly had the strength to pry it off whenever she wished to do so.  Other than that slim piece of evidence, there was no story to report from the home.

Fortney’s ghost disappeared from the pages of the Record-Eagle as fast as the specter disappeared up the hole beside the chimney.  The chief of police, John Blacken, subjected “French” Fortney and Frank McPherson to the “third degree”, firing questions at them one after another.   Under the ferocity of questioning, they buckled, admitting they had concocted the whole story: it had started harmlessly enough, but just snowballed after that.

Now, two years later, from the porch of the very same house that housed Fortney’s ghost, Mrs. Rogers was forced to break up a crowd by firing her revolver into the air over a new.  A friend of Mrs. Rogers corroborated her account as least as far as the unexplained bright light was concerned.  Only upon prodding his memory could he recall the crying of the babe.  This time the Record Eagle seemed less credulous that it did in reporting the ghost episode two years previous.

In the end, the latest haunting of the house went away as rapidly as the first.  Mrs. Rogers recanted her account, perhaps because a resident of the house, Charles F. Howard, was sought for bootlegging, a common offense during the Prohibition era.  Most likely she wished to get out of the limelight, her ghost story doing just the opposite—making her home the center of interest and controversy.

A TIME OF SPIRITUALISM, SEANCES AND THE OCCULT

What do these tales of hauntings tell us about the people of Traverse City who lived at that time?  Is it unusual for newspapers to report stories of the supernatural?  Why the inordinate interest in the supernatural, an interest that expressed itself in the assembling of “half hundred” onlookers in one case?  Would such reporting gain traction with newspaper readership now?  These are questions that probe the underlying values and customs of a different time.

From the 1890’s through the twenties spiritualism was a powerful force in America and in England.  Spiritualists—among them, Sir Arthur Conan Doyle of Sherlock Holmes fame—would attend séances conducted by guides to the spirit world.  Ouija boards reached the pinnacle of their popularity in the twenties—Norman Rockwell even did a Saturday Evening Post cover of a couple manipulating one.  They sat opposite each other with the board on their knees, their knees touching or not, a pose of extreme daring at this time.  Their fingers lightly touched a token which would move over the board as they jiggled it with their knees.  It might stop on Yes! if the question posed was, “Will I be divorced?”  Or it might spell out a whole sentence in answering a question, the token stopping for an instant at appropriate letters.   In any case, the toy appealed to those who took the spirit world seriously.  The owner of the patent, William Fuld, made one million dollars in 1920, a sum that would have to be multiplied by 20 to convert to today’s money.

Newspapers would occasionally tell about ghostly visitations within their communities, the story designed to attract interest–perhaps on a slow-news day.   While a single story of a ghost might attract a few readers, a whole series of articles extending over five days would heighten that interest even more.   That is what the Record-Eagle did in 1920, setting the story up in the second week of January.  While the newspaper expressed a willingness to listen to first-hand accounts of witnesses, it stood back a little, not jumping on board the occult band wagon.  After all, reporters were supposed to be journalists—and journalists should be skeptical of sources unknown to them.

Nowadays occasional articles still pop up in magazines and newspapers, but they seem more like curiosities than genuine stories based upon accounts by reliable witnesses.  They are printed wholly for entertainment value, not for insights into the world of spirits.  It is unlikely a tale of a haunting would draw a hundred people to the site where ghosts, bright lights, and the wail of babes have all been observed.  Or not.  At bottom, how much different from our grandfathers and great-grandfathers are we?

One thought on “Fortney’s Ghost: The Supernatural Comes to Traverse City”