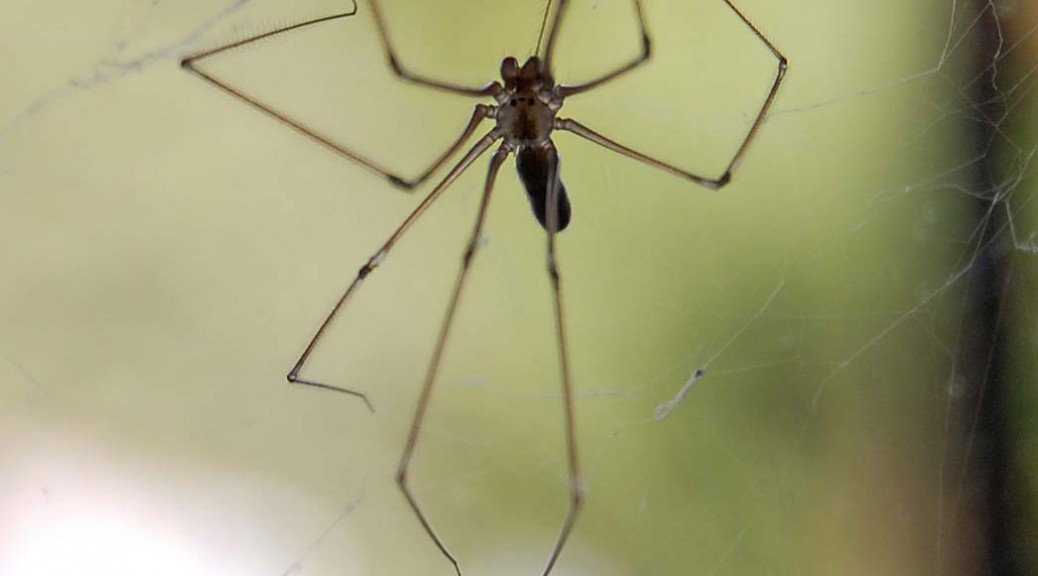 In winter the animal world goes to sleep—or, at least becomes less apparent to us.  In particular, the world of small living things disappears, the world of insects, millipedes, centipedes—and spiders.

The absence of spiders is particularly distressing.  They decorate my dwelling place inside and out during summer and fall.  In my youth I have been known to keep them as erstwhile pets, feeding them a disabled fly, perhaps, or some other insect.  Once, when I was in early adolescence, I kept a funnel-web weaver in my room, sustaining it with insect prey well into winter until my mother vacuumed it one day, not understanding my attachment to the animal.  The haiku poet Issa says,

I am hardly an expert in spiders: I encounter them separately as each enters my consciousness—by chance, not searching them out.  Some, like the funnel-web weaver can be identified by the shape of its web, a sheet of silk that tapers to a narrow opening where its inhabitant lives.  The orb weaver makes a gorgeous web with spokes and concentric circles.  I love the name of one of them, Argiope aurantia, a name that comes from one of the Greek naiads or water spirits.  She—and the inhabitants of webs are female—weaves a gorgeous structure out of the finest silk to capture whatever small thing blunders its way into the sticky strands, a story both horrifying and fascinating.  I confess as a child tearing of a leg of a grasshopper and feeding the twitching body to a yellow-bodied Argiope aurantia, poised in her web to bite and wrap up her prey.  Far from signaling the beginnings of major psychosis, it was just a small child’s introduction to life-and-death, an encounter that stays with me still.

Wolf spiders terrify us with their size—with legs extended they barely fit in a teacup—their furry bodies, and their speed as they flee from us or go after prey.  Similar to them are fishing spiders, one of which, the Dark Fishing Spider is the largest spider in North America, its body more than an inch long.  It journeys far from water, often winding up in cabins and homes near the water.  It feeds upon full grown crickets and small children (just joking). A naturalist friend of mine recently emailed me an image of one she caught in her home close to West Grand Traverse Bay.  With compassion, she merely let it go outside her home rather than crushing it with her heel.

Then there are the jumping spiders, nervous creatures with two great eyes in the front of its head, looking more like us that all the others.  They build no webs at all, preferring to wander about in search of prey, dragging a silk thread behind them.  With so much to say about them, they deserve a separate article in the Grand Traverse Journal.

Finally, there are the cellar spiders, the most common ones we see around the house.  With long legs and narrow bodies, they are sometimes erroneously called “daddy long legs spiders”, a term that signifies the harvestmen, not a spider at all.  They hang upside down in its poorly crafted web, a “cobweb” waiting for prey.  My favorite spider book, Spiders of the North Woods, tells me that when disturbed, they may shake their bodies, making them appear as a blur.  I will have to test that out.

Are spiders dangerous?  Not for the most part.  The Black Widow does have a poisonous bite and I have seen them around here.  A bite would sicken the victim but not kill him/her.  Other spiders hurt if they bite, but most of them cannot even penetrate the skin.  Many wounds attributed to spiders were caused by other vermin, fleas, ticks, or insects.

We need to show them respect, especially in the winter when we see few wild living things close to the house.  Maybe we can let the cellar spiders live out the cold months—at least as long as they stay in the cellar.

2 thoughts on “For the Love of Spiders”