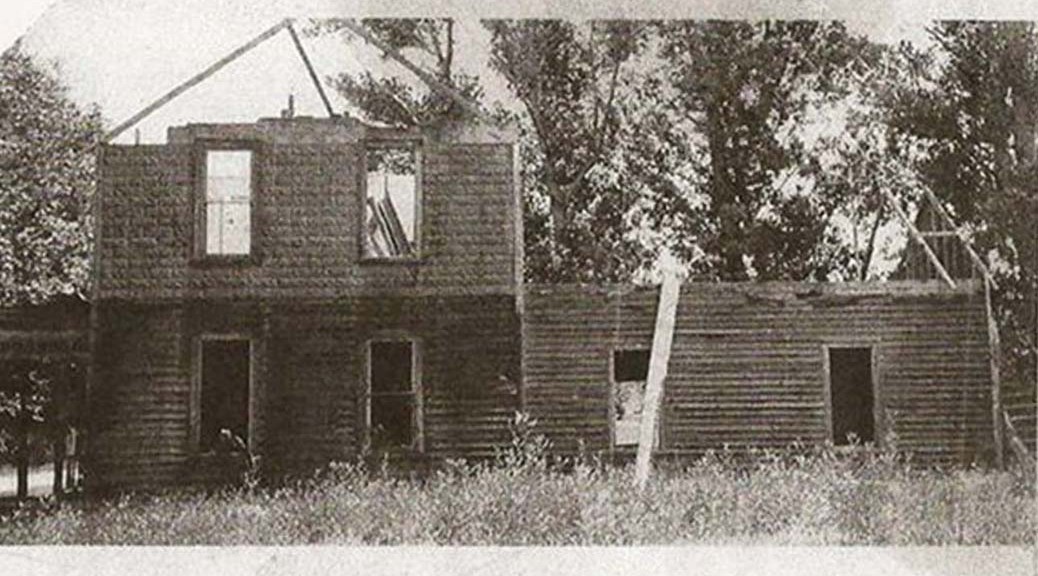 by Eileen (Brautigam) Reamer, with editing assistance from Pete and Connie Newell of Kingsley, known for their personal story writing workshops.

Eileen is the daughter of Fred and Neva Brautigam. She resides in Kingsley, Grand Traverse County. She and her siblings were raised in the village proper during the 1930s.

I’ve always wondered how my father’s family all ended up in Jackson when they were all born in Kingsley, but I do know that my father was nine years old when his mother died leaving eight children and it’s one of those questions you wish you knew the answer to and there is no one left to ask.

After the passing of his mother, my father lived for a year with Bob DeFrance and his wife in the Kingsley Hotel which is almost in my present back yard at 203 Fenton St. in Kingsley.  It is on the point where Brownson and Spring Streets come together. My dad said he planted asparagus in their garden which is just behind my garden now, and to this day some of the asparagus still comes up in the spring, so it’s like having a part of my dad around.

Mom was born in Mt Victory, Ohio on May 26, 1901. She met Dad in a Baptist church in Jackson, Michigan and they married on March 30, 1921, then moved to the village of Lake Ann, Michigan where my brother David, Sister Virginia and I were born. Because they lived in a rural part of Lake Ann, Mother held David back until it was time for Virginia to start school so he wouldn’t have to walk the mile and a half alone.

We lived across the road from the Bill Morse family, so Esther and Mom were such good friends.  Esther didn’t have a mean bone in her body, and she spent much of her life playing the piano at nursing homes along with her son, Bill Jr., who played an instrument too.  Even in old age she would kid about going and playing for the “old folk”.

When it was time for me to enter the world the doctor was nowhere to be found so Esther delivered me, and she always referred to me as her baby. The Morse’s were a wonderful family and we have remained friends to this day.

In the five year span between Virginia and me, Mother delivered a stillborn girl. Since she was born in March and Dad’s name was Fred, she was named Winifred. It wasn’t until 2009 while visiting Virginia in Florida that we got to wondering where she is buried. It seems so odd that we never questioned it while there was someone still around to ask.

When I was just a baby we moved to Kingsley and lived with my Grandpa, Peter Brautigam, on his farm on Sparling Road east of Blackman road, and the undated house is still there.  My mother never liked my grandfather because he was a boozer and when he had company he made her take us children into the parlor and keep us quiet.  He always favored me and was constantly disciplining David and Virginia; He would reach across the table and crack them across the knuckles with his table knife if he didn’t like what they were doing.

Marian was born on the farm and we moved into town shortly after that to a house on Fenton Street next door to the house that would later be the home I grew up in.  When Dad bought the house it was barely a skeleton. It was one of what everyone called “Parker’s old tin houses.”  They were sided with tin shingles as one can see from looking at the picture of what the house once looked like. You can see them on the top half of the house, but more on that house later.

My memories of the first house on Fenton Street, even though I was under five, are sparse but clear in my head.  We four kids slept upstairs in one big bedroom with two beds.  I slept with David, a sleepwalker, who took the blankets with him wherever he went.  He was famous for sleeping at the bottom of the stairs, and we used to get dressed behind a wood stove in the living room.

One of my memories of Marian at time was her sitting in a high chair asking for a donut. Mother told her if she took it she had to eat it. Well, she wouldn’t eat the donut so Mom sat her in the wood shed off the kitchen until she did. Marian was a problem from then on, it seems. She didn’t get along with other kids very well and the only one of us kids I remember who ever got a spanking.

Charlie Snyder lived in the big house next to the hotel and had a barn on Spring Street which is still there. He had cherry orchards and horses, and one day the horses got loose and ran down Fenton Street and into our driveway which is butted up to our house. Marian just happened to be in the driveway at that time and they knocked her down and scared the daylights out of all of us but fortunately she didn’t get hurt. It’s something you don’t forget!

Dad was a carpenter so he was able to restore the house next door. One of the first things he did was to close the open stairway.  He always maintained too much heat was lost going up open stairs. The house had two very large bedrooms upstairs and we had two beds each in them.

There were three small bedrooms on the main floor and he turned one into a bathroom eventually. He also took the partition out between the other two bedrooms making it one large one.  We moved into this house when I was five which is where Beverly was born when I was eleven and that completed our family of one boy and four girls. The night Beverly was born, we kids were herded away to some friend’s home to await her arrival.

We were a happy family and I have good memories, but one not so happy memory comes to mind as I think of the time we were going to Jackson to Grandma Alwine’s for Thanksgiving. In those days it was an all day trip. The morning we were to leave there was car trouble.  What a disappointment that was.  Bologna for dinner!

I loved my Grandma Alwine so much.  I remember the time when I was a young grade school student, we were visiting Grandma and when it came time to go home I wanted to stay. I made such a fuss that my parents decided to play a game with me. They supposedly left thinking I would change my mind when they drove away. I was a happy camper and it was with much distress when they drove around the block and came back for me.

My grandparents later retired to the North and bought a house on Wexford Corners one mile East of M-37 near Buckley. It was a happy time having them so close, but it had a sad ending.  Grandpa went to the basement to look for a gas leak and suddenly there was an explosion, and the living room floor fell right into the basement, plus it blew out the sides of the house. The paper stated that Grandpa lit a match to look for the leak but we know that is not true as he was always so cautious that way. He may have lit his pipe without thinking, but we will never know.   He was rushed to the hospital with his hands hanging out the window as the skin was burned off from them.  I don’t even know who drove him as it was before we arrived. Unfortunately his lungs were burned also, and he died two days later.

Grandma was never the same after that, so she moved back to Jackson to live with her daughter. Grandpa was 81 when he died and Grandma lived to 87.

There is so much more I could write but that will be another story.

Ready to share your family stories? Consider submitting them to Grand Traverse Journal! For information on submission, visit http://gtjournal.tadl.org/about/#submissions