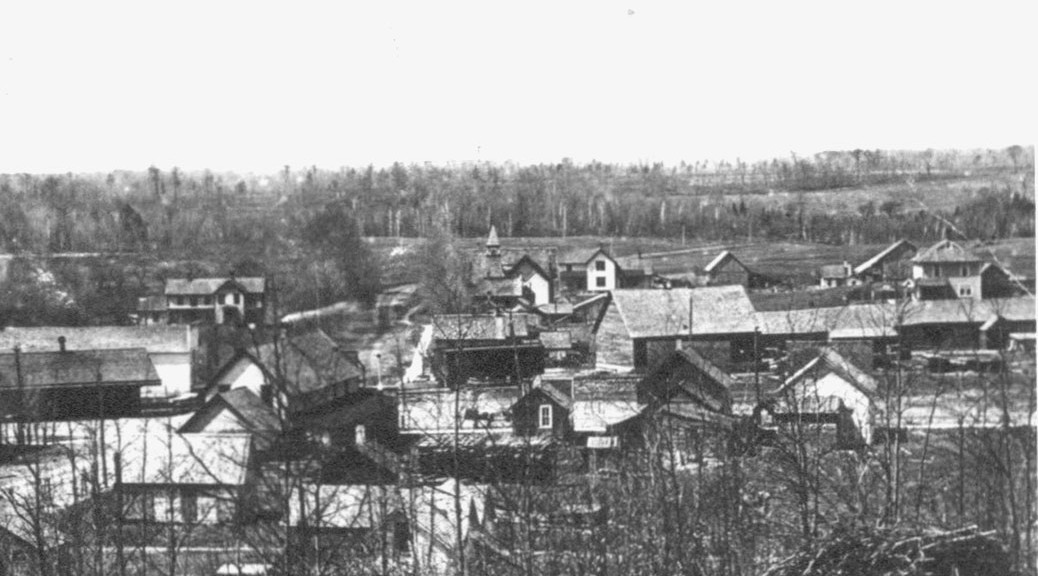 The Manistee and North Eastern Railroad (M. & N. E.  R. R.) played a large role in the formation of many towns along its route. It served the Grand Traverse region for nearly a half century, hauling logs, lumber, produce and people. For many years, 1892 to 1934, it connected Traverse City to Manistee and numerous towns in between.

The Manistee and North Eastern Railroad was organized in January 1887 at a meeting at the Buckley and Douglas Lumber Company in Manistee, Michigan. William Douglas and Edward Buckley were the principals behind the railroad. The M. and N.E. was to extend 75 miles from Manistee to Traverse City. The primary purpose of the railroad was to bring logs and lumber from northwestern Michigan to the big Buckley and Douglas saw mills in Manistee.

Construction started in spring of 1888 and had reached Onekama when the railroad opened for freight business in October 1888. Track laying continued northward, reaching Kaleva and Lemon Lake by April 1889 and Nesson City by September that year. Tracks were extended to Interlochen by June 1890.

At first there was no passenger service; the railroad, as planned, only hauled logs. The first passenger train on the M. & N.E. ran on January 6, 1889 as far as Bear Creek, a distance of 20 miles. The M & N E added a second engine in 1889, using it on the passenger service.

According to writer Margie Fromm, the train was: …impressive, with its green and red plush interior and newly painted wine exterior. The train consisted of the locomotive, one coach, and combination smoking and baggage car. Additional coaches were soon added.

The tracks reached Lake Ann in October 1890. Passenger service as well as log and freight hauling to Lake Ann started that year.  In many ways, the village of Lake Ann was typical of the interaction of the M & NE Railroad and the towns along its route. In some cases a town was created by the railroad but in all cases the towns grew with the coming of the rails.

The first depot in Lake Ann was quite rustic. A new station was soon built, just south of the main street, Maple Avenue, opening in May 1892. The station had a waiting room for passengers at one end, an office for the railroad agent and ticket window in the center, and a baggage and freight room and loading dock at the opposite end.

Overall, Buckley and Douglas built a first class railroad. At that time, most logging railroads were narrow gauge but Buckley and Douglas began with standard gauge tracks. In addition to quality passenger cars and depots, they used some of the heaviest rail then in use.

The Manistee Daily, in May 1899, described the railroad as follows: The Manistee & North Eastern is something unique in its way, as it is believed to be the only one of anything like its size, standard gauge, thoroughly built and equipped and operated after the manner of the larger lines with freight and passenger trains, express, mail, train dispatchers, own telegraph lines, etc.

To that Edward Buckley added, One [coach] is a first-class, 60-foot car that is equal to the best of the Chicago and West Michigan.

The large volume of timber available in the Lake Ann area delayed the expansion of the railroad. The tracks were not extended to Traverse City until June 1892.

Because the railroad terminated in Lake Ann for about two years, a turntable was built at the end of the line on the north side of the village. This allowed the engine to be turned around before making the return trip south. It was completed in December 1891.

Benzie Banner, Dec. 10, 1891:  The turn table is now in working order at the lake, and the awkwardness of running the trains backward is no longer a necessity.

The turntable was small, just long enough for the small locomotives. It was no doubt turned by human power; one man could do this by pushing a bar that extended beyond the end of the turntable.

It may have been removed when the M&NE tracks reached Traverse City in 1892 as it would no longer have been needed to turn locomotives.

Initially a siding was built in Lake Ann to serve the Habbler saw mill located on the lake shore. Later, as logging declined, agriculture became important. Potatoes, in particular, grew well in the sandy soil and became a major crop. Potatoes were brought by wagon to Lake Ann where they were sorted and loaded into boxcars.

Several sheds were located beside the M&NE tracks on the north side of the village. A large potato shed was most important. Photographs of the village, taken from the school hill, show boxcars beside the sheds.

In 1910 the Manistee and North Eastern Railroad was at its peak. It owned 355 miles of track, 15 steam locomotives, 2 snow plows and numerous other pieces of equipment.

Over the years, a number of branches were laid from the main line. A major line was extended north from Hatch’s Crossing to Northport and another from Solon to Provemont (now Lake Leelanau). A branch extended west from Platte River Junction (just south of Lake Ann) to Empire Junction. The last and longest, in 1910, ran from Kaleva to Grayling. It extended the life of the railroad by opening a large new area of prime timber.

At its peak in 1915, the M & NE carried 190,000 passengers. The coming of the automobile reduced the need for passenger service between towns. Ridership declined along with freight traffic, leading to the inevitable end of the Manistee and North Eastern Railroad.

As logging declined in the region, the volume of freight declined and the M & N E, like many railroads during World War I, fell on hard times.  In 1931, the Pere Marquette Railroad took control of the renamed Manistee and Northeastern Railway.

Gradually, segments of tracks were abandoned and service discontinued. By July 1934 the last freight train departed Lake Ann. The tracks between Kaleva and Solon were abandoned in 1934. The station in Traverse City was closed later that year and the railroad’s offices moved to those of the Pere Marquette Railroad.

The M & NE tracks were removed by October 1934. The Lake Ann depot was torn down about 1935 to make room for the new town hall.

Even though one could hop in an automobile and drive from town to town on a developing system of roads, the railroad was not far from people’s minds.  I suspect many people missed the excursion trains to Traverse City or Manistee, the shopping jaunts by the ladies, the business trips into the city by groups of men, or the fall hunting trains. The railroad was more than hauling lumber or produce: it could be a social occasion in its own right. In many ways the Manistee and North Eastern was missed by the people along its former route.

Even now, segments of the right of way can be followed by those willing to explore the fields and woods of the Grand Traverse region. There, one can reflect and imagine the sounds and smells of the steam locomotives of long ago.

For more detailed information – and some anecdotes – see the following references:

The Manistee & North Eastern Railroad,  Manistee Daily, May 1899. Available on the Internet.

The Manistee & Northeastern Railroad: The Life and Death of a Railroad, Donald Stroup, Historical Society of Michigan, 1964

4 thoughts on “Remembering the Golden Age of Railroads: The Manistee and North Eastern Railroad and its Grand Traverse connections”