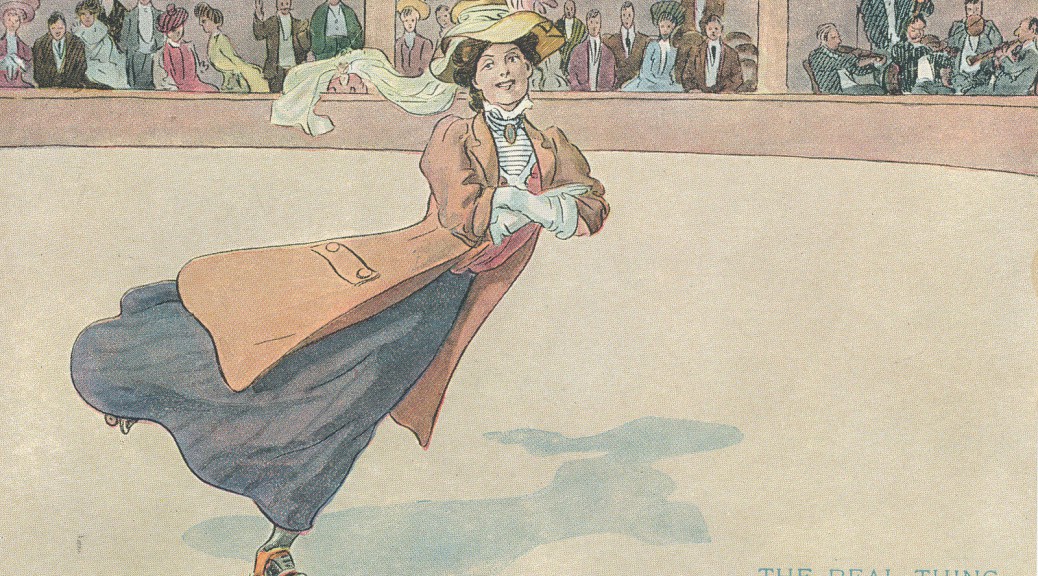 This article appeared in The Evening Record on March 13, 1906:

Many were on rollers

For three hours last evening 200 people shod on skates with slippery rollers fitted fore and aft, slewed, slipped, fell, tumbled and rolled upon the white solid flooring of the new auditorium to the tune of a grand march played by a twelve-piece band stationed in the corner far out of harms way. A general feeling of good will pervaded the atmosphere and if a sprawler insisted  on sprawling, friendly hands placed him on his feet or gathered him together and sat him gently down on seats provided. Sometimes the greater energy was expended in attempting to do nothing, or in other words, it more often took a greater amount of energy to stand still than it did to go some. As long as motion was kept up, direction didn’t count.

Roller skating, which will prove from now on to be the popular sport of the city as it has become a fad throughout the country, is exhilarating and easily accomplished. There were many in attendance last evening who had had previous instruction in the art and those materially assisted the new recruits.

Some of the beginners, however, showed remarkable proficiency.  “Mickey” McManus felt at home as soon as he got on the rollers and did some fancy skating which was looked upon with wonder by those whose feet wouldn’t stay where they put them. Andy Hermuth gave some high dive exhibitions which were greatly appreciated. As soon as every one had laughter at him until they were tired, he straightened up and skated as well as he pleased. The rollers got even in the end, though, by depositing him in a graceful heap. Jens Petersen was also new to the game but after a little practice in the corner got along so well that in a short time he was able to skate backwards. W.W. Fairchild said that he was a beginner but didn’t skate like it. John Ashton no more than got them on until he was at home as much as though he were on ice, while Don Cameron also did it very gracefully. Ben Montague had some difficulty with a number of the turns, but before the gong rang for 10 o’clock was an old hand. Pete Nay and Mart Winnie joined forces and between the two managed to conquer the pesky things. Frank Meads was very busy during the evening and found some surprises but didn’t make any holes in the floor. Albert Haskell was among the graceful ones and Dell Schuter did so well that he held a place as an assistant instructor.

There were a number of ladies on the floor, part of the time, the rest of the time they were on their feet. For the most part, they picked up the art very readily and among the crowd on the floor, there were several that vied with the sterner sex for the honors. Some, however, described many gymnastic evolutions before they managed to conquer their slippery steeds and many, after they had shed their skates, still walked as though they were on rollers.

It is announced that Thursday afternoon will be reserved for ladies while a Saturday morning from 9:30 till 11:30 will be given over to children who are not allowed in the auditorium during any other session during the week.

Thanks to Julie Schopieray for submitting this article for republication in Forgotten Stories. Schopieray is a regular contributor to GTJ.