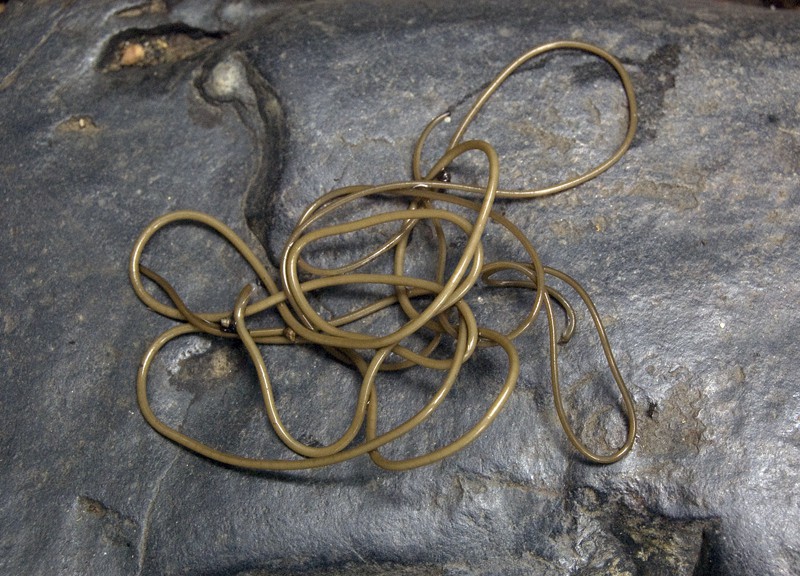 In late summer in puddles, bird baths, pools, and even wet grass a long, thin writhing worm can sometimes be found, often coiling in extravagant knots, that behavior explaining one of its names, the gordian worm.  As some readers may remember from school, Alexander the Great was confronted with the Gordian knot, having been told whoever untied it would rule the known world.  After a few futile attempts he simply took out his sword and whacked it in two, presumably showing his contempt for that story.

Perhaps not as intricate as the real Gordian knot, the Gordian worm nevertheless displays a formidable tangle, its length sometimes stretching to 36 inches or  more.  It may be iridescent white if it has recently appeared, but rapidly turns a dark brown as time passes.  For this reason—it takes on a more horsey hue–it is given another name, horsehair worm, perhaps in the mistaken belief that it originates from horses come to drink at watering troughs.  In fact, it is associated not with horses  at all, but with beetles, crickets, and grasshoppers.

Horsehair worms are common parasites of those insects.  One summer long ago I participated in an informal survey of the grasshopper population to determine the rate of infection.  Upon examination fully one grasshopper out of twenty harbored the tightly coiled worm, a death sentence for it as sure as the dissecting scissors that exposed its fellow traveler.

One question about the worm is unanswered: how do the parasites know when the insect is close to water?  If it emerges in a dry hot place, it will surely shrivel in the sun.  Somehow it must induce thirst in the grasshopper, driving it to approach water to drink.  Does it control its host zombie-style, depriving it of its own grasshopper consciousness?  Perhaps—and the image is strangely disturbing.

Upon emerging from its host the horsehair worm spends time in or near its body of water, eventually finding a relatively warm place to spend the winter.  As waters warm in spring, the female worm sheds as many as 27 million eggs into the water, many of which are fertilized by the male as he passes over them.  The young larvae creep along the bottom of their watery homes, seeking passage to the body of a cricket, grasshopper or beetle.  The lucky ones hitch a ride in an aquatic insect, a larval cranefly, black fly, or dragonfly, perhaps.  They form cysts within the those insects, wait for them to transform into adult winged forms, and ride out of the aquatic environment to a terrestrial one, a place where their host insects dwell.  Leaving their “transportation host” after a rain or on a dewy morning, they wait for a hapless grasshopper or cricket passer-by.  If good fortune allows them to be taken into the insect’s body, they bore through the animal’s gut and take up residence in the abdomen of its body, thereby completing its life cycle.

We should not hate horsehair worms.  If they destroy one out of every twenty grasshoppers, surely they must save untold numbers of plants from being consumed by voracious insects.  Even if their life cycle is not pretty, they provide a service for us.  Even superficially repulsive wriggling worms have their place in Nature.

2 thoughts on “Horsehair worms: A Nightmare of Grasshoppers and Crickets”