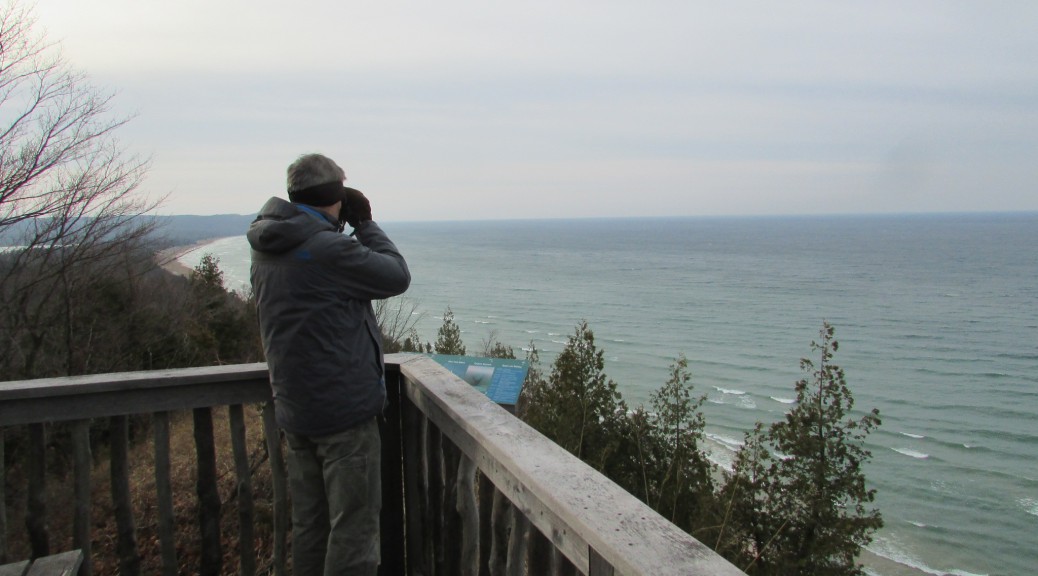 From the perch on Green Point, a wide expanse of Lake Michigan to the South and West stretches as far as the eye can see. It would seem to be the prime spot for the Christmas Bird Count. But this year there are few birds to be spotted–so few that Brian Allen said that he is going to Peru where there are lots of birds to see.

The Christmas Bird Count was started in the year 1900 by Frank Chapman. At the time it was the custom to engage in side hunts, a sort of competition to see who could shoot the most birds; Except for this custom falling to the wayside, little else has changed in how the count is recorded between then and now. Chapman founded Bird Lore, a publication that listed the first Christmas Bird Count (later the Count was moved to the Audubon Magazine). Copies of Bird Lore are available to view and download through the Biodiversity Heritage Library.

The Audubon Society organizes the effort each year to count rather than shoot birds. The results are compiled and published on the Audubon Website. Thousands of groups across the country meet in the field around Christmas to count avian species. There are others who stay at home and keep note of the kinds and numbers of birds they see at their backyard bird feeders. In 2013 there were 71,531 people that participated in the Audubon Christmas Bird count. There were 2,369 locations in the Western Hemisphere. Each location has a compiler.

I joined the Benzie Audubon group for the 2015 Christmas Bird Count.  Brian Allen was the leader  of one of eight field groups spotting in the Western Region of Benzie County December 21, 2015. As with all the Christmas Bird Count groups across the country we would count all the birds we could spot in a fifteen mile circle. The Benzie Audubon compilers are John Ester & Carl Freeman.

Compilers create reports, noting weather, temperature, and other variables that may affect bird viewing, like this one provided by Ester for the Benzie group: “Again this year our count was blessed with good weather. The day started with clear skies, meaning cold temperatures but a gorgeous sunrise. By afternoon we were in the mid-forties and up. The warm weather meant lots of open water and plenty of natural food. Perhaps for this reason birds were in shorter supply–we saw 3,673 individual birds, as opposed to 5,205 last year. But our 35 observers (25 in the field, 10 at home) saw a respectable 59 species on count day, plus two more as ‘count week’ species.”

Allen and I had a portion of the circle South of Betsy Bay along Lake Michigan. Our area included Upper and Lower Herring Lakes. Armed with binoculars and a clip board we stopped at a number of different locations. The variety of habitats we trekked included beach, woods, stream, field, and lake. Year after year some of the same birds can be seen in each of these habitats.

We finished in time to attend the Benzie Audubon potluck where the species were read out loud.   Our total was 21 bird species, making the trip to Peru unnecessary.