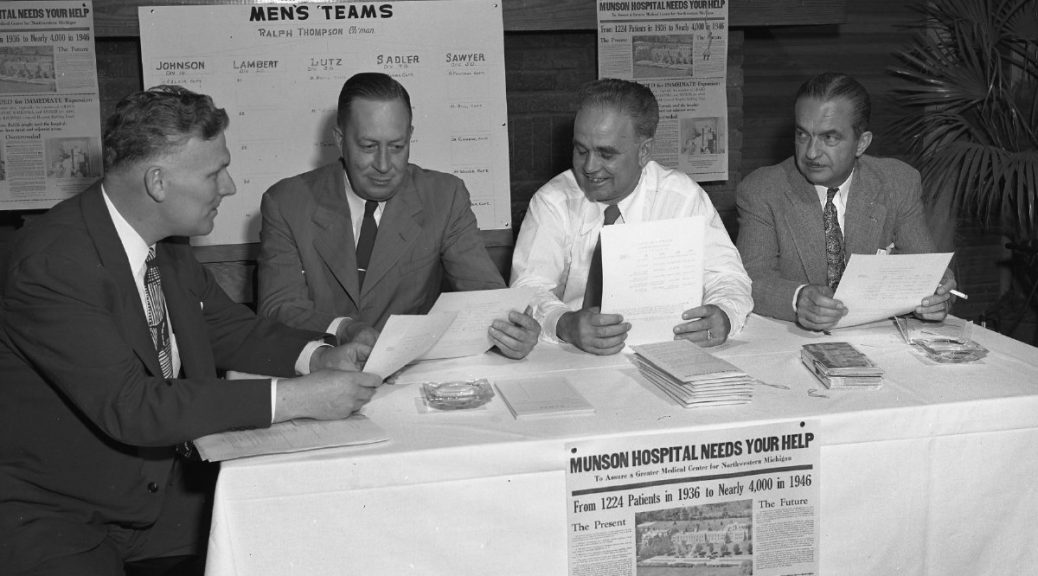 Recently, a new patron asked me: What kinds of questions do you get at the Traverse Area District Library reference desk?

Sure, we get the usual readers advisory questions, and lots of questions on how to access our digital resources, and occasionally we get asked for advice on where to get dinner. But what really brings in the questions? When construction is happening. It doesn’t matter if we’re talking new construction, rehabilitation, or road repairs. There is nothing that piques our patrons’ curiosity than watching something get built.

So, what’s happening in Traverse City that the people are curious about? The revamp of the Murchie Bridge over the Boardman River on West Grand Traverse Bay has brought in the most interest, so let’s dive into a few of the most common questions!

Robert Burns Murchie was a Traverse City native, born on October 25, 1894. He was the son of Mary Krouse (d. 1909) and James Murchie (d. 1936). He was a graduate of Traverse City High School, class of 1912, and he earned his law degree from the University of Michigan in 1917.  He served during World War I, and spent nine months in France, and upon his return, married Lulu A. Cole of Detroit. After practicing law from 1919 to 1934 in Detroit, Murchie moved back to Traverse City, where he was a senior member of the law firm of Murchie, Calcutt and Son- dee.

Why does he get his own bridge? Did he pay for it?

Although Murchie probably ponied up a few of his own dollars, he earned that bridge through his civic engagement. Among his many endeavors, he served as chairman of the Traverse City Chamber of Commerce Shorefront Committee, responsible for the location and construction of Grandview Parkway.

In 1941, Murchie told the story of how he decided that Traverse City needed the Parkway, in an article published in the Traverse City Record-Eagle. As a child, Lil’ Bobby wished to get to the beach on Grand Traverse Bay (newly reclaimed from industrial waste, thanks to the efforts of Con Foster and the community), but to do so, he had to pick his way across the Pennsylvania Railroad track. The track was littered with sharp little cinders, left behind by the trains.

His poor little feet! One day, a particular cinder lodged itself between his toes, and Lil’ Bobby exploded, “By golly, when I grow up I’m going to get this old railroad out of here and make a park for kids!”

When Murchie returned to Traverse City in 1934, he was struck anew by the beauty of the bay. Recalling his tender young feet so abused, he vowed that the railroad track would no longer plague beachgoers. After several years of work, plans were drawn for the Grandview Parkway, to the tune of $250,000.

So that’s it? He served on ONE committee? Big deal.

I didn’t know Murchie myself, so I will need to rely on his obituary to answer this one. Murchie was much more involved in Traverse City than just the Shorefront Committee. He served as president of the Traverse City Chamber of Commerce in 1938, Traverse City Rotary Club in 1939-40, and Grand Traverse – Leelanau – Antrim Bar Association in 1961.

He was co-chairman of a three-man committee responsible for the success of the original campaign for funds with which Munson Medical Center was organized and constructed independently of Traverse City State Hospital; and was chairman of the committees organized to promote the establishment of an Air Force jet base in this area.

Hm, pretty busy guy! I guess he can have a bridge named after him.

Not that we were looking to change the name, but we appreciate your support. So, here’s to Robert Burns Murchie, and his tender feet. May we all travel a little safer (and with better scenery), thanks to his work!

Care to learn more about the beautification of the Grand Traverse Bay waterfront? Check out Richard Fidler’s books, Glimpses of Grand Traverse Past: Reflections on a Local History, and Traverse City, Michigan, 1850-2013. Both of these titles are available for checkout at Traverse Area District Library.