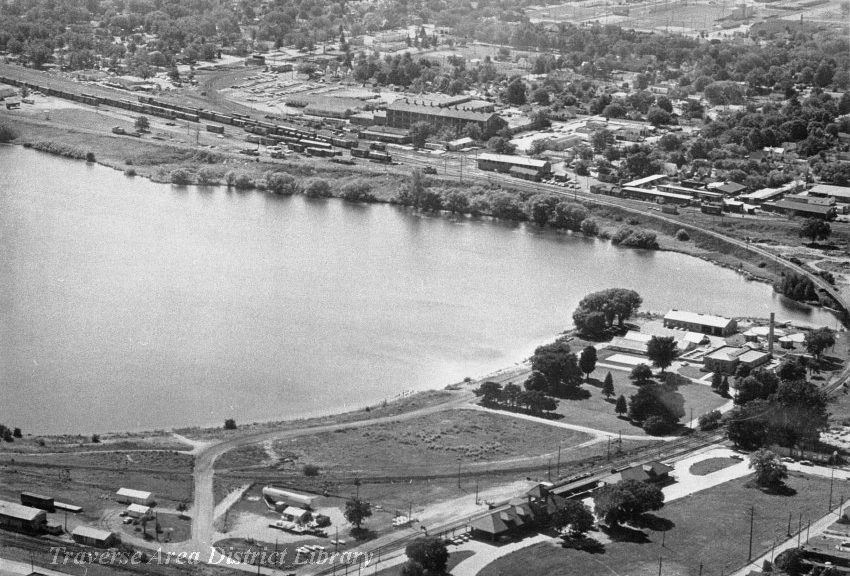 If we could take snapshots of Boardman Lake over the past 160 years, we would see not just one lake, but many of them, each serving a different purpose for the community.  In this collection of photographs taken from the Historical Society’s collection at the Traverse Area District Library, we can explore the transformations of this body of water over time right up to the present day.

The lake has always been fished, even before the arrival of white settlers.  One of the first accounts of ice fishing was presented in the Grand Traverse Herald nearly 150 years ago:

The Indians are now engaged in fishing for them [lake trout].  They cut a hole through the ice, cover it with evergreen boughs, throw in an artificial decoy fish attached to a line, throw themselves flat upon their faces, and, with spear in hand, watch the approach of the unsuspecting trout to the decoy, when, quick as lightning, the spear is thrust, and a ten or twenty pound trout is floundering on the ice.

The lake is not an artifact of dam building, but is a natural feature of the land.  It was drawn onto the earliest surveyors’ maps, though was somewhat smaller than it presently is today.  The Union Street dam, constructed in 1869, raised its level about three feet.  Because a river runs through it, plumb bobs don’t drop perpendicularly to the bottom to measure depth.  Perhaps that is why it was considered literally bottomless by early settlers.  In fact, at its deepest, it is only about 70 feet deep, though who can tell how much sedimentation has occurred since its depth was first measured?

The first transformation of the lake occurred with the advent of logging.  Logs were piled along the banks in winter to await the thaw.  When the ice had melted, they were rolled into the water to proceed downriver to the waiting sawmill at the river’s mouth on West Bay.  Located on the west side of the lake, this “rollaway” was one of many along northern Michigan rivers.

Next, industry transformed the lake.  The Oval Wood Dish Company was the largest factory to be located on the lake: in fact, during its existence, it was the largest employer in town, hiring more than 600 workers at its peak.  Besides oval wood dishes (used in packaging meats and other products), it made clothespins, wood flooring, and all kinds of items made from hardwood.  Because local hardwoods had mostly been logged off, it moved to the state of New York in 1917 in order to take advantage of forests in that state.  Other factories along the lake sawed wood for lumber, made chairs, fruit baskets, hardwood flooring, and, somewhat later, automobiles.  The Napolean auto company, located at the far north end, manufactured small cars and trucks for a few years in the 1920’s.  The industrial nature of the area was reinforced when the city determined that the sewage treatment plant would be located at the far north end, this facility constructed in 1931.

At the same time industrialization was changing Boardman lake, townspeople began to see it as a place to play.  Poplar point was picnic area located well south of the present library.  It could be reached by launch on summer days in the early 1900’s, the boarding point being near the intersection of Boardman Avenue and Eighth Street.  In the winter, the lake froze solid, so that skaters could get out and enjoy the ice—which formed earlier than that on the Bay and was usually smoother, better for skating.  Bicycling, the rage in the 1890’s, still attracts hundreds of those using bike paths.  Hull Park has become a major recreation center for the area with its sailing club, children’s garden at the public library, picnic areas, and scenic spots perfect for fishing or contemplation.

Before refrigeration had caught on—and even afterwards—ice was cut out of the lake to be preserved in sawdust until summer.  Up to the 1940’s it was sawn into blocks and kept in icehouses along the shore to wait the hot days of July.

Finally, in recent years the lake has become a place to live.  Condos and assisted living facilities stand on both the east and west side of the lake.  More such developments are planned along the edge of the lake along with a walking/bike path that circles the body of water entirely.  The lake is being transformed as we watch, and will, no doubt, transform itself again–as it always has.