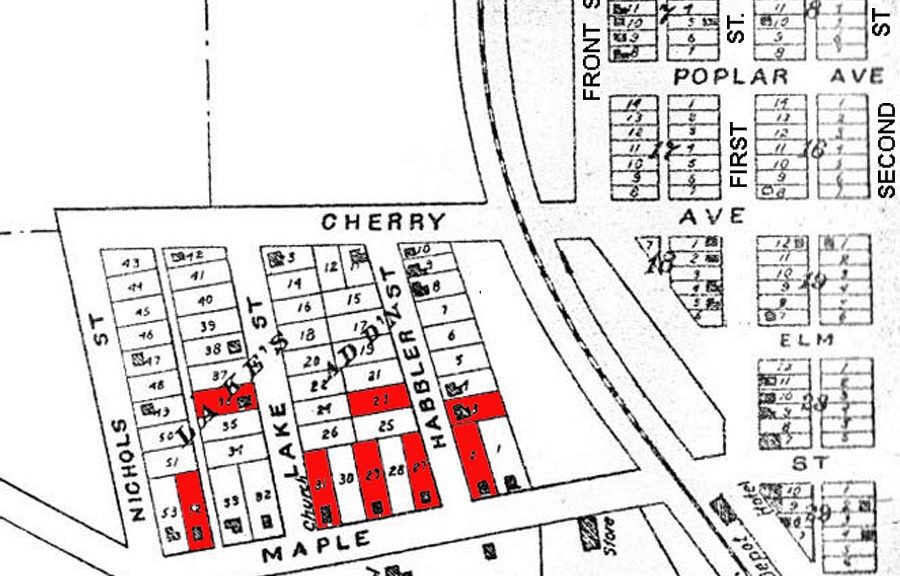 April 11th is the anniversary of Lake Ann’s third and final “big fire.”  Like many of the logging towns in northern Michigan, fire was a constant threat in Lake Ann. Piles of logs, stacks of lumber, sparks from steam engines and fires associated with saw mills, added to closely spaced homes and businesses of wood frame almost invited disastrous conflagrations.

The village of Lake Ann suffered three major fires in its early history. The first, and most disastrous, struck on July 4th, 1897 and burned nearly the entire city. This fire began in the large saw mill, owned by William Habbeler, on the lake shore.

The mill was rebuilt but much of the city was not. Lake Ann’s population prior to the fire was about a thousand. After the fire it was merely in the hundreds.

The second fire, in 1902, burned the business district which was much smaller than it was in 1897. Businesses occupied an area much like that of today.

The third fire, April 11, 1918, burned the Congregational Church, several nearby homes and William Habbeler’s mill. This mill was smaller than the original mill on the lake shore and apparently made barrel staves and headers, which would explain the designation “the old cooperage” in the account of the fire.

A dramatic account of the 1918 fire was published in the April 12th edition of the Traverse City Record-Eagle. The article began, “Half the village of Lake Ann lies in charred ruins today, the result of a fire yesterday afternoon, that swept its course, leveling ten dwellings, the Congregational Church, three barns and the old cooperage.”

In 1889, following the first big fire, William Habbeler purchased a second mill, located just northwest of the village. Perhaps he reasoned that this mill, located far from town, in a large open field, would not start another disastrous fire.

The third fire started in the Alex Frazer residence, apparently from a defective chimney. A high northeast wind was howling and sparks and flames from the dwelling were carried to the next. Dwellings of the following residents were destroyed: Alex Frazer, Mrs. O. Morton, William Habbeler, Dave Henry, Mrs. George Tyler, L.O. McFann, Charles Warner, and three homes belonging to M. L. Lake. This was the third time the home of William Habbeler was destroyed by fire.

Two endangered other nearby structures were saved by heroic action of the village residents. The Schneider home was in the direct path of the westward spreading fire. Men climbed on the roof and poured buckets of water, passed up to them, on the roof. They were able to keep it wet and safe from blowing sparks and embers.

Likewise, across the main road, Kate Decker Dohm, resident housekeeper for many years, kept the roof of the Dohm Resort wet. Kate was related to Merrill Lake, who built the Lake Hotel about 1892, and served as his housekeeper. She inherited the hotel, married Henry Dohm and continued to work at the new resort.

The saw mills and grist mill are long gone but today the village of Lake Ann is a vibrant, thriving place. New businesses include a brewery and a coffee shop. As generations pass, memories of the three serious fires are fading but Lake Ann certainly is not.

Revised Map of Buildings Destroyed in the 1918 Fire:

Half  the  village  of  Lake  Ann  lies In charred ruins today, the result of a fire yesterday afternoon,  that swept its course, leveling ten dwellings, the Congregational Church, three barns and the old cooperage.  Nor did the flames stop their ravaging  work until

every particle of inflammable material in their path had been consumed.

The fire started in the A. Frazer residence, apparently from a defective chimney.  Flames were not discovered until the fire was too well under-way that the roof was ready to fall in.

A high northeast wind was howling and sparks and flames from the dwelling were carried to the next, and from that, on westward  through  the town.

Bucket brigades were formed, and farmers, who drove in from miles

around, lent their assistance in battling the fire, but to no avail. The fire did not stop until it had exhausted the material, and the balance of the city was spared only because the wild wind did not change.

The Congregational Church was completely destroyed, along with the old cooperage and three barns. Portions of furniture and household goods were saved from some of the dwellings,

being removed when it became apparent that the houses were doomed. The C. L. Foster store was saved.

Whether or not Lake Ann will be rebuilt is unknown. This is the third time the town has been virtually destroyed by fire, one about 20 years ago, once in 1907 (sic – 1902). Each time the place has come up out of the ruins, smaller than before being ravaged by fire.

William Habbler, one of Lake Ann’s substantial citizens, whose home was lost, is in Ohio on business and nothing will be known as to his plans for the future until his return.