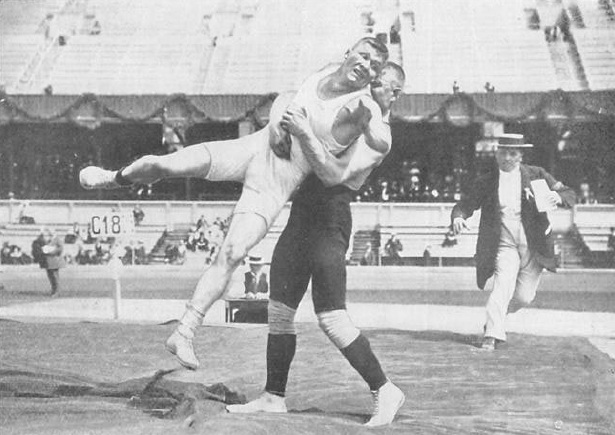 What follows is an account of professional wrestling and boxing arriving in Traverse City in 1908 from the Traverse City Evening Record.  At that time,  150 pound wrestlers had a place in the sport!:

As the men stepped into the mat and touched hands, almost immediately they were locked in a full nelson, which Frank Burns gradually worked into a half nelson.  This round lasted 14 minutes and 50 seconds.  Frank Burns dropped to his knees and Joe Burns clinching him four times with his famous crotch and wrist hold, which, however, he was unable to continue, his opponent wriggling out of his grip.  The men gradually worked to the edge of the mat and Referee Henry forced them to take the center of the mat each time, taking the same positions.  Each man seemed to think the other one responsible for the working toward the mat, but they willingly obeyed the referee.

A little sparring was indulged in during this round, which seemed to the spectators an attempt to each man to bring on an attack by the other. Watching his game and a chance to grapple his opponent.  Although it is almost impossible in a well-matched team to foretell the outcome of a wrestling match, it looked at first as though Joe Burns might win with his wrist and crotch hold.  Frank Burns, however, gradually worked his man into a half nelson, and assisted by a combined roll and barlock held him down to the floor and time was called.

After an intermission of 10 minutes the men again met, but this round was finished in 2 minutes and 5 seconds, Joe Burns showing fatigue and Frank Burns seemingly good for twice the work he had already accomplished.  Frank had Joe in a half nelson and body hold, which he worked into a double nelson from the front, and gradually bore him to the mat, amid the loud applause of the spectators.

Referee Earl Henry, in introducing the wrestlers, stated that in professional wrestling no strangle holds were allowed and in the contest none were attempted.  It was good clean sport throughout, and the contest was watched with intense interest, even the gallery gods being too much interested in the outcome to show any uneasiness or disorder whatever.  There were times when the dropping of a pin could have been heard in the house.

When interviewed after the contest for a Record reporter, Joe Burns stated that he was not in condition to win, although he had been sanguine of the outcome being in his favor had he been able to have worked his famous wrist and crotch hold on his opponent.  Both men were weighted before stepping onto the mat.  Frank Burns tipping the scales at 150 pounds and Joe weighing 162.5.

“My weight was against me, “ said Joe Burns.  “My normal weight is 145, but I had not been able to reduce to normal weight.  Consequently I tired easier than I would had I been to proper condition.”

When asked what the hold was that Frank had won from him the championship, he said: “I don’t know what he calls it.  I have been in the business for 14 years and have never yet been in a grip like that.”  When told that it was called a double nelson from the front, he acknowledged that it might have been that from the front, but he was not in a position to see what it was.

However he was well satisfied with Referee Henry and believed that everything was clear and above ground.  He had no complaint to make whatever.  Before the game he stated that he would either win or lose in 5 minutes as he realized his overweight would not permit him to continue the contest much longer.

Previous in the contest,  Manager John Blacken read a letter from Ed Conley of Napoleon, Ohio, in which he challenged the winner of the Frank Burns-Joe Burns contest agreeing to throw the winner two falls in one hour for any amount of money they would put up.  Conley stated that a traveling man had given him the names.

Two boxing contests were put on as preliminaries, the first being between Fred Gokeu, the “Cuban Wonder,” and Bluy Griffin, “The Stockyards Champion,”  the Cuban Wonder winning the honors of this bout.

Gokey was not at all aggressive and was content to let the other fellow make the attacks, which he succeeded in staving off, giving Griff a bloody nose.  Gokey was free and easy throughout the contest, and swatted his opponent apparently with little effort, but with effect.

The second contest was between Lou Harkness and Billy Floyd, in which the honors went to Harkness., Floyd receiving a bloody nose in this contest.  Harkness had the advantage in being the taller of the two, but his opponent was adept in dodging , but could not escape the long arms of Harkness who landed a few on his nose, which bled profusely.

Both these contests were watched with interest by the spectators and their efforts were received with hearty applause.

As the wrestling match is the first professional match that has been carried off in this city for about 10 years, it was not expected that the interest manifested by those who were present is indicative of the character of the performance.  The sporting blood of Traverse City received a quickening, and it is probable that this is the beginning of a revival of similar affairs.  Frank Burns is planning to remain in the city this winter and no doubt there will be many such contests during the coming year.

A number of ladies in the audience last night watched the performance with interest, and had it been more generally known that ladies would be present, there would have been many more in attendance.  There was nothing in the affair to offend the most refined tastes, and the few ladies who attended evinced as much pleasure as their gentlemen friend.