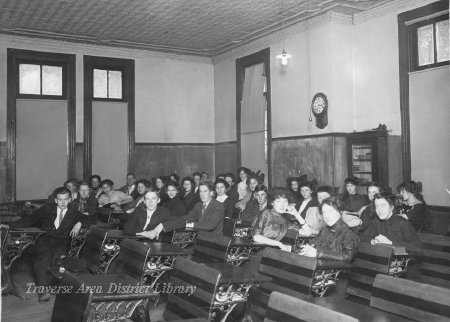 Looking at examinations given a hundred years ago or more, most people gasp at the complexity of the questions and wonder how present-day students would do if presented with the same challenges.  At the same time, they wonder how children a hundred years ago would fare on modern assessments.  Below are samples of test items from eighth grade tests in mathematics and reading, the questions taken from a graduation test administered in 1919 and from a recent set of practice questions offered by the Michigan Department of Education in the second decade of the 21st century.

Here is a segment of a test in 8th grade arithmetic, given to all eighth graders in Michigan in 1919.

What follows is the 1919 test in reading given to all Michigan eighth graders.

Behind him lay the gray Azores,
Behind the Gates of Hercules;
Before him not the ghost of shores,
Before him only shoreless seas.

“My men grow mutinous day by day;
My men grow ghastly wan and weak.”
The stout mate thought of home; a spray
Of salt wave washed his swarthy cheek.

They sailed and sailed, as winds might blow,
Until at last the blanched mate said:
“Why, now not even God would know
Should I and all my men fall dead.

These very winds forget their way,
For God from these dead seas is gone.
Now speak, brave Admiral, speak and say” —
He said, “Sail on! sail on! and on!”

They sailed. They sailed. Then spake the mate:
“This mad sea shows his teeth tonight.
He curls his lip, he lies in wait,
With lifted teeth, as if to bite!

Then pale and worn, he kept his deck,
And peered through darkness. Ah, that night
Of all dark nights! And then a speck —
A light! a light! at last a light!

It grew, a starlit flag unfurled!
It grew to be Time’s burst of dawn.
He gained a world; he gave that world
Its grandest lesson: “On! sail on!”

Below is a sample item from the current MDE test in reading, given to all Michigan eighth graders . One obvious difference between old and modern tests is the format.  Older tests ask students to write out answers, while modern ones ask them to choose the right answer from four choices.   A hundred years ago, students were asked to write and calculate on test paper, while today they are primarily tasked with filling in bubbles on machine-graded tests.

Another difference, not apparent here, is the way the tests are administered.  Until recently, students had to give answers with pencils and on paper.  Now, they do the tests online, though they are allowed paper for figuring and planning.  In a recent year, ninety-eight percent of students taking Michigan assessments read items on screens rather than on paper.  The change-over from paper-and-pencil is nearly complete.

Lest we imagine that modern tests demand less in thinking and reasoning, it is the older tests that require students to memorize such facts as the number of yards in rod, for example.  Memorization plays a small role in modern mathematics tests.

Both mathematics tests are skills-based: that is, they both ask students to DO something, rather than produce a right answer through memorization.  The skills required are different, however.  The early test asks students to demonstrate mastery of practical problems through calculation and reasoning, while the later test asks them to demonstrate a mastery of mathematical principles together with the jargon associated with them: a system of linear equations, translation and reflection, an infinite number of solutions.  Modern mathematics education is about addressing the foundations of mathematics with a certain amount of rigor.

A modern reading test shows a similar emphasis on mastering reading skills that go beyond understanding basic content.  Not reprinted here, one example set of questions begins with a 1000 word excerpt from a published biography of Ansel Adams, the photographer.  After reading it, students are asked broad questions about the theme of the piece and the author’s purpose, asking them to supply evidence to support their answer choices.  In the question printed above, students are not simply asked to define words, but are required to insert rough synonyms into a sentence to see if they express the same meaning.  Always, an effort is made to avoid memorization.

By contrast, the old reading test, requires less reading in the first place.  It apparently allows students to work on questions on their own, since they are told to give a biographical sketch of the author of the poem, Columbus, and to locate geographical places mentioned in the poem.  Such a thing would not be permitted in a modern test.

Subjects tested in eighth grade have changed, too.  In 2018-19, the Michigan Department of Education tests mathematics and language arts every year 3-8, and science and social studies in grades 5, 8, and 11.   Unlike in former times, an emphasis is placed on extracting information from graphs, interpreting text, identifying supporting evidence for conclusions, and applying concepts to new situations.  Older tests value content and memorization: the directive to write from memory a stanza of the poem Columbus reminds us of this fact.

The 1919 test administered to eighth graders in Michigan examined far more areas than modern tests do. Sections of the test included agriculture, arithmetic, mental arithmetic, civil government (county, state, and local), geography (world and national), grammar, orthography (word usage), spelling, penmanship, physiology (mostly health and the human body), and history (national).  To be fair, modern reading tests do not neglect grammar, orthography, or spelling, though less emphasis may be placed on any of these areas.  Also, a section of the present MDE assessment includes a writing sample to be graded on elements of style, grammar, spelling, and composition.

In recent years the writing portion has been greatly reduced in an effort to shorten the time spent in testing.   Teachers felt the test took too much time to administer, five and three-quarters hours.  We do not know how long it took for students in 1919 to finish all components of their exam, but it is likely it took considerably more time than that.  Then as now, questions would be asked over the course of several days.

In summary, what are the fundamental differences between the tests of today and those of a hundred years ago?  First, older tests emphasized practical learning—learning that helped students get along in the world they occupied.  For the majority, eighth would be the last grade they would complete.  They needed to know how to grow carrots, how to find percentages, how to do mental math, how to participate in local, state, and national government.  At the same time, they were tasked with memorizing the nations that bordered the Atlantic Ocean, the bad effects of brushing your teeth in the wrong way, and identifying parts of speech in complex sentences.  The curriculum was a tangle of questions that prepared students for the “real world” to come as well as those that had little discernable value in later life.

Modern tests in both English and Mathematics focus on skills that are supposed to be related to those asked for in the “real world”, though students may rightfully ask whose “real world” they are being prepared for.  Tests with questions about solving equations with an infinite number of solutions do not connect with the lived experience of most people.  Analysis of a reading passage designed to get students to provide evidence that the author was attempting to accomplish a certain goal in her writing does not connect to the reading many of them will do in their lives.  An investigation in science could have “real world” relevance to students, but the jargon that accompanies it—testing hypotheses, forming models—may not be necessary for explorations they engage in later on in life.

Which test is harder?  It is impossible to say.  Today’s students would not be prepared to memorize items that everyone years ago expected them to know.  On the other hand, students from long ago would be confused by the questions asked now and by the way tests are administered.  A modern test requires hours of work teaching children how to take the test.  Indeed, state assessments have been criticized for the reason that they warp the educational process such that schools end up serving assessment goals, rather than providing learning experiences that broaden and enrich the lives of students.   What gets tested gets done in the classroom; what is not—often those enriching experiences that exist outside of formal instruction and textbooks—is sacrificed on the altar of higher test scores.

That is not to say we should return to testing as it was done in 1919.  Neither students nor educators were entirely pleased with that program—witness the move to make changes in the decades to come.  For a time, beginning in the thirties and continuing through the nineties, summative testing, the kind that makes final judgments about how much a student has learned, fell out of favor.  The purpose of testing was primarily to help teachers and schools figure out how to educate students better.  It was not used as a means to rank students, teacher performance, schools, districts, states or countries.  Perhaps that is the biggest change in school testing: the purpose of testing has changed.  It is still a question whether that change has been good for students, schools, and the wider community.