Chicago, where most of our summer tourists hailed from during the era of the Lake Michigan passenger steamers, 1840-1920, “was distinctly not a lovable place.” The Chicago River in particular was notoriously odorous, a product of having a negligible current and a shallow, marshy disposition, exacerbated by the development of industry in the city and the traffic from steamer ships. What better way to escape the city, than to hop a luxury steamer up to Charlevoix, Michigan? (Hilton, 127)

As the weather turned cool, the tourists returned on those same steamers back to Chicago. Until the advent of reliable roads and vehicles, only those who braved Northern Michigan year-round had the pleasure of fall, that beautiful and fleeting season of riotous color. Although we would hardly call the roads “reliable” by today’s standards, the carriage road from Traverse City to Elk Rapids of 1898 was one means of enjoying a ride through fall color.

This excerpt, from the Northern Michigan Handbook for Traveler’s, depicts the route with a degree of accuracy, but the charm of the writing is what distinguishes this work from modern travel guides. Perhaps it will inspire you to take the northern color tour this year?:

The trip from Traverse City to Elk Rapids may be made by carriage road and will afford a pleasant drive or bicycle ride. The road is, in general, in good condition and for many long stretches very fine. It is somewhat hilly in the central portion, the hills being long but not steep. The distance is eighteen miles and many fine views are to be enjoyed.

Crossing the Old Mission peninsula, the road follows along the bay immediately above the railroad, which it crosses at Acme (4 miles). From this point it runs nearly due north, with occasional glimpses of the lake, through a fine farming country passing (about 13 miles) a little lake on the right known as Lake Pto-ba-go (Note: now Petobago Pond, part of the Grand Traverse Regional Land Conservancy). Soon we climb a hill whose crest reveals a fine expanse of lake and shore line. The character of the country from this point begins to show a marked change. Long and beautiful hedges of spruce and fir, wide “openings” adorned with the low, flaring and circular juniper – a shrub or bush of the evergreen family – and exquisite copses of small pines take the place of fields and farms. The road is from this point (for five miles), to Elk Rapids, exceptionally fine and the whole scene is one of wild, romantic beauty and delightful interest to the visitor. (Note: the next 4 paragraphs describe taking the route north by boat through various lakes and rivers; we have edited out that text to maintain the land conveyance).

…From Elk Rapids bicyclers may continue the journey to Charlevoix, following due north between Torch Lake and Grand Traverse Bay to the village of Torch Lake (about 13 miles); hence north to the extremity of Torch Lake to Eastport (3 miles); hence due north eight miles, passing the little town of Atwood, five miles from Eastport. From this point the road travels in angular direction northeast, nine miles to Charlevoix. While the journey may be readily made, the road can not be called first class and the bicyclist must be prepared to do some hard riding.

Why so far north for a History Road Trip, when you can run up one of the Peninsulas? Prepare yourself for the long-haul past Harbor Springs to the “Tunnel of Trees Scenic Heritage Route,” or M-119. Just north of Little Traverse Bay, this lovely route follows the Lake Michigan shoreline, and the trees are as advertised. Consider it a fall treat from your editors at Grand Traverse Journal! 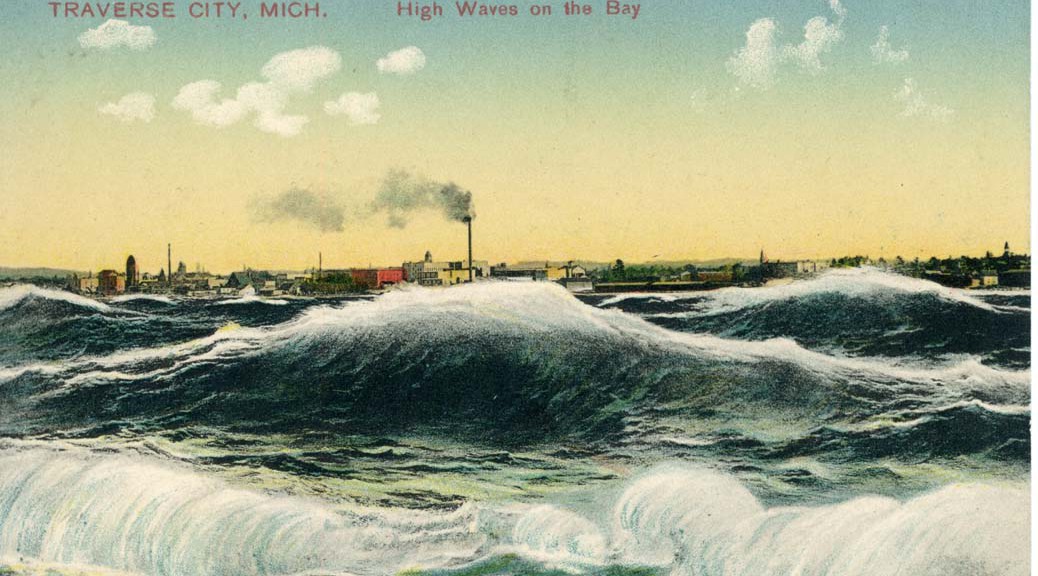 Honoring all hands lost at sea has been a ubiquitous ritual of life in the Great Lakes State. Despite the beauty of the Lakes, we are always fearful of the next Great Lakes Storm of 1913, or a November gale. Earning a living from the Lakes has never been an easy task, and we honor that struggle, sometimes in very creative ways.

Were you aware of the monument to those lost at sea that lies at the bottom of Little Traverse Bay? A 1,850-pound, Italian marble Crucifix rests there, about 800 yards off Sunset Park in Petoskey. Officer Denny Jessick of the Emmet County Sheriff’s office has long invited the public to view this memorial through the ice. These viewings began in 1986, around the same time that the Crucifix was moved from it’s original site, about 1200 feet off the Petoskey breakwall, where it was placed in 1962 by the U.S. Icebreaker Sundew.

This is a unique event honoring our communion with the Great Lakes, and a respectful (albeit fun) way to introduce people young and old to the history of that communion. A fun historical tidbit to throw out there while you’re on the ice: of the 12 ships lost at sea during the Great Lakes Storm of 1913, 4 are still missing. The most recently found was the Henry B. Smith, likely discovered in June 2013.

That’s right readers, time for a History Road Trip! The viewing of the Crucifix is always free and takes place if the ice is thick enough; Look for a tent at the viewing area. Viewing dates are publicized on the County home page, www.emmetcounty.org, in the Petoskey News-Review, and on local Chamber of Commerce web sites.