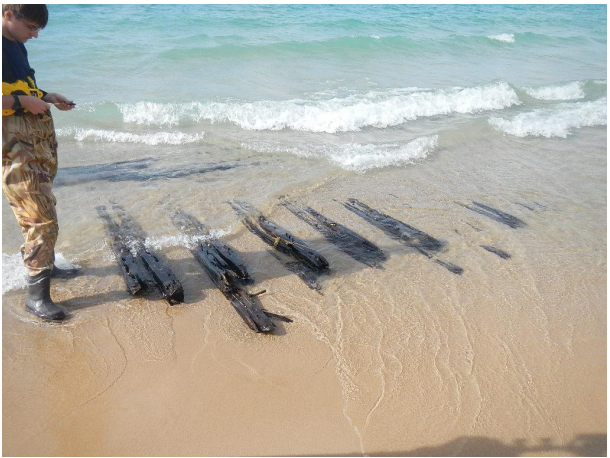 [This story was taken from Along Traverse Shores, by M.E.C. Bates and Mary K. Buck, Traverse City: the Herald office, 1891]

We were sitting on Prospect Hill [ed. note: Prospect Hill is located near Glen Arbor on the Homestead Resort property] watching the sun go down, –my friend, the school teacher, and I.

I think in all this Grand Traverse region there is perhaps no finer view than that from Prospect Hill.  Before us lay Lake Michigan, its wide blue expanse stretching on and out as far as the eye could see, till it merged into sky at the horizon line, behind which the sun, a glowing ball of molten fire had just dropped, leaving all the west a golden sea.  Ten miles or more out but looking as if within rifle shot, lay the Manitous, like emeralds in a crystal setting.  Hitherward lie the great waterways for all the craft that seek the Straits from the westward, or the Lake Michigan ports and Chicago from the eastward.  Clear and distinct, near at hand, or so far away as to be only ghostly outlines, were the white sails of numerous barks bound up or down.  Two great propellers with black plumes streaming from their smoke stacks, saluted each other with short, hoarse whistles, as they passed between the islands and the mainland.  Far out, dim murky lines lying against the sky told of other boats bearing their loads of gay summer travelers to the great city “at the head” or to the pleasant resorts beyond the northern horizon.

To the southeast Glen Lake, a mighty mirror set in forest crowned hills, and two smaller lakes reflected as faithfully blue of sky and green of wooded slopes.  Thriving farms dotted the shores or hid behind the gaps in the forest walls cut by stalwart arms of the pioneers who here have hewn out for themselves happy homes.

From out Glen Lake issued Crystal River, rightly named, slipping away to the beach of yellow sand on the shores of old Michigan, stopping to coil itself into many shining loops, lingering under arches of fragrant cedar, where in the dim green light, in dark pools of ice cold water, speckled trout hide under ferny banks—out of the shadow into the sun, and then back into the shadows again,–under rustic bridges, past the old red grist mill and so down to the shining sands where the waves lap the shore with musical murmur.

From our lofty perch we looked down on the tops of a ragged fringe of scrub pines and oaks that lay between the sand of the beach and the base of Prospect Hill.

“I do not wonder you love your “home by the silver sea’, so well:” I said.  “The half was not told me.  This must be the true lotos land, –the land of dreams—the land ‘where it is always afternoon.’  I could stay here forever.”

“But it is not always afternoon,” she said, “nor are the days all halcyon summer days.  I could tell you stories of wild storms, of wreck and ruin,–yes of heroic deeds such as you read in books, and that thrill your soul with thoughts of knightly emprise till you sigh for the olden days when men were indeed men, not knowing that there are heroes still whom we meet in our daily walks, only our eyes are dim and we do not know them for the knightly souls they are.”

“So? Perhaps that is true.  Tell me a story of your Traverse knights.  A bit of romance in this dull work-a-day world will indeed be refreshing.”

She clasped her slender hands across her knees, and looked far out on the misty lake, while a thoughtful light came into her pretty eyes.

“I never sit here as we do this evening, and looking out over the great sand dunes of Sleeping Bear, but I think of one wild Autumn day when the schooner Phelps went ashore on the bar below

“It was a night in late November in 1880.  The wind blew in a gale from the southwest, lasing the water into foam, the great rollers coming in with almost two hundred miles of unbroken sweep.  The schooner tried to gain the lee of the Manitous, and at the same time shun the sand reefs of Sleeping Bear, where many a good ship has laid her bones.  Suddenly the wind shifted to the northwest.  The sky was thick with blinding snow and she began to drift at the mercy of the wind.  They dropped their anchor but it fouled; they drew it and tried again.  This time it caught; the ship swung stern shoreward and bow out, trailing anchor, and drifting slowly toward the sand bar.  The great waves pounded against her sides with terrific blows.  The deck broke away.  The rigging fell over the side, forming a network through which the water seethed and foamed, dashing the broken deck high above the prostrate spars only to fall in the black gulf below.  One by one the crew were overcome and perished in the freezing water.  Only three were left, crowded on the bow above the mass of wreckage—the mate, the wheelsman and a sailor, a boy of nineteen.  They clung to the frail support till the boy, impatient at the situation, crossed the awful chasm, and tried to detach a portion of the floating deck.  At first he worked manfully, then slower and slower till he fell freezing on the deck.

“In the blinding storm the day broke,–the hours passed on and it was not till afternoon that the wreck was discovered from the shore.  The alarm was given and soon all the inhabitants of the little village of Glen Arbor, a short distance up the beach, were gathered on the shore.  Some one ran for a team of stout farm horses and a huge pound net boat, a great, flat-bottomed affair, cumbersome even in mild weather, was moved from the fish houses down by the village.  It was a perilous venture, and he who went took his life in his hand, but in an instant a crew had volunteered.  Strong hands launched the boat.  Through the tremendous surf, half way to the wreck, and they were swamped, and their boat coast back like a child’s toy.  They were all ice and chilled to the bone, but soon they launched their boat again, four of the first crew going out, and a slender young fellow with nerves of steel and muscles of iron under his fair skin took the stern oar in place of the fifth.

“Again they battled with the waves, rising on the crests only to be hurled into the chasms.  They neared the vessel, reached the bow where the sailors clung, eagerly watching their movements.  The waves dashed against them, the wind roared around them, the snow blinded them, till human endurance could stand no more, and they were driven back, foot by foot.  The poor fellows on the wreck saw their rescuers leave them, and begged for help in the most piteous tones.  Reaching shore the brave men, wet to the skin and stiff with ice went for dry clothes, then once more made an attempt to reach the wreck, as it was certain the sailors could stand it but a few moments more.  This time they moved down the beach and started out obliquely with the tide.  Wilder than before, the blinding snow squalls beat upon them.  When almost at the wreck, fearful breakers, too powerful to pull against, drove them back in spite of their greatest efforts.  The cries of the sailors when they saw them lost ground were heart rending.  They renewed their efforts and soon were alongside.  They moved up to the floating mass of tangled rigging and loose boards, where they clung to a spar, thus steadying their boat, while one of the men, the mate, tried to cross the heaving wreckage.  He reached a long spar, and putting his arms around it, crawled painfully forward, while the waves surged and beat over him constantly.  At last he reached the boat and was helped in.  Next the wheelsman made the attempt.  He crossed a third of the spar then stopped and could come no further,–he clung helplessly with his bare hands and it seemed as if his life must be lost.  In the boat below, an old sailor from many-harbored Maine, rose from his seat, stepped into the jostling mass of rigging and wreck, made his way to the perishing man and brought him back in safety.  A few moments more and the surf was passed—the shore reached at last.

“All these brave men are the possessors of gold medals awarded them by the government at Washington, for their heroism.  Said I not well there are knightly souls who walk among us to-day?”

“I think, my dear,” I said, “that one of these brave Traverse knights was your hero.  Have I not guessed right?”

She glanced at me over her shoulder, half archly, half shyly, while a deeper flush rose to her cheeks.

We rose from our seats, and hand in hand, to help each other down the steep descent, took our way to the distant farm house, from one of whose windows a bright light shone out like a star to guide us on our path.

We can compare the account described in Some Traverse Heroes to the actual event as reported to the editor of the Grand Traverse Herald, November 27th, 1879 edition (The shipwreck occurred on 20, November of that year).  At the outset we can see that M.E.C. Bates got the date wrong: it was not November of 1880 but a year before.  There are a few other discrepancies—the wreck was discovered early in the morning, not at noon, two persons were saved, not three, and the rescue crew did not appear in an instant (it took a while to get two rescuers to risk their lives).

M.E.C Bates was correct when she said members of the rescue crew received medals for their bravery.   John Blanchfield, William A. Clark, W.C. Ray, Charles A. Rosman, and John Tobin were awarded Gold Lifesaving medals on April 8, 1880 by the combined agencies of the Coast Guard, US Lifesaving Service, the Lighthouse Service, and the Revenue Cutter Service.

Even with occasional errors in the telling, Traverse Heroes is included here for several reasons.  The description of the view from Prospect Hill is charming and reminds us of a panorama we can enjoy to this day.  The language M.E.C. Bates uses in her descriptions recalls the florid prose of the era.  It is refreshing to immerse ourselves in it as a change from our present style of rock-solid nouns and boldly stated verbs.  Finally, she expresses the lofty values of her day as she talks about knightly gallantry, even providing a glimpse of the modesty of young women of the time when they are confronted with the possibilities of love: Upon being found out for having a love interest in one of the rescuers, the teller of the tale displays a flush in her cheek.  The newspaper article itself expresses the editor’s opinion that the event reminds us of the “chivalry and knightly deeds” of old.   The framing of the story as a tale of gallantry in both article and story is probably not a coincidence: M.E.C. Bates was married to Thomas T. Bates, the editor of the Grand Traverse Herald.

The story is not yet told.  In 2014 timbers from a shipwreck were uncovered by low Lake Michigan water levels.  Were they remnants of the W.B. Phelps?  We don’t know for sure, but the location fits perfectly.