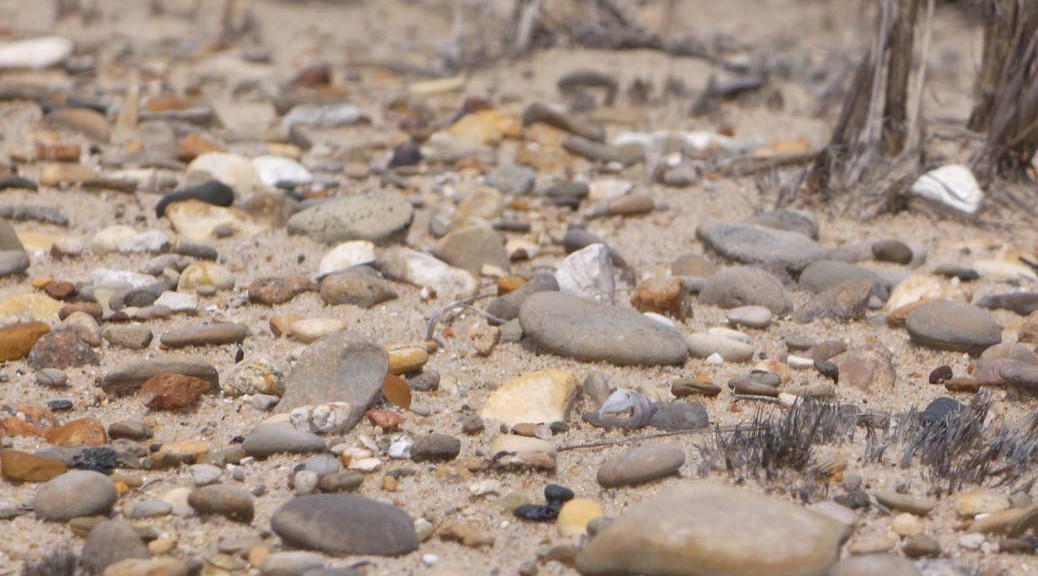 Some years ago I took a summer geology course from Central Michigan University at its Beaver Island Biological Station.  The professor, an enthusiastic geologist named Richard Dietrich, introduced me to such wonders as vugs, banded gneiss, rhyolite porphyry, and ventifacts.  While much of the knowledge gained about these topics has inexplicably evaporated into thin air, I do recall ventifacts in some detail, perhaps because I have identified several ventifact fields locally.

Students of Latin may know the meaning of “ventifact” from the word itself.  It is derived from the word ventus, wind, from which we get “vent” and “ventilation”. A ventifact is an object, often a stone, which has been shaped by the wind.  A ventifact field, sometimes called a “lag gravel”, is a place where such things are found–often in dry sandy places like a desert or the surface of the planet Mars.

Lag gravels are associated with sandy beaches liberally mixed with stones, but not every such beach is a lag gravel.  The beach must be exposed to long fetch of prevailing winds, not protected by nearby bluffs or foredunes.   It also should be protected from invasions of humans piloting vehicles at the shore or bearing beach paraphernalia: Frisbees, beach balls, volleyball nets, and all other such sources of amusement.  Ventifacts are only found where human traffic is at a minimum.

How is a ventifact field different from an ordinary beach?  The simplest way to tell is by looking at the stones in relation to the sand: Are they embedded or perched?  Perched stones stand up on the surface, the surrounding sand having been blown away.  The stones themselves, upon careful observation with a magnifier, display the characteristics of wind-driven abrasion: a high polish on exposed surfaces of those made of hard minerals like granite and a pitted, eroded surface on those composed of softer rock.

Polished stones shine in the sunlight on surfaces exposed to the wind, the surface resting on the ground showing no such luster even if washed and dried.  Fossils stand out in relief as the softer stone around them wore down: Petoskey stones are especially striking, not requiring the usual hand polishing required to bring out their design.  Best of all (for me) are the sedimentary rocks like siltstone or shale which, under ten power magnification, look like miniature scenes from eroded places out west like the Badlands of North Dakota or rocky areas of New Mexico.  Mixed in with the rocks are occasional pieces of weathered glass or slag from old iron smelting operations.  They frequently find a place upon windowsills or within boxes people keep to remember their experiences.  Artifacts like these connect us with those who lived here long ago.

How does the wind polish and erode ventifacts?  At first it was thought that blowing sand did the job, but on closer inspection, it turned out that wind-driven dust (derived from sand) played the most important role.  It takes a mighty wind to lift sand, but less to blow dust.  Stones can be polished even on days of lighter winds.

I won’t tell you exactly where ventifact fields are because I do not want to increase human traffic in these precious places, but I will tell you this: Sleeping Bear National Lakeshore has them.  So does one isolated beach along Grand Traverse Bay.  If you go out looking for one, remember to look for a broad beach with perched stones—and the stones do not have to be large—they can be only pebble-sized.  Be sure to bring your magnifier, at least ten power.  To see the fossils in relief, the shiny surfaces, and eroded landscapes you will need at least that magnification.  If you find a ventifact field, be guarded as to whom you tell.  There are places endangered for their geology as well as for their biology.  We need to protect them, too.

Richard Fidler is co-editor of Grand Traverse Journal. He enjoys a long hike to undisturbed beaches, and leaves them the same way.