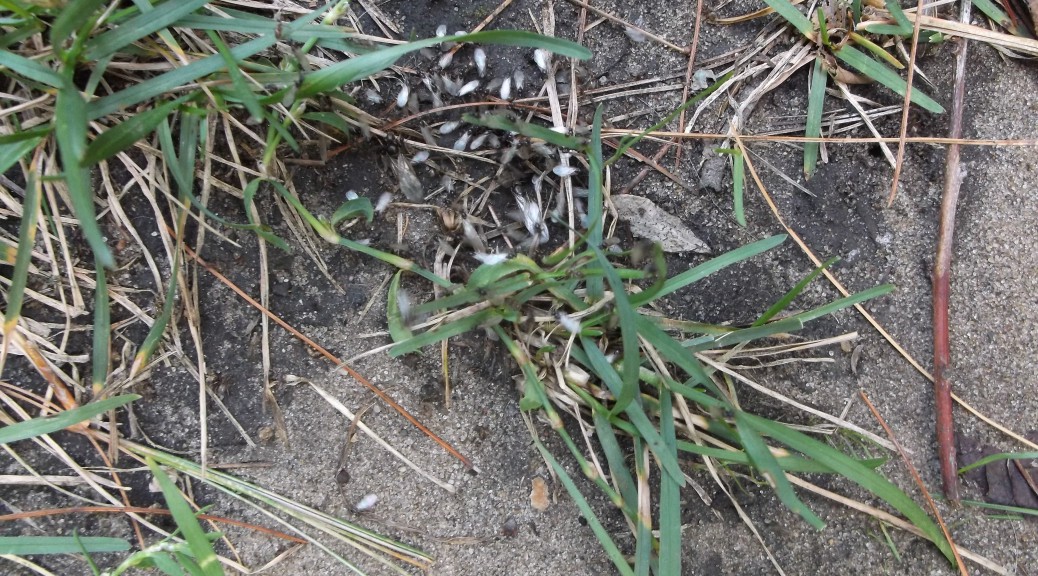 The voice on the other end was animated: “Come over now!  They’ve got wings and they are swarming!”

I knew what she was talking about because I had discussed the subject previously.  Ants were beginning their nuptial flights.

“I’ll be right over!  See what you can do to keep them from flying!” I answered with unrestrained emotion.

“A spoonful of sugar?  A dead beetle carcass?  I don’t know what to do!” she wailed, enjoying the conversational gambit.  I took no time to reply and jumped into the car with my camera.

My friend met me in her driveway when I arrived and led me to the scene.  There they were: tens of small winged forms with two or three larger winged ones mingled among them.  Some tiny workers, wingless bit players in the drama, milled around as if uncertain what to do.

My camera is not the best and my skills as a photographer are unremarkable, but I set it on macro, focused, and shot five times without a flash.  The best ones appear in this account.

The word “nuptial” has to do with marriage, but that term has to be stretched to encompass the nuptial flights of ants.   Males—the drones—finally emerge from the depths after having been taken care of the entire season long.  No doubt some female humans can relate to that scenario.  At the same time, a number of virgin queens were similarly readied for this day, the day they would be inseminated and fly off to found a new colony.  It is a “marriage” in name only.

When the day length is right—late summer as a rule—and when conditions of humidity and sunlight somehow satisfy senses of the colony, the nuptial flight begins.

One-by-one the females depart, the males flying up with them.  No doubt a chemical exuded by them induce the males to fly upwards, towards the light.  However, the drones do not necessarily inseminate the colony’s virgin queens: after all, that would be incest since all members of the colony have the same DNA.  Under the best scenario, males from another colony would mate with them far away from the home colony.

The mating of ants takes place quickly and without ceremony.  After separating, the “lucky” male flies away to die as his food reserves run out.  He has served his purpose, and no longer receives the attention of his colony.

Meanwhile, the queen continues her flight, carrying the sperm in an internal packet which she will use over her entire reproductive life (several years to as many as 23).  If she avoids interactions with predacious insects, birds, and car windshields, she will settle down and remove her wings through a deft motion of her body.  Then she will seek to dig a burrow and lay her first eggs.  It is the only “manual labor” she will have to perform because newly hatched workers will take over the mundane tasks of gathering food, carrying out the garbage, and taking care of new workers as well as the new princes and princesses of the next generation.

By the way, the new potential queens differ not at all from the workers: they only receive special food that grants them royalty.  In a sense, it is like the transformation of a frog into a prince, since in each case a lowly, unprepossessing creature becomes something wonderful.  Males, on the other hand, differ significantly from females: they have only one set of chromosomes (as opposed to two sets in the females).  No doubt they, like human males with only one X chromosome, suffer certain genetic diseases more frequently than the females that surround them.

Winged ants cause psychological trauma in some persons.  They grab insecticides and spray until the ground is littered with insect carcasses.  I don’t know if this account of ant reproduction will score any points with those who regard the only good insect as a dead insect, but I hope it might suggest that the winged forms are temporary and cause no harm.  They do not eat our food, nor do they sting or bite.

It is not too late to see winged ants.  In their book Journey to the Ants, E.O. Wilson and Bert Holldobler describe the scene of a common ant that enacts nuptial flights during September:

The slaughter of failed reproductive hopefuls can be seen all over the eastern United States at the end of each summer, when the “Labor Day ant,” Lasius neoniger, attempts colony reproduction.  The species is one of the dominant insects of city sidewalks and lawns, open fields, golf courses, and country roadsides.  The dumpy little brown workers build inconspicuous crater mounds, piles of excavated soil that encircle the entrance holes, causing the nests to look a bit like miniature volcanic calderas.  Emerging from the nests, the workers forage over the ground, in among the grass tussocks, and up onto low grasses and shrubs in search of dead insects and nectar.  For a few hours each year, however, this routine is abandoned  and activity around the anthills changes drastically.  In the last few days of August or the first two weeks of September—around Labor Day—at five o’clock on a sunny afternoon, if rain has recently fallen and if the air is still and warm and humid, vast swarms of virgin queens and males emerge from Lasius neoniger nests and fly upward.  For an hour or two the air is filled with the winged ants, meeting and copulating while still aloft.  Many end up splattered on windshields.  Birds, dragonflies, robber flies, and other airborne predators also scythe through the airborne ranks.  Some individuals stray far out over lakes, doomed to alight on water and drown.  As twilight approaches the orgy ends, and the last of the survivors flutter to the ground.  The queens scrape off their wings and search for a place to dig their earthen nest.  Few will get far on this final journey…

Most winged forms die without our help.  Insecticides are superfluous.  Besides, why would anyone want to do away with a major natural spectacle?