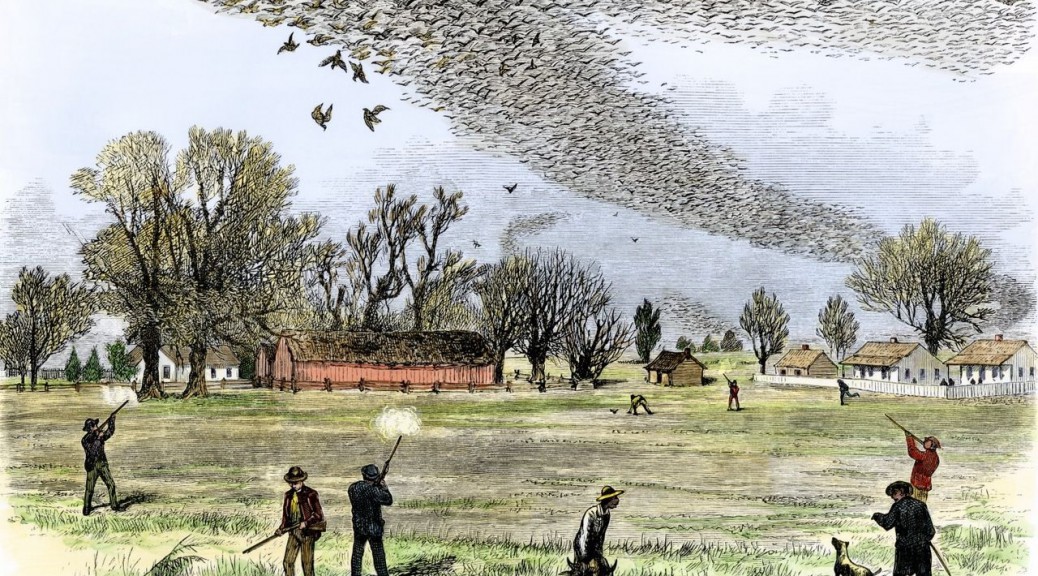 Dear Readers:
This follow-up article to one published in our March issue on Passenger Pigeons was inspired by the following correspondence your editors received from an admiring reader:
“I thoroughly enjoyed your recent article on passenger pigeons.  Since the topic isn’t discussed very much I thought I would seize the opportunity to share some of my notes on the topic.
A unique source (locally) is a personal history, “A Brief Sketch of the Life of Charles B. Slyfield,” that resides at the Benzie Shores District Library, with copies of it held at the Benzie Area Historical Museum.  Mr. Slyfield’s history is thirty-some pages and covers commercial fishing, tug operations, the history of Frankfort, and his dog Hero in addition to pigeon hunting. ~ Andy B.”
Naturally, our regular contributor Stewart McFerran took to this new resource with a renewed vigor on the subject of Passenger Pigeons. Charles B. Slyfield (1854-1924) was a fisherman and lighthouse keeper at Frankfort, in addition to a hunter.  ~ Your editors at Grand Traverse Journal

by Stewart A. McFerran

About the first of May we pitched our tent and set and baited the traps. Father had hired William Salsgiver and his net to work with us as he was an expert pigeon trapper. The pigeons nested up river about five miles and would fly just as soon as day would break. The first flight would be all males. Then about 7 a.m. the females would start and keep it up until about 10 a.m.

Father rented 40 acres of marsh land on the South side of the Betsy River where there was situated a salt spring and pigeon marsh where the pigeons would assemble in great numbers to eat the muck and drink the water.   (A Brief Sketch of the Life of Charles B. Slyfield,  published in 1912)

Needless to say a slaughter of passenger pigeons ensued. However, these observations from Slyfield’s younger years bring up some questions with regard to the extinct bird. Why would they “eat the muck”? Was there some sort of larva or invertebrate that was nutritious within the muck? Or was there a mineral that the birds craved?

The segregated flights from the nesting ground to the feeding ground is in itself a fascinating detail.

In addition to nesting habits, Slyfield provides detail on their cross-lake roosting and feeding habits: “Old hunters and sailors tell me that great numbers of pigeons had their roost in Wisconsin and flew to Michigan each morning to feed on Michigan beechnuts.” By his reckoning, as the pigeons flew at a speed of I believe 180 miles an hour, they could cross the lake in 20 minutes. [Note: the fastest bird is said to be the white throated needletail which can attain a speed of 105 mph in horizontal flight]

Readers of Slyfield’s biography can appreciate the detail he offers about the pigeons, and we realize this deep understanding of the pigeons’ habits were also just the thing that allow hunters to exploit them in such a shamelessly unsustainable way. Certainly, as Slyfield includes the Passenger Pigeon extinction event in his memoir, he must have realized by the end of his life what it meant for the ecology of the region. Details of ecological relationships that Passenger Pigeons had are fascinating.

Men caught birds alive by fastening big nets to the tops of springy saplings, fastening the nets close to the ground, baiting the area and then springing the trap when the birds came to eat; it was said that a single trap would catch from three to five hundred pigeons.

The new theology has borrowed, without credit, one of the fundamental planks in the old religion: despite his disclaimers, man stands at the center of the universe. It was made for him to use, and the best and wisest men are those who use it most lavishly. They destroy pine forests, and dig copper from beneath the cold northern lake, and run the open pits across the iron ranges, impoverishing themselves at the same time they are enriching themselves; creating wealth, in short by the act of destroying it, which is one of the most baffling mysteries of the new gospel.

Before “sustainability” terminology was coined and in common use, Catton wrote about “the mysteries of the new gospel” in his 1972 memoir Waiting for the Morning Train. This, in my view, makes him not just an important writer of history but an unappreciated environmental writer.

We may not be able to watch the majesty of a cloud of Passenger Pigeons in the sky today, but the vivid descriptions Slyfield and Catton survive on as a record of their existence, even if questions about their muck-eating remain unanswered. Hopefully, their writings also provide a sobering reminder for those who would abuse our Region’s natural resources.

Stewart A. McFerran is an outdoor enthusiast and regular Benzie-area contributor to Grand Traverse Journal.