Renovation and repurposing are popular. Proud do-it-yourself folk  will be glad to show you the end tables they salvaged to make a bench, or gloat over their latest acquisition from Odom’s (a wonderful reusable building materials supply store in Grawn). We have all sorts of fun jargon to describe these activities: recycling, upcycling, flea market treasure-hunting. Demolition is violent and ugly, whereas reusing materials makes us proud, like the craftsmen of old who hewed their mortise-and-tenon joints one at a time.

The most ambitious of these projects must be the restoration of an entire building. The end of some buildings, like those recently demolished in Traverse City’s warehouse district, (where concrete block won out over fine architecture) tends not to pull at the heart strings. But in many cases the intrinsic value of a building merits the effort of removal and renovation.

Even if you can reuse a building on a different site, how do you move it safely? In the modern era with equipment and wide-load trucks (a ubiquitous sight when you are needing to get somewhere quickly and are headed down a narrow road with no shoulders), the task is more than possible. But let’s take a look at “then,” when horsepower wasn’t just an abstract unit of measure.

After construction, the church enjoyed a thriving congregation due to the draw of well-esteemed clergymen, from 1876 to 1886. In that last year, Rev. Joseph S. Large vacated his office due to ill-health and the church found its congregation numbers in a slump, forcing the doors closed until 1891. A new call was put out that year, and the church building was again put to use.

For reasons not clear now, the location of the building was a problem, but the members deemed the building’s sacred purpose warranted the effort of preservation. In stepped James Morgan, a Chicago businessman and partner in Hannah, Lay & Company, who encouraged the removal of the building to it’s current location at 341 Washington, across the street from the County Courthouse.

By employing jacks, the church was first lifted off its foundation; heavy beams, greased and with pointed ends, were secured to the underside, which would act like runners on a sled. A temporary wooden track made of flat planks and cross ties (similar to railroad tracks) were laid on the roadway, and the structure was pulled across the track on the greased beams. Once part of the track was cleared, workers would move and install the track at the front of the structure, and the job continued.

A capstan was necessary to apply enough force to move the church, as a lone horse wouldn’t be strong enough on its own. This capstan operated much like the ones seen on ships to raise anchor. In the photograph, you can see the capstan was moored in the roadway with large posts driven into the ground and attached with chains.  The horse would rotate the axle by walking in a circle and would pull the structure along the temporary track. As the picture was taken while the horse was resting, the chains mooring the capstan to the ground are slack.

Wondering how much the Church was set back for this endeavor? We are led to believe that Mr. Morgan footed the bill, at a cost of “nearly one-thousand dollars,” or about $30,000 by today’s dollar value.

Ann Hackett, Parish Administrator of the modern Grace Episcopal Church, gave me a tour of the interior of the remodeled church. As she explained, when it became clear that the previous structure was no longer viable, the congregation made every effort to retain the overall feel of the church by focusing on the details.

The stained glass windows were salvaged and used in the new structure, as was the original altar and painted archway.  The cornices in the modern building were modeled after the original fixtures, and the interior was surfaced in wood bead board, mimicking the interior of the original.

The new baptismal font, which is situated immediately within the Church’s nave, best illustrates the congregation’s drive for authenticity. The original font was too small to meet the purpose of the growing Church; craftsmen created the new font to have a similar overall shape and use the same font-letter style, as shown here. Grace Episcopal Church is a perfect example of the beauty and pride we share when we salvage the past.

References
Leach, M.L. “A History of the Grand Traverse Region,” 1883.
Sprague, Elwin. “Sprague’s History of Grand Traverse and Leelanaw Counties, Michigan,” 1903.
“The Value of a Dollar, 1860-2014,” fifth edition.
Thanks to www.shiawaseehistory.com for their description of house moving in the turn of the last century.
Thanks to the Binkley’s for allowing use of their house moving photograph through a Creative Commons license: https://www.flickr.com/photos/binkley27/.
Thanks to Ann Hackett, Parish Administrator, and her staff for their time.

Amy Barritt is a librarian at Traverse Area District Library and co-editor of Grand Traverse Journal. She enjoys going out and discovering history, especially when she makes new friends at the same time! 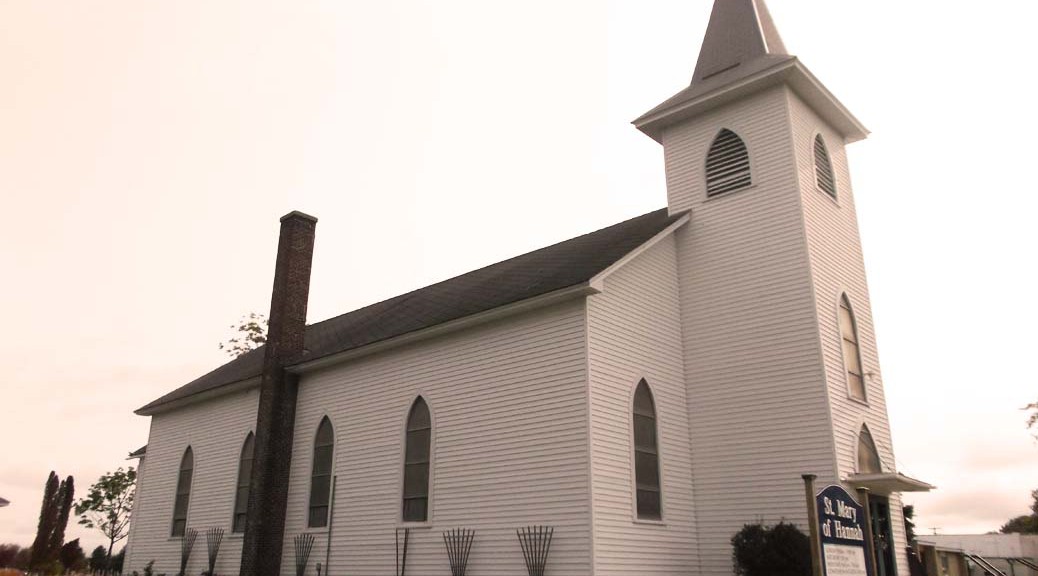 Hannah St. Mary’s has a story no one besides a few select people know. This is that story.

It all started when the first settlers came to Hannah. Around 1850 Perry Hannah, A.T. Lay, and James Morgan came and bought a sawmill along the Boardman River and started a business. Then in 1857 Congress passed a grant allowing funds to build a railroad in Michigan from Grand Rapids to Traverse Bay. In 1862, George Nickerson and his family came and urged other families to join them.  In 1872, with the railroad finally finished, settlers came from all over for the cheap land and the plentiful amount of timber.

Later, after the railroad was built, they decided that they needed a church, building and completing it in 1885.  However, the church did not have any altar fixtures in it until around 1896 when they bought their altar. It cost $81.84.  It probably does not seem like much to us, but back then it was a large sum of money.

As always, horrible things seem to constantly plague good people; this church was no exception. In the late 1800s or early 1900s robbers on horseback stole everything from their altar.  That, ladies and gentlemen, is where this story begins…

This is the account told to me by Eugene and Jim Johnson. In 1982 on Easter Sunday Eugene Johnson took his eight-year-old son Jim fishing on Fish Lake.  It was a slightly chilly, foggy day but you could still fish. They also took Jims’ metal detector to fiddle around with later.

At long last, after continually failing to tempt the fish to bite, they pulled out the metal detector. They started in the parking lot, just finding small things such as pennies and other small coins. But as time passed, they wandered on down into the more swampy area of the woods past the campground, and over a bank when suddenly the metal detector was almost off the scale.

When they looked down they saw something that resembled metal. They set the detector down and gently started digging. Soon they discovered that the first piece of metal was the base of a tarnished candlestick. They kept digging as the fog danced around them.  Soon Jim found a potato sack; When it finally left its grave, it was revealed that it was chock-full of more candlesticks and vessels.  As they dug even deeper, they started uncovering more candelabras–and discovered the piece that explained what all the others were, a large cross.

Eugene, once having been an altar boy, recognized the cross as one that might grace an altar. The question was where had these treasures come from? Eugene had never heard of a robbery of a church in the area. But they couldn’t just leave these gorgeous treasures alone could they?

They packed the pieces off and went home to ponder their questions in a safer setting. When they arrived home and explained the situation to Eugene’s wife, Vicky, she suggested, “Why don’t you take it to our pastor, Father Murphy?”

They did just that. After explaining their predicament once again, Father Murphy agreed that the artifacts were in fact like the ones put on a Catholic Church altar. However, while the tarnished silver artifacts were found, none of the gold artifacts that would grace an altar were found.

Father Murphy suggested that he take the items in question and in the meantime he would look through old church files and see if he could find out the story behind the artifacts.

Later that day or the next, Father Murphy called up Eugene and said, “Have I got a story for you.” He then proceeded to tell them that in the late 1800s or early 1900s the Hannah St. Mary’s Church had been robbed on horseback. The number of bandits and who they were are an unsolved mystery to this day.

Pretty amazing story huh? Sadly the story never reached the news. The artifacts were put on display in the church rectory; Diane Gray, a Church secretary,  remembers seeing some tarnished altar pieces in the office.  However, today they are probably stuck in some dusty boxes, shoved into an even dustier basement where their history will never see the light.

I am sorry to say that though many questions have been asked, no one can remember this story and that has made it hard to gather facts, though I am ecstatic that, due to research questions, more people know this fascinating story. I have spent several hours at the Traverse Area District Library looking at newspapers but have not found any mention of the robbery of any churches except for an attempted robbery of the St. Francis church in 1905.  I did discover that the early history of the town was filled with robberies and murders. I spent quite a bit of time talking to members of the church whose families belonged to the church for a long time such as Margret Lewis, Messrs. Ray and Jay Weber and former parish secretaries such as Diane Gray and Terry Javin. I also spoke with Sue Zenner the daughter of Julia Harrand who wrote a book on the history of Hannah St. Mary, and interviewed Eugene and Jim Johnson who were the ones who found the treasure.

Hannah Carr is a student at Kingsley Area Schools, who is passionate about writing and research, although she prefers writing mysteries to nonfiction. Carr was one of the winners of the 2014 Floyd Milton Webster Prize for History (Kingsley), Young Adults, for this article. She plans to be responsible with her Prize winnings, and the Editors look forward to her entry next year.