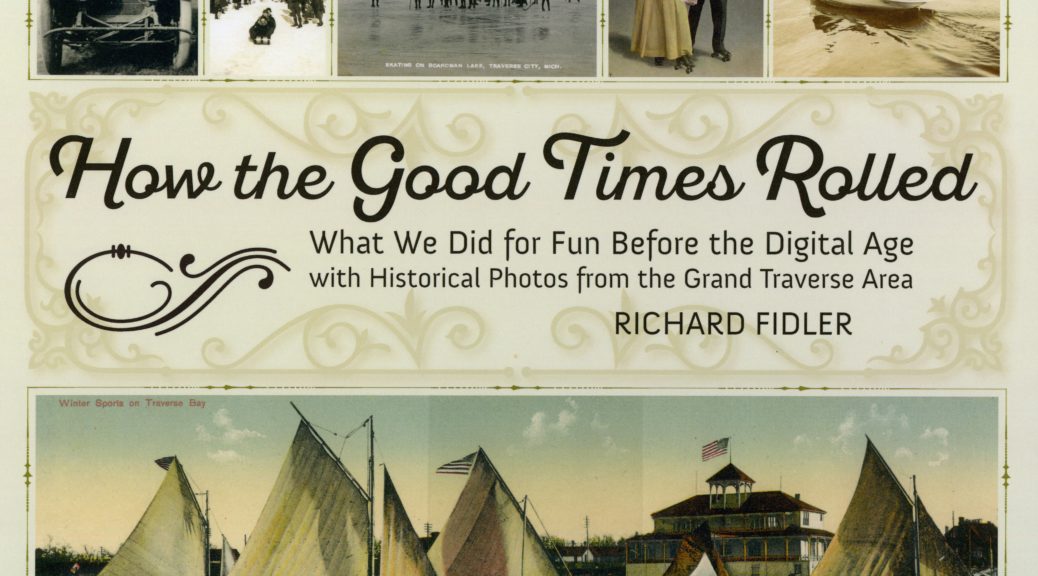 “Bright-eyed and bushy-tailed” is the phrase the old folks tell me is appropriate for the morning attitude (ugh), but despite how you tackle the day, each of us has our hours to fill. Perhaps you will accomplish some daily chores, get in a little of your paying gig, and generally let the time go to waste. Or, you can take a cue from the new book, How the Good Times Rolled by author and Grand Traverse Journal editor Richard Fidler, and live it up like we once did.

This lament begs the questions, “How were things different ‘way back when’? How did people enjoy themselves?”

Using a variety of sources, including diaries and other personal accounts, contemporary newspapers, and the archives of various clubs and social groups, Fidler sought to answer these questions. Each chapter provides some brief history about the given subject, from outdoor sports to celebrations. I found his writing to be read easily with children as well, rather lively and engaging. Interestingly, Fidler found “the Traverse region does mirror the social milieu of America generally,” despite the region’s relative isolation and lack of diversity.

The real beauty of this volume is the quality and quantity of photographs used to illustrate this social history. A passing familiarity with photographs taken in the late 1800s to the early 1900s leaves one with the impression that people Just. Didn’t. Smile. But Fidler has plumbed the depths of several amazing collections, from the Benzie Museum and Historical Society, the Leelanau Museum and Historical Society, and the Traverse Area Historical Society collection held at Traverse Area District Library, to reveal a significant truth: people of the past loved having fun!

Some especially notable images are those of Buffalo Bill’s Wild West Show, a traveling attraction that visited Traverse City in 1898; images of people enjoying libations and other vices (even during Prohibition); sheet music covers from the famed Liz Bannister collection, depicting popular dances; and amazing action images of horse racing, bicycling, and sailing (and ice boats, too!)

I recommend treating yourself to the hardcover edition, which contains both color and black-and-white images. Again, this is fun to read with others or alone, and any age group will find something within to marvel at. If you have a summer home around these parts, this would be especially nice to take back to your winter residence as a coffee table book.

Whether you want to learn more about the past, or reminisce about how it was “way back when,” How the Good Times Rolled: What We Did for Fun Before the Digitial Age is the book for you! Available at local booksellers and Amazon. 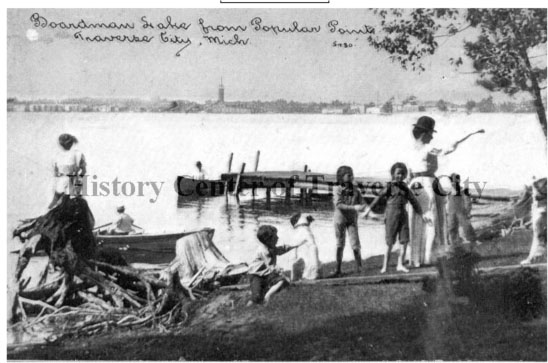 From the late 1890s through the 1920s, a  lovely, pine-covered parcel of land on the east side of Boardman Lake was the most popular picnic spot in the Traverse City area. Poplar Point was located about half way down the length of the lake near what was then a sparsely inhabited area called Boonville, just west of what is now Woodmere Avenue, between Carver and Boon streets.

Poplar Point was a perfect spot for people to enjoy a day on the lake. Being  a much smaller body of water, Boardman Lake was a safer option than the bay for swimming or enjoying small  watercraft– rowboats, sailboats and even human-powered paddle boats. The small point jutting into the lake was an isolated spot to sail, row or drive to and made for a perfect picnic site. Although it didn’t have what you’d call a bathing beach, it had a small dock for boats to pull up to or for someone to fish from.

In the 1890s, picnickers could reach Poplar Point by horse and buggy, their own boat, or by hiring John Boon’s steam launch Ada which would take passengers from the Cass Street bridge to Poplar Point. The Ada sank in the river in 1897, but a few years later another entrepreneur, a boat builder named Arthur R. McManus, built a  30-foot launch  and named it Elf. McManus lived at 406 E. 8th St., about where Boardman Ave. ends at 8th Street.  Right out his back door was the Boardman River where he built a dock. In the summer of 1907, McManus started daily boat service with the Elf plying both the lake and river. He also had boats for hire and would deliver fishermen to their favorite spots along the lake.  Fare to Poplar Point and back was ten cents.

During the summer and warm fall months, Poplar Point was where church groups, clubs, and families gathered for outings, and where businesses held their employee picnics. In the 1890s, a baseball field was established on the flat land above the picnic grounds, and many a summer day was spent by people enjoying a friendly game of baseball between teams made up of employees from the various businesses in town– Oval Wood Dish, T.C. Canning, Hannah & Lay,  and the Refrigerator plant. Other teams that regularly played at the point were the East Side Hustlers, the Peach Basket Makers (of the basket factory), the Bulldogs, Pierce’s Corn Huskers, and Layfayette’s Colts.  In addition, teams came in from outlying towns like Acme, Almira and Fouch to play against the locals.  Other activities included challenging games of tug-of war, three-legged races and egg races. A small pavilion provided a place to dance and sometimes a band would be brought in to play for an event. Most of the picnickers went to Poplar Point with their own horses and buggies, and they tethered their nags to the trees up on the flat and carried the picnic baskets down the steep slope to the picnic ground. Then there were buses which took loads from down town to the picnic grounds for a dime each way.

In another article, Smith remembers the Elf: If you really wanted a thrilling boat ride, you should have taken a trip on the Elf. The Elf was a naptha launch which carried passengers from the east end of East Eighth street bridge to Poplar Point and back. Its home port was the dock in back of Art McManus’ house at the east end of the bridge…The Elf carried about twenty passengers or less and had a canopy top…The Elf tore along at a speed of four of five miles per hour and the trip each way took a half hour. It was a busy ship when there were baseball games at the point or Sunday school picnics.

McManus ran the Elf at least through 1910 (no newspaper mention of the boat after that year), and continued his boat livery business for several years after. Perhaps by that time, demand for the boat transportation was starting to diminish, though picnics at the point were still common.  By the late 1920s, popularity of the point had faded, although it is believed the picnic grounds continued to be used by locals until the Parts Manufacturing established its plant on the land in 1939.

During his boatbuilding career, McManus worked with another skilled boat builder, Claude E. Finch. About 1906, boat making had become a small industry in town, with several companies already established to fill a need for locals who desired a boat to enjoy on the lake, bay and river.  The partnership of McManus & Finch dissolved in 1906 when Finch became ill with tuberculosis and could no longer work. Both men had established reputations as the builders of quality boats, even though other boat builders were doing business on a larger scale than McManus–among them, Victor Montague, Irving Murray and Chris Thielgard [Telgard].

McManus was well known in town as the popular operator of a popcorn stand on the corner of Front St. and Cass St. during the summer months.  He passed away in early 1918,  at the age of 63. Just four years later, his wife  Anna was tragically killed when she walked into path of an oncoming train just two blocks from her home.

Julie Schopieray is a local historian and writer. She is currently working on a project concerning Jens C. Petersen, a Traverse City architect who practiced in this city from the early 1900s to 1918.