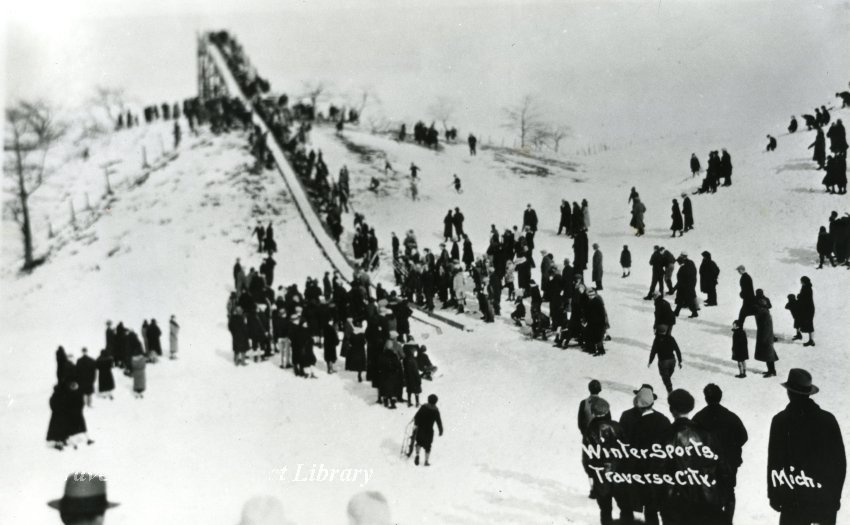 The whole town was excited–on New Years Day the toboggan slide would open.  For weeks townspeople had watched the gigantic structure emerge above the tree line near the intersection of Franklin and Webster streets.  The Toboggan Club of Traverse City had created the tower and supervised its operations.  Two smaller runs—for the young or the faint of heart—extended from a hill nearby, probably located where two residences now stand at the corner of Webster and Railroad streets.

With a board of directors of distinguished citizens—long-time resident S.E. Wait, storeowner James W. Milliken, Julius Hannah, son of the town founder, among them—the Club laid out simple rules to be followed by all participants.  Each person would receive a badge for the season at a cost of ten cents.  Participants would have to be thirteen years old to ride the steep slide and ten to ride the lesser one.  Those that created nuisance would be removed from the site.  The tone of the advertisements published in the Grand Traverse Herald as well as the price of a badge suggest the project was a civic undertaking not intended to generate a profit.

The slide was truly magnificent.  Estimated to stand sixty feet high, the chute would send riders all the way to frozen Boardman Lake, crossing a dirt road soon to become Eighth Street along the way.  A visitor to town in 1887 remarked in his diary how the toboggan tower stood above the city, serving as an observation deck in warm months from which one could see the Bay, the Boardman Lake, downtown, and the newly built Northern Michigan Asylum.  The Herald spoke with pride about it, “The toboggan slide is all ready for business.  It is probably the best slide in the state.  Should provide lots of winter fun for our young people.”

The “best slide in the state” offered a thrilling ride.  The chute was packed with snow and then watered down to make ice, a surface that shot riders down the steepest part of the slide in seconds.  Screams accompanied the descent and continued for the quarter mile the toboggan coasted.  It was not a ride for the faint of heart.

The boast about the slide being the best in the state suggests toboggan slides were popular in Michigan at this time.  Indeed they were popular, not only in our state, but across the nation.  N-Gram Viewer, a website that examines word usage from 1800 to the present, shows the rapid rise in the use of the word “toboggan” beginning in 1880.  It reached a peak in the later nineteen century, only to rise again in the 1920’s, since dropping off.  Toboggans were a fad that rose rapidly, only to subside after a few years, and then to revive after a thirty-year hiatus.

In the 1880’s the “toboggan suit” became a necessity for young active women to wear on the toboggan runs.  It was described in the Ladies Home Journal as a garment with a removable hood, very warm, loose-fitting so that it can be worn over a wool dress.  It allowed the arms to move freely, containing “nothing to hurt,” even if the wearer does get “left” in a snow bank.  Presumably men’s clothing stores carried toboggan suits, too.

Sadly, the toboggan run lasted only one winter season, 1887.  The May 5th, 1887 edition of the Herald tells the story:

Toboggan Slide Blown Down.  This is unfortunate as it would have provided a fine outlook for the town during the summer months…The girls in town are all mourning over the destruction of the toboggan slide.  One by one they bring out their jaunty suits and, looking sadly upon them, wonder what in the world they can use them for now.  It is too bad a pretty girl—and our girls are all pretty—in a toboggan suit is as fair an object the world of handsome women can show.  But, sic transit gloria mundi—and it was a blue Monday too for the dear creatures.  The Herald sympathizes with them from its inmost soul.

It wasn’t just Traverse City that saw an abrupt end to its toboggan slide.  The fad evaporated all over the country at about the same time.  In 1886 the Chicago Tribune quoted a New York newspaper that remarked upon the rage of tobogganing, but only three years later, reports from many locations indicate the toboggan chutes had disappeared.  Some attributed their demise to a fatal accident of a celebrity in Vermont in the winter of 1887.  It is not hard to imagine injury and death resulting from plunges from a sixty-foot tower.

One unexpected injury occurred in Traverse City’s slide.  W.D. C. Germaine, a colorful personality and future mayor of Traverse City, decided to impress the ladies with a daredevil exploit: he would ride the chute on a coal shovel.  And that he did, forgetting that friction between the shovel and the slide generates a great deal of heat.  At the end of the run, it is said he had two great blisters on his behind.

Though the toboggan towers disappeared in many towns before the end of the 1880’s, tobogganing as a sport continued for decades afterwards.  In 1924 plans were made for a toboggan trail that would run down Boughey Hill (the hill where the Country Club is located), joining Pine Street until it reached 14th.  Facing opposition from that neighborhood, the Kiwanis Club constructed a another run on the Country Club golf course that descended south from the tallest hill, crossing a seldom-used Cass Street, and ending up at Boot Lake, a pond between that road and Boardman Lake.  It was said to give “a thrilling ride for 400 yards.”  Apparently, the threat of traffic on the road was not enough to discourage those wanting the speed and excitement of toboggan fun.

At this time sleds and jumpers were as common as toboggans.  “Flexible Flyers” made it possible for riders to steer the sled with feet or hands when descending a slope.  Used in limited places in the country–the Traverse area among them–jumpers were often made from a single wooden ski.  A wooden seat was mounted on it from which the rider would (attempt) to guide the vehicle with his/her feet.  The contraption was not stable and often pitched its rider into the snow: Riding a jumper was not a sport for those afraid of injury.

In more recent times, Boughey Hill was the place for sledding, the course proceeding through the woods, challenging sledders to avoid colliding with trees.  As newly constructed homes interfered with that route, an open area had to be found, but there was scant space within the city proper.  As always, the wide expanse of the Country Club golf course was the place young children gathered for winter fun but no thrilling toboggan runs were set up.  The hills and valleys close to the clubhouse provided enough thrills for families.

Times change and toboggans give way to skis and ski boards—at least for teens.  That is what happened in Traverse City in the second half of the twentieth century.  Hickory Hills to the west and Holiday to the east presented marvelous slopes with lifts, warming houses, instruction, and a panache that made those places fine hang-outs for the young.  High schools offered skiing as a recognized sport, heightening interest still further.  The thrills of a sixty-foot toboggan run of the 1880’s were duplicated by a fast run down a ski slope in the 2000’s.  Then as now, the young will find a way to enjoy the winters of Northern Michigan. 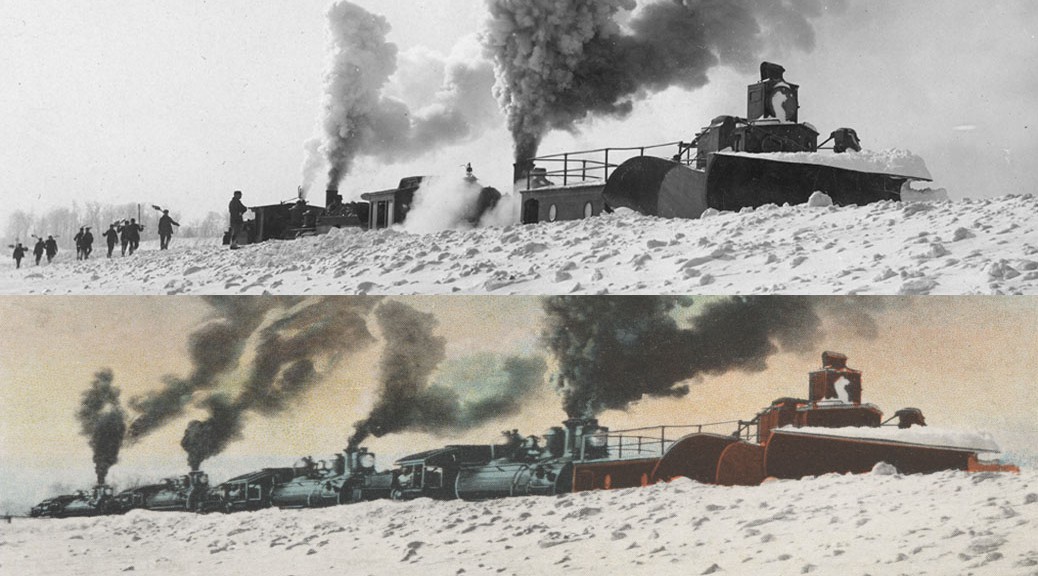